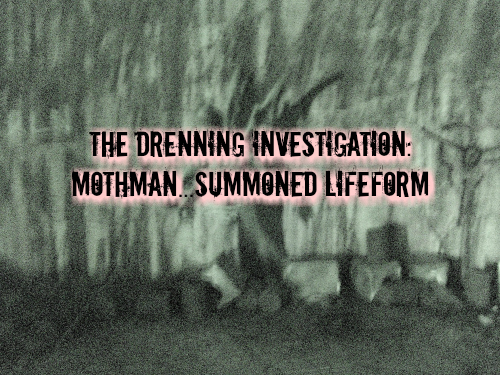 I have been given a rare opportunity to present investigative information, from a current case, on the 'Phantoms Monsters' blog.

On June 13th, I posted Terrifying Encounter on the Seneca Trail. This account detailed an encounter a client and his daughter endured on a mountain road in West Virginia.

I have been given permission by my clients, a very cordial couple Jeff & Krystle Drenning, to describe some of the horror they have sustained since the day they visited the middle bunker at the TNT plant located outside of Point Pleasant, WV. Their story was presented on Paranormal Witness - The Mothman Curse, but the situation has continued to erupt in their home.

Krystle contacted me approximately 2 months ago, asking if I could help alleviate the malevolent activity. If you watch the video from the television program, you can get an idea of what has been going on in their life for these many years. I have conducted several sessions for this family, and have determined that they are dealing with 2 distinct entities. One is an ancient Earthbound energy, most likely from an early native people. That is the entity heard in the EVPs...and it has followed the Drennings since their first visit to Point Pleasant. It is also responsible for Jeff's encounter with the winged anomaly. I have long theorized that the Mothman, and other unknown winged beings, are multi-dimensional lifeforms...that can be summoned by high-energy incorporeal entities that reside on our Earth plane. I believe that these lifeforms are used in a variety of ways, which includes deployment as a sentry or watcher. The second energy, which is causing poltergeist-like activity, was most likely present at their current home when they moved in. The combination of these energies is wrecking havoc on the family.

I personally believe that Jeff & Krystle encountered the ancient native Earthbound energy in the TNT bunker...and unwittingly welcomed it into their lives while conducting the EVP session. This is not an uncommon phenomenon. Experienced and novice paranormal investigators alike, can be subjected to these energies...resulting in an attachment that can cause many undesirable consequences in the future. It is vital that some form of physical and psychic protection is in place, before any investigating begins.

I am in the process of assessing which remote methods I will use in order to help this family find peace. If you are interested in some of my work, please go to Astral Perceptions Universal.

'Paranormal Witness' talked to Jeff Drenning about the terrifying events up until 2014:

Have you always been generally interested in out-of-the-way adventures?

We've both had lifelong interests in the paranormal/unexplained, but this was our first foray into attempting an 'investigation.' Part of the allure that drew us to this area was the Mothman legend (mainly the Richard Gere film, The Mothman Prophecies), but also the American history that has taken place in the area as well.

When you first heard the words on the recording, what did it feel like?

Utter disbelief. It's hard for words to capture the feeling we experienced upon hearing those first few words. We nearly went into a state of shock. We barely spoke a word to each other for the next few hours while we attempted to process what had happened.

When these things started happening in the house, did you connect them to the recording?

Definitely. Prior to capturing the initial recordings there was no activity of any form; we led normal lives.

The night where the cabinet opened and dishes shattered, and then when the spoon wound up in your bed, what did you think at the time?

We knew it was another manifestation of the activity we had been experiencing. It had taken many forms at this point to garner our attention, but we now realized it was getting more physically aggressive.

When you started researching Mothman, what was the most interesting bit of information you discovered?

Beyond comparison we found the most interesting aspects of the story to be those that weren't typically known. We hadn't heard about anything outside of the core Mothman sightings until our research led us to read John Keel's The Mothman Prophecies. The events in Point Pleasant involved far more than the appearance of a winged cryptid. There were also strange phone calls to some of the Mothman witnesses, visits from 'Men in Black,' poltergeist-like activity and rampant UFO sightings throughout the region. We found that our experiences mirrored many of those that took place in the late 1960s.

Have you ever had a moment where you tried to think up non-paranormal explanations to what happened? What were they?

Our initial reaction to hearing the recordings was to somehow rationalize it. We attempted to explain it away via the possibility of someone having followed us and somehow managing to reply to our questions on the recordings.

This, however, would have been an impossibility. The bunker is in a completely desolate area, with only one access point (which we used). There were no other cars parked along the road where we parked, we saw no other people on the trail. We were completely alone, beyond a shadow of any doubt.

Also, the way the bunkers are constructed in a dome shape causes the slightest sound to reverberate and echo. If someone else was speaking from outside, we'd have heard the echo of their voice (just as we heard the echo of our own). The voice in the recording had no echo at all. It defied any reason we attempted to place on the situation.

As for the activity that followed, no, there is no possible way it has a rational explanation. Anything that happened to us and we attempted to debunk, we came up glaringly short. Simply put, there is no explanation for what we have experienced.

When did you decide to go back to the bunker to communicate with the Mothman?

We have always felt that whatever we communicated with at the bunker was some sort of ancient intelligence, which we believe to be connected in some manner to Mothman and the events that took place in Point Pleasant during the late 1960s. We went back the next day to attempt to further communicate with the entity. In the beginning we didn't feel threatened; we felt as if something was reaching out to us for some reason, almost as if we were 'chosen' by it.

WHAT IS THAT TERRIFYING GOO?! What was the texture like? Where did it come from? What on Earth?

We have no idea what the substance was. It was a sticky, earthen-feeling texture. Almost like an extremely sticky form of mud. It would literally appear out of thin air. Krystle was once hit in the back with it while her back was turned towards the wall. It somehow manifested behind her. That was the scariest aspect concerning the goo, that it would literally appear out of nowhere with no warning.

How did you feel when you left the house?

When we moved out of the house, we initially felt hopeful that we could leave all of it behind. However, we were rightfully wary in the belief that if it followed us from Point Pleasant it could follow us anywhere.

Has anyone ever expressed skepticism in the story? What do you tell them?

Yes, but we simply state that what we experienced actually happened and all we can do is tell our story. The rest is up to them to decide. We're typically very guarded in who we share our story with.

What kind of advice would you give someone who finds themselves realizing there is a presence?

First and foremost, they need to realize that it isn't some type of game. Very real damage can happen. Don't be afraid to seek help, regardless of whether or not you think people will believe you. They need to know there are things that can be done to empower yourself. We hope to turn our negative experience into a positive, and possibly help those in similar situations. We want to shed light on the fact that there is more out there than just haunted houses.

How is everything now?

We still have experiences to this day. Just last night we had knocking on our bedroom door. A few weeks ago I was touched on the shoulder by an unseen hand, and Krystle was awoken by a smack to the face. These are only a fraction of the continued experiences we've had. We've had a priest bless our home twice, which seems to help for a limited time. However, the priest has said that he believes an exorcism may be warranted.