Essay on My UFO Experience 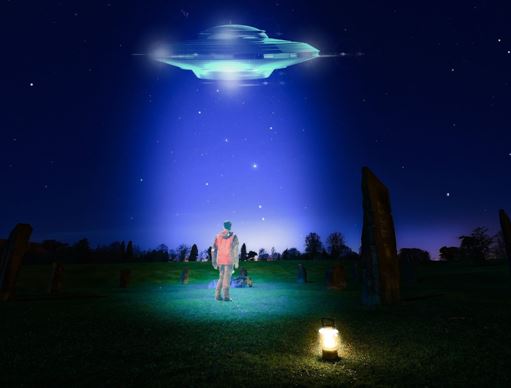 Before you laugh at the title, Essay on My UFO Experience, understand that there are a large number of people who believe that they have seen UFOs. If you have never been fortunate enough to have an encounter with an unidentified flying object (UFO) it's easy to understand your skepticism. After all, if these entities are truly unknown, then who's to say what they could be? However, if you have seen something unidentifiable in the sky above you, then you understand the reality of their existence.

For me, the experience happened as a young child in my parent's back yard. I had discovered a love for astronomy very young, and my parents purchased a telescope for me. It wasn't very high powered or exceptionally scientific, but it allowed me to see the craters on the moon and I found that fascinating.

One night, all alone out back, looking up at the moon something caught my eye off to the right just as I'd pulled back from the telescope. I looked up and there above me were three triangular shaped objects, each with lights at its three points. They did not move. They did not make the sound. They simply stayed in that position high above me.

I couldn't move. I couldn't speak. My mouth hung open in awe and wonder. I knew as I looked up at these alien lighted crafts, that I saw UFOs. Now, I had heard stories as a kid about aliens, and I always found the stories to be completely ridiculous. So, imagine my utter surprise and disbelief when these things arrived.

Needless to say, I packed up my telescope and headed off to bed. I turned the radio on in my room, as I always listened to music to go to sleep. What I heard shattered my resolve, there wasn't music but some robotic other-language conversation. I quickly shut the radio off and lay in bed terrified the rest of the night.

The next morning, for fear of being called a liar, or hysterical, I did not tell my parents. Instead, I went to my youngest brother who was always my friend and confidant. I had high hopes that he would hear me out with empathy and that he would stand to watch with me that night in case the craft made a second appearance. Though he agreed to do so, he laughed at me anyway. Sadly, I never saw the works again and have, for the most part, never shared my experience.

Over the years I have done periodic research on the subject and have learned a good many things. It is my desire to share some of that research with you here so that you too can understand just how dangerous the situation is.

It would appear that in 1960 the US attempted to learn if there was alien life in the galaxy. They listened in on the universe, so to speak, to see if any intelligible transmissions were occurring. While their research, Project Ozma, did not reveal anything useful, it did set the stage for further research and attempted "listening" to other scientists.

Of course, most people associate UFOs with Area 51, a highly classified Air Force facility in Nevada. In fact, there have been some movies and books based on what people think that they are doing there. And, if you read the piece in Popular Mechanics, The Real Story Behind the Myth of Area 51, it's easy to wave off the reality of UFOs as merely secret government aircraft. But what if that's just a ploy to keep people less interested in the odd things they see in the sky?

History.com reveals that the first documented UFO sighting in the US happened in 1947 whereas the Soviet Union's first documented experiences often relegate to times in which that government was testing secret military rockets. It seems easy to push aside what people believe to be UFOs by just placing the explanation on government flight and missile projects, but what if that's all a ruse?

• What if you see a UFO?
• Here are ten things to do if you encounter a UFO:
• Stay calm.
• Retain your objectivity.
• Record it on your phone.
• Voice record your experience as well.
• Ask other witnesses to do the same.
• Do not disturb any area in which it may have landed.
• Try to determine its size.
• Try to determine its distance from you.
• Be prepared to protect yourself or evade anything that might exit the UFO.
• Report the sighting to a UFO research organization.

When you realize that even NASA astronauts have encountered UFOs, you might be more hesitant to discount ordinary people who claim to have seen them as well. I hope this piece makes you more educated on the matter and more empathetic of the experience.

This newsletter is licensed under a Creative Commons Attribution-Noncommercial-No Derivative Works 3.0 United States License.
Hotlinking of PM Media images and copyrighted material is strictly forbidden unless permission is obtained.
'Phantoms and Monsters' and 'phantomsandmonsters.com' is protected under the Lanham (Trademark) Act (Title 15, Chapter 22 of the United States Code)
'Phantoms and Monsters' was establish in September 2005 as part of PM Media
Copyright 2005-2017 Phantoms and Monsters / PM Media - All Rights Reserved
Lon Strickler at 9:55 AM
Share
‹
›
Home
View web version