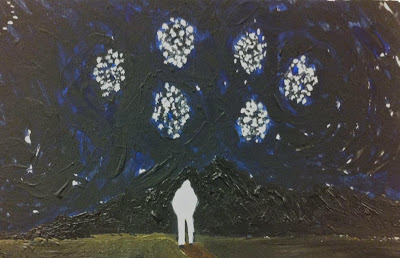 It was a couple of weeks ago, Thursday Sept. 18th. I was spending a week at a painting workshop staying at the Mabel Dodge Luhan House in Taos. In the middle of the night (3am) my eyes blinked open and sort of on automatic pilot I got my flashlight, walked down an unknown path off the hotel grounds into the desert (which I later found out was Anasazi land), and looked up to see a marvelous sight...6 or 7 dense, huge, bright clusters of stars, roughly diamond shaped clusters, lights turning on and off like someone was playing with a light switch. The sky around these discreet clusters was blue/black...like islands in a dark ocean, the little dipper was over my left shoulder fairly low in the sky. I've been told it was probably something from Los Alamo's. I went in for my annual physical and the doc said to stop taking Ambien, that I was sleepwalking. A friend asked suspiciously "Were you the only one there"?, another friend sited an article in the NYTimes on lightening-induced 'sprites'.

I suppose there's an alternative conclusion but what is so strange and compelling for me is the fact that I'm not comfortable in nature even with friends and for sure I wouldn't go out alone in the middle of the night to a desert I didn't know existed. I'm also a germaphobe. This sounds so dumb but i have my indoor slippers that NEVER go outside but I slipped them on without hesitation. I had in fact not gone on the 2 field trips during the painting workshop because I'm pathologically afraid of snakes, all reptiles, but not even easy with dogs, cats, insects, dirt...well you get the picture, nature woman I am not! So for me to without hesitation wake up and walk into the desert without an iota of fear is just impossible when I reflect on it.

I did a painting the next day to capture what I saw so will attach it.I'd love to know if anyone else in the area saw what I saw. I stood out there for about 15 minutes until i heard a dog start howling and decided to go back inside.
best,
CP

p.s. I'm pretty sure it was Sept 18th but it could have been a night before or after. - MUFON CMS

I recently received this report from a witness in Marion, Michigan:

I have written to you a few times before about what I have seen and the videos I have filmed of UFOs here where I live but on the 26th of Sept, 2014, something happened that I couldn't believe.

I was in my home around 9:00-9:30 pm and I heard a car running so I went out to look. I found two cars pulled over to the side of the road with a third one just pulling over too but I couldn't see what they were looking at until I looked up. There was a MASSIVE AMOUNT of UFOs flying all over above the field behind my home. They were NOT planes. I grabbed my video camera and started filming. There was no sound except for the crickets and I even captured a large triangle that hovered and another UFO landed on it and then took off. There were so many of them I couldn't film them all. They were coming from all directions but they usually come from the field which is due west behind my home. I got some shots with two or three in the same shot. Planes can not get that close to each other without crashing. While all this was going on the satellite to my tv kept being interrupted and had to keep being reset. Also the battery to my video camera that is an 8 hour battery had about 1/4 charge left just suddenly went dead. I went in and charged it some but when I went out to film some more it suddenly went dead again.

The next night I went out to check again and there was activity that night also, the 27th, just not as much. This time I got my neighbor, her children, and grandchildren to witness the UFOs with me. One of the kids reported seeing a tall light grey human like creature with a large funny shaped head go running very fast across the lot behind my home. I did not see this so I can not say whether it was real or not. I am a little inclined to believe it because my neighbor and I both have had someone or something outside of our homes for a few nights but unable to catch whoever it is.

I am telling you this is a hot spot for UFOs! I was amazed at the amount of crafts that were there. I would have to say about 50-60 different ones. I couldn't film them all. Last night I spotted some also but not near as many and I didn't film because I was so tired from not sleeping for the previous two days.

I think this place really needs to be investigated! The field behind my home is never worked by farmers, never mowed by anyone, yet the grass and weeds never grow there and when looked at from above on Google Earth, it looks like there are possibly some sink holes and I know some Artesian wells. My whole village sits above hundreds of Artesian wells and maybe that's why they are here.

I hope you get the chance to read this because it was amazing!

Surfer Loses Both Hands To Shark In Australia

SYDNEY -- A man had part of his arm torn off by a suspected great white shark while surfing off the coast of Western Australia on Thursday, officials said.

The man was surfing at Wylie Bay in the town of Esperance on Western Australia's remote southern coast when he was attacked by what is believed to be a 13-foot great white, Esperance Shire President Malcolm Heasman said.

A fellow surfer managed to get the victim to shore and to a nearby parking lot where there was an off-duty ambulance officer, Heasman said. The officer gave the man first aid while they waited for help to arrive.

The victim lost one arm below the elbow and had extensive injuries on his other arm, likely from trying to fend off the shark, Heasman said.

Australian media reported that he man lost both hands, one below the elbow and one at the wrist.

The man, who was a visitor to the area, also had lacerations to his legs. He was flown to a hospital in Perth for treatment and was in stable condition.

Within hours of the attack, fisheries officers caught a great white shark that was between 10 and 15 feet long, the state fisheries department said. It was not immediately clear whether it was the same shark responsible for the attack. Officials were planning to examine the animal. - WFMy News 2

A woman from Oklahoma City has been arrested on child abuse charges after a 7-year-old girl told authorities she had been beaten, burned and tortured while the woman was dressed in a witch costume. Officers were called to a home in southeast Oklahoma City after the alleged suspect tried to take the victim to Griffin Memorial Hospital. According to the police affidavit, 49-year-old Geneva Robinson told employees at the hospital that she could not control the girl anymore. The 7-year-old child looked to be malnourished and had numerous burns and bruises across her body, according to the police report.

The report says the victim’s ankles had cuts around them and were infected. Her wrists had marks “which had the appearance of possibly being bound.” Authorities say the 7-year-old girl claims Robinson, her grandmother, would dress up as a witch and abuse her. The girl told a DHS worker that Robinson would wear a green mask, take her to the garage, bind her wrists at night and make her sleep on a pair of pants because “she was in trouble.” The child says the witch’s name is “Nelda.” “Nelda” would allegedly “take a pink dog leash and hang the victim in the middle of the garage underneath her arms” and tell the girl “the creatures in the attic were going to come get her.”

The child also said that she would be hit with an orange and black whip. “If it wasn’t serious, it would be laughable,” said Tracie Spillman, a neighbour. “I can’t believe it. I just think that’s not true.” “It’s not true at all,” said Joshua. Joshua, who refused to give his last name, actually lives in the home with the suspect. He describes the alleged victim as a troubled child and denies the suspect had an evil witch alter ego. “She’s never dressed up as a witch to punish any of the kids,” said Joshua.

For their part, police claim what they found inside the home seems to back up the victim’s story. “The evidence at the scene corroborated what she was saying,” said MSgt. Gary Knight, Oklahoma City Police Department. “There were whips and chains and a witch’s hat found there. Just a completely horrible situation for a child to be in.” Another grown adult who lives in the home also allegedly told police he got the witch treatment, claiming the suspect kicked him in the genitals on a regular basis. Robinson was booked into the Oklahoma County jail on a $10,000 bond. All four young children who live in the home were placed in protective custody. - KFOR 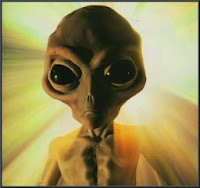 How Belief in Alien Beings Varies By Religion

Marina Chapman story: Kidnapped, dumped in the jungle and raised by monkeys

Thuggees – the Cult Assassins of India

Memories of the Afterlife: Life Between Lives Stories of Personal Transformation