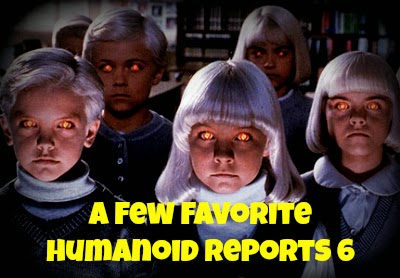 Over the years, I have referred to and posted many humanoid reports, some supplied by my friend & colleague Albert Rosales at Humanoid Sighting Reports & Journal of Humanoid Studies. The following reports are a few more of my favorites I've gathered over the years: 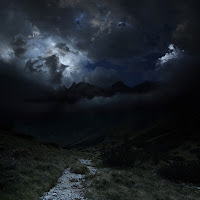 THE SOUNDS OF DISTANT THUNDER

Carlos was bicycling back home after visiting family and was using a side road in order to avoid the heavy traffic. Soon about 500 meters ahead he noticed what appeared to be two large luminous eyes staring at him. As he approached the eyes the bicycle light turned off and Carlos movements seemed to become lethargic.

A short figure with large luminous eyes approached the witness and ordered Carlos to follow him. The figure remained 4 meters ahead of Carlos, who seemed unable to resist and followed the creature to a field were a large lighted object rested on the ground. A ramp descended to the ground and Carlos entered the craft, followed by two more short humanoids.

Inside he found himself in a lighted circular area with what appeared to be a square table in the middle of the room. In a corner stood a taller more heavyset figure with large luminous eyes. For some unknown reason, Carlos knew that this creature was the "leader." He described the figure as having a huge oval shaped hairless head, with large black eyes lacking any pupils. It had two holes for ears, two holes for a nose and a slit like lipless mouth. The head was directly set on its shoulders, lacking a neck and appeared to have a hump on its back. It had dark gray skin, resembling that of an elephant, with long thin arms and legs. A bizarre feature was its hands, which ended in numerous thin filaments resembling roots. No apparent clothing was seen.

At this point the witness was very afraid but heard a mental message imploring to be calm, that they did not harm humans. A telepathic conversation ensued in which the humanoid invited the witness to come with them to their place of origin. The witness declined the invitation and was told that they understood his decision. He was then shown on a diffused screen on a wall a dry arid world apparently the humanoid's point of origin. He was also informed that they could transform their bodies and appearance at will, and was given a brief demonstration.

Suddenly the witness was overcome by "darkness" and then passed out. When he woke up he found himself lying on the road next to his bicycle at about 2200. He suffered from severe insomnia for the next two weeks and from terrible nightmares. He found several round red marks around the belly button area and circular marks around his under arms. Later under hypnosis he was able to remember that at one point onboard the craft he was taken into a room where he saw numerous objects resembling telephone booths. He was asked to enter one of them, once inside a bright blue light covered his body. Once outside he looked inside another one of the booths and saw a figure identical in appearance to him. Before leaving he was told by the leader to keep an eye for the sign of their return by being aware of "the sounds of distant thunder." 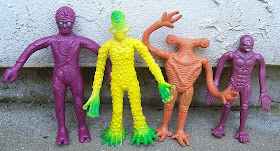 In 1975 or 1976 there was some commotion in Kuantan, Malaysia, when a strange encounter with a 3-inch-tall man-like creature was reported. The incident occurred about 9 miles from the town of Kuantan. The small UFO which ferried the tiny entity is said to have landed at the Royal Malaysian Air Force Base.

There were three young witnesses to the encounter. The third witness, not mentioned in the newspaper account below, is known to be still schooling in Kuantan. Attempts have been made to locate this witness. The whereabouts of the other two witnesses is not known and it is conceivable that they have moved to other Air Force installations in the country with their parents.

Below is a short account of the incident as it appeared in the local newspaper:

"Kuantan, Thursday – A 3-inch-tall creature said to resemble a human being, has become the talk of the RMAF base here since its reported sighting, by a schoolboy two days ago. The story has also spread to the town.

"Paul Lazario, 9, a pupil of the RMAF Primary School said he saw the creature two days ago near a drain at the RMAF field. It was stopping to drink water, he added. ‘I caught it but it escaped from my grip and ran into some undergrowth near the drain,’ he said.

"It had two feelers on the head and held a steel-like rod in its hand. A pistol was hanging from its waist. It was brown in colour and looked like a man,’ he added.

"Paul said he related the incident to his friends and in the evening three of them went to the spot near the field. And according to schoolboy, Neo Lee Ann, 12, all three saw the creature moving about on the area. ‘When it saw us, it ran into the undergrowth and disappeared’ he said.

"A teacher of the school, Mr. Yew Kim Guan, said when he heard the story he went to investigate. ‘There was no sign of the creature in the area, but I saw a Red Indian-like wigwam beautifully weaved out of grass. It was partly crushed,’ he said.

"He added he didn’t know whether to believe the story,"

Five witnesses observed what they described as an alien "glide" across a field. The witnesses described the being as about 5 feet tall with long slender extremities. It carried a brown "staff" about 5 feet long. It was observed for about a minute from a distance of about 250 feet. No apparent disturbances to the area around the being were reported. The creature appeared to glide about 6 inches above the ground, according to the witnesses. Weather conditions were cool and clear with no wind. No sounds were reported and witnesses commented on it seeming abnormally quiet at the time. Crickets and other normal background noises were absent. The witnesses lost sight of the being when they drove a short distance up the road to an area which they thought would offer a better view, only about 75 to 100 ft from where the being was seen. A small knoll obstructed their view as they drove. When they got to the closer location, the being was gone. The witnesses returned home after the encounter. They reported no serious effects from their sighting, although three of them did claim to be very tired the next day.

NOTE: another strange tale from the Laurel Highlands of Southwest, Pennsylvania. This area is one of a few that facilitates sightings of Bigfoot/UFO/cryptid cats/alien beings and everything in-between...Lon 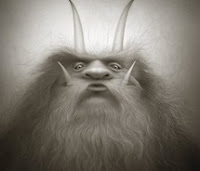 An ungodly looking creature created havoc among the local god-fearing Amish community. Witnesses described the creature as following: The size of a good heifer, gray in color with a white mane. It had tiger like fangs and curved horns like a Billy goat. It ran upright on long legs, and had long grizzly claws. In one incident, the creature sent a team of horses and two brothers flying when it approached their hay wagon. The following day, a man was cutting weeds on his farm about five miles from the previous incident when he heard a fierce roar and turned to see a monster with three horns and a tail charging in his direction. He raised his scythe to defend himself, only to have the implement ripped from his hands. At that point, the man wisely decided to turn both cheeks to the monster and escaped as fast as he could run. A day later a woman was feeding poultry on a farm midway between the two earlier incidents when she heard a commotion and turned to see the creature in the act of snatching a goose in each of its hands. She bravely ran toward the thing, waving her apron. The woman managed to recover one of her geese when the creature threw it at her, knocking her to the ground in the process. The interloper then escaped with the remaining bird in hand.

The main witness and his wife had bought a ranch in an isolated area in 1975 and for more than a year they had been experiencing strange sounds, UFO manifestations and Bigfoot sightings on the property. There were some cattle mutilations as well.

One night the man and the eldest son went up to the top of a hill to examine a burned spot from the previous year. As they sat in the car, a beam of yellow light shone on them from nearby woods. Walking towards the trees, they discovered a buzzing black box, clearly seen in the light of the full moon. As they approached, it changed tone, now sounding like a swarm of angry bees. The two retreated to the safety of the car. The witness told the young man to stay by the car and went back to the spot where the black box had been; it was now gone. He saw a light in the trees and, walking toward the light, came upon two individuals standing near the light source. As he approached, they spoke to him, saying "How nice of you to come." Some distance away, down a slope, was a disk, illuminated, about 50 or 60 feet away. The two beings apologized for the trouble they had caused, promising a more equitable arrangement. They told him several things he was not to repeat, but which had no special meaning for him at the time. They regretted damage done to several of the cars, but they did not acknowledge responsibility for any of the local cattle mutilations. They told him he was wise to have backed off from the black box, which was nearby. They pointed in a particular direction and the tone on the box changed; as it did, a Bigfoot type creature got up off the ground and walked toward the box. The tone changed and the creature dropped. The meeting lasted five minutes.

In appearance the beings were similar, human looking about 5'6" in height, and wearing a tight fitting outfit like a flight uniform. The suits changed colors from brown to silver. Their complexions were fair and they had blond hair, not long. The most notable features were the eyes, which were very large but otherwise normal looking. They were different in subtle ways but could pass as humans in ordinary situations. Before the witness walked away from the scene he was told by the beings that he would see them again.