PM Key 'Officially' Not A Reptoid 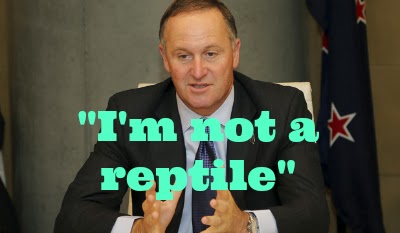 An official request was made, asking New Zealand Prime Minister John Key if there was "any evidence to disprove the theory that Mr John Key is in fact a David Icke style shapeshifting reptilian alien ushering humanity towards enslavement" Well...I assume the question needed to be answered:

He's been to a doctor and a vet just to make sure, but Prime Minister John Key is adamant he's not a shapeshifting reptilian alien.

Mr Key was unusually forced to deny any previously non-declared extraterrestrial connections to reporters after an Auckland man put in an Official Information Act (OIA) request asking for proof he might be one.

"To the best of my knowledge, no. Having been asked that question directly, I've taken the unusual step of not only seeing a doctor but a vet, and both have confirmed I'm not a reptile," a smiling Mr Key said today.

"So I'm certainly not a reptile. I've never been in a spaceship, never been in outer space, and my tongue's not overly long either."

Last month, Auckland man Shane Warbrooke put in an OIA request to the prime minister's office, asking for "any evidence to disprove the theory that Mr John Key is in fact a David Icke style shapeshifting reptilian alien ushering humanity towards enslavement".

David Icke is a British author who believes many world leaders are actually part of a plot to enslave the human race, driven by reptilian shapeshifting aliens.

Mr Key's chief of staff Wayne Eagleson replied to Mr Warbrooke, saying that the OIA request was declined under a section of the act because "the document alleged to contain the information requested does not exist or cannot be found".

Mr Warbrooke, a writer and musician, says he put in the OIA request as a joke alongside some other more serious requests as part of his research into UFOs.
He was happy with the OIA response, which was what he expected.

"But they waited the full 20 working days they are allowed before getting back to me."

When asked how he would describe himself, Mr Key said he was "just an ordinary Kiwi bloke". - 3News

Who's to say Prime Minister John Key isn't a reptilian overlord in disguise?

Key's own office certainly can't; its response to an official information request was that it had no data to disprove the theory.

The response came after Shane Warbrooke requested "any evidence to disprove the theory that Mr John Key is in fact a David Icke-style shape reptilian shifting alien ushering humanity towards enslavement".

Key's chief of staff responded this month, saying "no such information existed" to probable cries of "they would say that" from conspiracy theorists.

David Icke is a former British footballer and broadcaster who descended into ridicule after claiming he was the "Son of the Godhead" and promoting conspiracy theories, which he has since turned into books.

At the heart of his theories lies the idea that a secret group of reptilian humanoids called the Babylonian Brotherhood controls humanity, and that many prominent figures are in fact reptilian. - Stuff

NOTE: Author David Icke has been 'outing' public figures as 'reptilians' for many years. He's written extensively on the subject. I've read several of his books and, frankly, I don't see any proof. It's an interesting theory...and if true, would explain many unanswered questions. Still, I just don't buy into Icke's conjecture. As far as reptoid beings...there may very well be a race or races of these life-forms. I can't say that I have witnessed a reptoid...but I've seen and heard a variety of evidence that does point to the possibility that a similar phenomena does exist. Lon

Human Race Get Off Your Knees: The Lion Sleeps No More

Children of the Matrix: How an Interdimensional Race has Controlled the World for Thousands of Years-and Still Does

The David Icke Guide to the Global Conspiracy