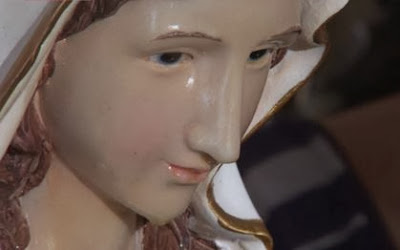 Crowds of people have flocked to a small town in Israel to catch a glimpse of the weeping statue.

The otherwise unremarkable sculpture had been purchased last year by the Khoury family who live in Tarshiha, near the Lebanese border. Nothing out of the ordinary had happened until very recently when Amira Khoury discovered that the statue seemed to be covered in an oil-like substance that was originating from its eyes.

"My wife came closer to the statue and found it was covered with oil," said her husband Osama Khoury. "She then wiped the oil, she was scared. She called our neighbour and told her to come and see what she saw."

As word got around, people from far and wide started to flock to the house to see the spectacle for themselves. To date more than 2,000 people have visited the statue, many of which now regard it to be a genuine miracle. Read more at SKY

THE SETON MIRACLES, Weeping Statues and Other Wonders with DVD of Eyewitness Testimony affixed to Inside Back Cover 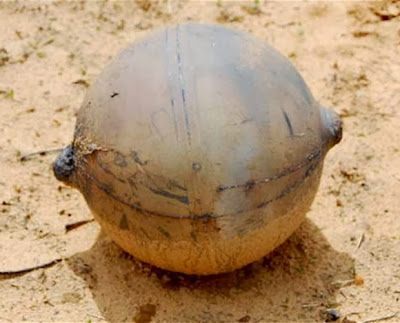 Officials from Namibia have been examining a hollow ball that fell from the sky back in November 2011. So far, they haven’t had much luck identifying it, so have called in NASA and ESA, hoping the space agencies can provide some answers. The spherical object has a circumference of 1.1 meters (43 inches) and was found in a remote area in the northern part of the country, about 750 kilometers (480 miles) from the capital Windhoek, according to police forensics director Paul Ludik, quoted in an article by AFP.

Ludik described it as made of a “metal alloy known to man” (so cross alien spacecraft part off the list), weighing six kilograms (13 pounds).

This isn’t the first time balls from space have dropped in on unsuspecting countries.

Space spheres found in Australia and Brazil in 2008.

Back in 2008 spherical objects fell to Brazil and Australia, and there have been previous reports of similar objects, as well.

After some post-crash forensics, the two objects in 2008 were identified the as a Composite Overwrapped Pressure Vessel (or COPV), which were carried on the space shuttles, and are a high pressure container for inert gases. COPVs have been used for a variety of space missions.

They are built with a carbon fiber or Kevlar overcoat to provide reinforcement against the vast pressure gradient between the inside and outside of the container, and so can survive re-entry through Earth’s atmosphere.

The one in Namibia was found 18 meters from its landing spot – it created a mini-crater 33 centimeters deep and 3.8 meters wide.

Other suggestions of what the object could be is a piece from a space gyroscope, a satellite part, a tank from one of the Apollo missions, or a part of a Russian spacecraft, (which have been known to crash to the ground, as well) - UniverseToday 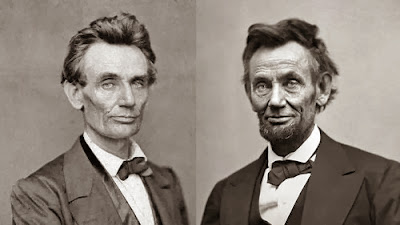 When the mapping of the human genome was completed in 2003, researchers discovered a shocking fact: our bodies are littered with the shards of retroviruses, fragments of the chemical code from which all genetic material is made. This discovery has created a new discipline, paleovirology, which seeks to better understand the impact of modern diseases by studying the genetic history of ancient viruses.

—Highly infectious viral diseases -including the Plague, yellow fever, measles, smallpox and he Spanish Flu, which killed 50 million people at the end of the First World War, moving from one cell to the next, transforming each new host into a factory that makes even more virus. In this way, one infected cell soon becomes billion -that die when the host dies.

—Endogenous retroviruses, however, once they infect the DNA of a species they become part of that species: they reside within each of us, carrying a record that goes back millions of years. Molecular battles of endogenous retroviruses that raged for thousands of generations, have been defeated by evolution.

These viral fragments are fossils that reside within each of us, carrying a record that goes back millions of years. Because they no longer seem to serve a purpose or cause harm, these remnants have often been referred to as “junk DNA.” Although many of these evolutionary relics still manage to generate proteins, scientists have never found one that functions properly in humans or that could make us sick.

That is until Thierry Heidmann who runs the laboratory at the Institut Gustave Roussy, on the southern edge of Paris, brought one to life. Heidmann long suspected that if a retrovirus happens to infect a human sperm cell or egg, which is rare, and if that embryo survives—which is rarer still—the retrovirus could have the evolutionary power to influence humans as a species becoming part of the genetic blueprint, passed from mother to child, and from one generation to the next, much like a gene for eye color or asthma.

In a brilliant essay if The New Yorker, author Michael Specter brought Heidmann’s discovery to life, showing how by “combining the tools of genomics, virology, and evolutionary biology, he and his colleagues took a virus that had been extinct for hundreds of thousands of years, figured out how the broken parts were originally aligned, and then pieced them together. After resurrecting the virus, the team placed it in human cells and found that their creation did indeed insert itself into the DNA of those cells. They also mixed the virus with cells taken from hamsters and cats. It quickly infected them all, offering the first evidence that the broken parts could once again be made infectious. The experiment could provide vital clues about how viruses like H.I.V. work. Inevitably, though, it also conjures images of Frankenstein’s monster and Jurassic Park.”

Heidmann named the virus Phoenix, after the mythical bird that rises from the ashes, because he is convinced that this virus and others like it have much to tell about the origins and the evolution of humanity.

“This is something not to fear but to celebrate,’’ Heidmann told Specter one day as they sat in his office at the institute, which is dedicated to the treatment and eradication of cancer.“What is remarkable here, and unique, is the fact that endogenous retroviruses are two things at once: genes and viruses. And those viruses helped make us who we are today just as surely as other genes did. I am not certain that we would have survived as a species without them. The Phoenix virus sheds light on how H.I.V. operates, but, more than that, on how we operate, and how we evolved. Many people study other aspects of human evolution—how we came to walk, or the meaning of domesticated animals. But I would argue that equally important is the role of pathogens in shaping the way we are today. Look, for instance, at the process of pregnancy and birth.’’

Heidmann believes that without endogenous retroviruses mammals might never have developed a placenta, which protects the fetus and gives it time to mature, which eventually led to live birth, one of the hallmarks of human evolutionary success over birds, reptiles, and fish. Eggs cannot eliminate waste or draw the maternal nutrients required to develop the large brains that have made mammals so versatile. “These viruses made those changes possible. It is quite possible that, without them, human beings would still be laying eggs.” - DailyGalaxy


Unbelievable: Investigations into Ghosts, Poltergeists, Telepathy, and Other Unseen Phenomena, from the Duke Parapsychology Laboratory

The Poltergeist Phenomenon: An In-depth Investigation Into Floating Beds, Smashing Glass, and Other Unexplained Disturbances

Ghosts, Apparitions and Poltergeists: An Exploration of the Supernatural through History