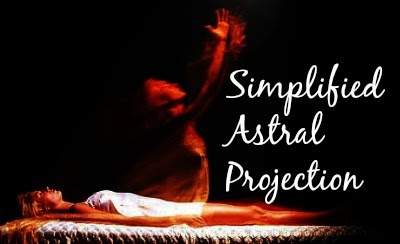 Robert Monroe’s 1971 book, Journeys Out of the Body

describes a rather long and complicated technique for inducing OBEs. The following is a simplified summary of Monroe’s method:

1. Lie down in a darkened room in a comfortable position, but with your head pointing towards magnetic north. Make sure you will not be disturbed.

2. Loosen your clothing and remove all jewelry and metal objects, but make sure you keep warm.

3. Begin by entering into a relaxing state of both mind and body. Then consciously tell yourself that you will perceive and recall everything that occurs during the upcoming process which will be of benefit to your being.

4. Begin breathing through your half-open mouth.

5. Enter the state bordering sleep, known as the “hypnogogic state”, by concentrating solely on one particular object. When other thoughts start intruding and you lose focus, you have entered the hypnogogic state.

6. When these other images start to enter your mind, watch them passively, this will also help you maintain this state of near-sleep.

8. After a while you may observe light patterns, take no notice, they are only neural discharges which are of no significance.

9. When these cease, you enter a deeper state of relaxation where you lose all awareness of the body and sensory stimulation. You are almost in a void where your only source of stimulation will be your own thoughts.

10. With eyes closed, look out into the blackness at a spot about a foot from your forehead. Concentrate on this spot, and then move your consciousness to a point three feet away, then six, then turn it 90 degrees upwards, reaching above your head.

11. Mentally draw down the “vibrations” from this point above you into your body. You are now entering the vibrational state, sometimes indicated by a tingling feeling, as if electricity is rushing through your body.

12. Learn to control the vibrational state by concentrating on the waves of vibrations and mentally pushing them from your head down through your entire body to your toes. Practice this process until you can perform it on command.

13. Now you have control of the vibrational state you are ready to experiment with leaving your body. The most straightforward technique recommended by Monroe is the “lift-out”. To employ this method imagine yourself getting lighter and of how pleasant it would be to float upwards.

14. Be sure to keep control of your thought and don’t allow any extraneous material to enter your mind and interrupt them. You will soon find yourself floating upwards above your body – your first OBE.

15. With enough practice of this method, Monroe claims that a whole other world of experiences will open up to you.

Adventures Beyond the Body: How to Experience Out-of-Body Travel

The Journey of Robert Monroe: From Out-of-Body Explorer to Consciousness Pioneer

Fukushima radiation: US West Coast will likely see peak by end of 2015

Scientists keeping tabs on the eastward voyage of radioactive byproducts from the 2011 Fukushima Daiichi nuclear-power-station disaster in Japan suggest that radioactivity from the byproducts should peak off the US and Canadian coasts by the end of next year. After that, they are expected to begin a gradual decline to background levels.

The chief concern: Radioactivity from cesium-137, the longest-lived of two forms of cesium released in the disaster, which ocean surface currents have carried east. At its peak, levels of radioactivity from cesium-137 will still fall far below levels that the US and Canadian governments deem unsafe for drinking water, according to data in a study published Monday in the Proceedings of the National Academy of Sciences (PNAS).

The nuclear power station lost emergency power when it was hit by a tsunami triggered by a magnitude 9 earthquake offshore on March 11, 2011. As a result, the plant couldn't keep reactors cool or spent-fuel pools filled. Three of four reactors partially melted, while hydrogen explosions wracked buildings containing the reactors. The event released significant amounts of radiation, including leaks of radioactive water to the ocean.

Combined with background levels of cesium-137 radiation that remain from above-ground nuclear-weapons tests conducted in the 1950s and '60s, the additional cesium-137 from Fukushima is projected to push the isotope's watery radiation levels back up to where they were in the 1980s, the study indicates. At that time, radiation from cesium-137 in fish tissue was so low that people were far more concerned about mercury in tuna than cesium.

The PNAS study builds on research described at an ocean-sciences meeting in Hawaii last February. The work relied on data gathered between 2011 and 2013 from a string of 26 sampling sites that began at the Juan de Fuca Strait and stretched westward for more than 1,000 miles.

The team looked for cesium-134 to herald the arrival of Fukushima's cesium-137. Nuclear reactors produce both, but cesium-134 loses half its radioactivity every two years. Cesium-137, with its 30-year half life, is the more worrisome of the two forms isotopes. If researchers detected only cesium-137, they knew they were looking at the post-nuclear-testing background. If they saw both forms of cesium at the same time, they knew Fukushima's cesium-137 had arrived and could estimate its contribution beyond background cesium radiation levels.

Cesium-137 from Fukushima reached the western end of the sampling string in 2012, and by June 2013 had reached sampling sites on the continental shelf, noted John Smith, a chemical oceanographer at the Bedford Institute of Oceanography in Dartmouth, Nova Scotia, at the time.

The new study includes additional data taken in February 2014, data that the team finished processing during the summer, writes Dr. Smith in an e-mail.

"The conclusions haven't changed," he writes, referring to projections that even at its peak, radiation from cesium-137 should remain far below levels that are deemed a threat to human health or to the environment.

If the added data haven't altered the team's basic conclusion, they have helped sift among competing projections offered by other research teams. In one projection, cesium-137 levels were slated to begin rising in late 2014 with a peak around 2017. The other had an earlier onset to the increase, with the peak coming in late 2015.

Data available last February were too sparse to provide a reality check on the models. With the additional data, however, the second projection seems the most likely, providing "greater certainty in future projections of the Fukushima radioactivity signal in the eastern North Pacific Ocean," Smith writes.

Dr. Buesseler and colleagues have enlisted citizen scientists to gather water samples for analysis in a monitoring project that uses crowd-sourced funding to underwrite the effort.

The sample was collected in August about 100 miles west of Eureka. It contained cesium-134, whose radiation was recorded at 2 Becquerels per cubic meter of water, more than 1,000 times less than the US Environmental Protections Agency's maximum level for drinking water. - CS Monitor

The Shanghai government said that large crowds started to stampede in Chen Yi Square on the Bund just before midnight, with authorities working to rescue and aid the wounded.

The trigger for the stampede has still to be confirmed, but state media and witnesses said the incident was at least partly caused when people tried picking up fake money thrown from a building.

A man who brought one of the 48 injured to a local hospital for treatment said fake money had been thrown down from a bar above the street as part of the New Year's Eve celebrations. People rushed to pick up the money, triggering the stampede, said the man, who gave his family name as Wu.

Cui Tingting, 27, said she had picked up some of the bank notes but had thrown them away when she realised they were fake.

"It's too cruel. People in front of us had already fallen to the floor, and others were stepping all over them," she said.

Another witness, who gave his family name as Wei, said there also had been a problem away from the area where the fake bills were thrown, with people trying to get onto a raised platform overlooking the river.

Dozens of distraught relatives gathered in the hospital lobby waiting for news, with some expressing frustration over a lack of information as police held them back.

"Many relatives have asked to go inside and asked the hospital to give us a list of the injured, including the conscious and unconscious ones who are being treated in there, but nobody got back to us," said a relative who gave her family name as Fan.

"Six hours have passed, but we still don't have any information," she added.

Xinhua news agency said many of the dead and injured were students. Some were young children.

President Xi Jinping has the Shanghai government to get to the bottom of the incident as soon as possible, and ordered governments across the country to ensure a similar disaster could not happen again, state television said.

The Shanghai government said on its official microblog that an inquiry had begun.

Photographs on Weibo, the Chinese version of Twitter, showed densely packed crowds of revelers along the Bund where buildings from Shanghai's pre-communist heyday face the Huangpu River and house upscale restaurants, bars, shops and hotels.

Some photographs showed rescue workers trying to resuscitate victims lying on the pavement while ambulances waited nearby.

Authorities had shown some concern about crowd control in the days leading up to New Year's Eve. They recently cancelled an annual 3D laser show on the Bund that last year attracted as many as 300,000 people.

At dawn on Thursday, there were still small crowds of revelers trying to find taxis home and workers were clearing up trash strewn around the Bund. There was little sign of the mayhem that had broken out just hours earlier.

In 2004, 37 people died in a stampede in northern Beijing, on a bridge at a scenic spot, during the Lunar New Year holiday. - emirates247

A Chinese businessman who bought and ate three tigers has been sentenced to 13 years in prison. During the trial the wealthy real estate developer, identified only by his surname Xu, had "a special hobby of grilling tiger bones, boning tiger paws, storing tiger penis, eating tiger meat and drinking tiger blood alcohol". Xu organised three separate trips last year for a total of 15 people, including himself, to Leizhou in the southern province of Guangdong, where they bought tigers for a "huge amount of money" that were killed and dismembered as they watched.

One of the party filmed the entire process of a tiger slaughter on his mobile phone. That footage was later obtained by police. Police also seized eight pieces of animal meat and bones from a refrigerator in Xu's home, some of which were later identified as tiger parts, adding that 16 geckos and a cobra were also found. Earlier this year a court in Guangxi convicted the group of 15 of "illegally transporting precious and endangered wild animal products", but the conviction was not reported at the time.

Xu was sentenced to 13 years in prison and fined 1.55 million yuan (£160,000, $250,000). The others were jailed for terms ranging five and six-and-a-half years and given smaller fines. The group appealed and a higher court upheld the ruling on Monday. Tiger bones have long been an ingredient of traditional Chinese medicine, supposedly for a capacity to strengthen the human body, and while they have been removed from its official ingredient list, the belief persists among some.

It is a long-held belief across parts of Asia that penises of animals such as tigers and seals can boost men's sexual performance. However, there is no orthodox scientific evidence for such claims. Decades of trafficking and habitat destruction have slashed the tiger population from 100,000 a century ago to approximately 3,000, according to the International Union for the Conservation of Nature's Red List of threatened species, where the tiger is classed as endangered. - abc.net.au

Grimoire for the Green Witch: A Complete Book of Shadows