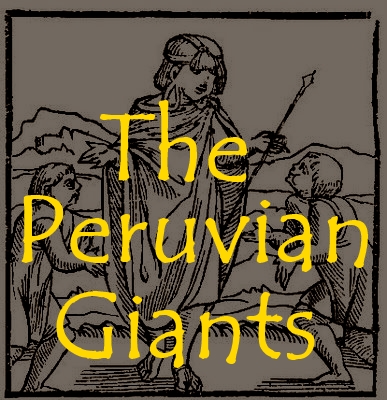 I was reading an excellent article about the Conquistadors supposed encounters with giants. These stories originated from seemingly most areas of the New World. But, for centuries, the legends of giants in the jungles and highlands of Peru were the most known. Along with tales by the local tribes, the Incas and subsequent explorers described a variety of giant-sized beings in the region. There have been a few modern discoveries that bolster these speculations. The following is an updated post from 2011 that includes a few interesting narratives and links:

A one-eyed Indian tale of battling a band of red-haired hunchback giants has caused speculation that a tribe of stone-age aborigines may inhabit the jungles of northern Peru.

The men were described as olive-skinned, barefooted, hunched-back, more than 6 feet 6 inches tall with feet twice the normal size.

One scientist this week said he doubted their existence, but a well-known amateur anthropologist said it was well within scientific probability.

The giants have only been reported in San Juan Province, an area of rain forests and wooded foothills east of the Andes. Its 200,000 residents have no telephone service or paved roads.

Rumors of giant tribesmen have circulated frequently in the past. They received fresh momentum early this month when an explorer said he had stumbled across such a tribe.

Carlos Tarrealza, discoverer of the ruins of a lost Indian city in San Martin Province said he had found the giants when he was lost for two weeks in the jungle.

He said they were clad only in animal skins with reddish hair and spoke a dialect he had never heard. He said they fled at his approach.

La Prensa said the tribesmen had abducted three women and wounded five men in the camp before being driven off by shotgun blasts. Ultima Hora said 5 men, 3 women and 2 children had been injured, but did not mention any kidnapping.

The director of the regional center of Indian remains, Cristobal Cresapana said, "I don't believe in the existence of these hunch-backed men...they correspond to precisely none of the racial traits of the people seen in the Andean region so far."

But Carlos A. Silva, a policeman and amateur anthropologist who traveled widely in the Peruvian Jungles, said the indigenous Peruvian could adapt himself very easily to live in the forested areas of the Andean foothills. - St.Louis Post-Dispatch - May 23, 1976 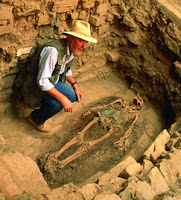 Tomb of "Giants" Unearthed in Peru

The remains are Moche, a culture that thrived on the desert-like coast of northern Peru between A.D. 100 and 800. A farming and fishing community, they constructed irrigation canals, pyramids, palaces, and temples.

The origins of the Moche remain unknown, according to lead archaeologist Christopher Donnan. The skeletons, found during a 1997-99 National Geographic-funded expedition, may yield clues to their culture. - Jennifer Mapes - National Geographic News - February 15, 2001

Giants of the Royal Incas

Nine-and-a-half feet tall is large for a human mummy, especially when it is found among today's diminutive Peruvians, whose average stature is just five feet. Understandably, professional anthropologists find tales of ancient giants amusing, but nothing more. Physical evidence may nonetheless exist to demonstrate that an oversized race of men did indeed dominate parts of prehistoric South America.

There are petroglyphs along mountain paths and at the sites of ruins such as Tiahuanacu, but there are also petroglyphs right downtown Lima associated with the adobe pyramids. Nobody has chronicled these structures. There are several of them right in the middle of one of the major cities of the world. One would have thought that someone from the Discovery Channel would have produced a show on these structures. However, they haven't! It almost never rains in Lima and these adobe pyramid structures were built somewhere between 400 AD and 1000 AD. Even now anthropologists refuse to make any connection between the old and new worlds before the arrival of Columbus. The entire text can be found at Giants of the Royal Incas

"As there is in Peru a story of some giants who landed on the coast at the point of Santa Elena, in the vicinity of the city of Puerto Viejo, I have resolved to mention what I was told about them, as I understood it, without taking into account the opinions of the common people and their various anecdotes, for they usually magnify events larger than life. The natives, repeating a story received from their forefathers from very remote times, say that there came from across the sea on reed rafts that were as large as big ships some men that were so big that an ordinary man of good size scarcely reached up to their knees: their members were in proportion to the size of their bodies, and it a monstrous thing to see their enormous heads and their hair hanging down about their shoulders. Their eyes were as large as small plates. They say they had no beards and that some of them were clad in the skins of animals, and others only in the dress nature gave them. There were no women with them. On reaching this point, they set up their camp like a village (and even in these times there is a memory of the site of their houses). As they found no supply of water they remedied the lack by making some very deep wells, a labor certainly worthy of record, being undertaken by such strong men as these must have been, to judge by their size. They dug these wells in the living rock until they came to the water, and afterwards they built the wells in stone from the water line upwards so that they would last for ages. In these wells the water is excellent and it is always so cold that it is very pleasant to drink.

"When these great men or giants had thus made their settlement and dug these wells or cisterns, they destroyed and ate all the supplies they could find in the neighborhood. It is said that one of them ate more than fifty of the natives of the land; and as the supply of food was not sufficient for them to maintain themselves, they caught much fish with nets and gear that they had. They lived in continuous hostility with the natives, because they slew the latter's women in order to have them, and they also slew the men for other reasons. But the Indians were not numerous enough to kill these newcomers who occupied their land and lorded it over them; and although they held great discussions about this, they never dared attack them. 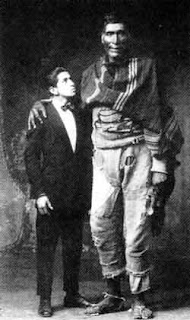 "After some years the giants were still in this region, and as they had no women of their own and the Indian women of the neighborhood were too small for them, or else because the vice was habitual to them and inspired by the demon, they practised the unspeakable and horrible sin of sodomy, committing it openly and in public without fear of God or personal shame. The natives say that our Lord God, unwilling to conceal so wicked a sin, sent them a punishment suited to the beastliness of the crime, and when all the giants were together engaged in this accursed practice there came a fearful fire from heaven to the accompaniment of a great noise, in the midst of which a shining angel appeared holding a sharp, bright sword with which he slew them all at a single stroke, and the fire consumed them leaving only a few bones and skulls, which God allowed to remain unconsumed as a token of the punishment. This is the account they give of the giants, and we believe that it happened, for it is said that very large bones have been found and still are found thereabouts and I have heard Spaniards say they have seen pieces of teeth which they thought must have weighed half a pound when whole, and who had also seen a piece of a shin-bone of wonderful size, all of which bears witness to the truth of the incident. In addition to this one can see the places where the sites of their villages were, and also the wells or cisterns they made. I cannot state whence or how these giants came there.

"In the present year of 1550 when in the city of Lima, I heard that when his excellency Don Antonio de Mendoza was viceroy and governor of New Spain, certain bones of men as big as these giants, and even bigger, were found there. I have heard too that in an ancient sepulcher in the city of Mexico or somewhere else in that kingdom certain bones of giants have been found. Since so many people saw them and attest having done so, it can therefore be credited that such giants did exist and indeed they may all have been of the same race.

"At this point of Santa Elena, which is as I have said on the coast of Peru and in the district of the city of Puerto Viejo, there is a remarkable phenomenon: the existence of certain wells or seams of pitch of such excellent quality that it would be possible to tar all the ships one wished with it, since it flows from the earth. This pitch must be from some seam passing through that place: it comes out very hot,etc. - Royal Commentaries of the Incas, volume I, chapter XI - Pedro de Cieza de León

A very strange abnormal-looking mummy with giant head has been unearthed in Peru.

The discovery was made in the Cuzco region, the heart of Incan civilization.

Researchers find the mummy extremely odd. The mummy simply does not fit in with the version of history that we have all been taught.

The mummy's head is triangular and its eye cavities are very big.

"It's 20 inches tall, which doesn't coincide with the stereotypes of humans. It's head is triangular and the eye cavities are too big.

The opening at the top of the head also calls for attention, and it has wisdom teeth and molars that also don't coincide with any human being," explains anthropologist Renata Davila.

According to Anthropologist Pablo Bayabar, "children's heads are proportionally bigger than their bodies.

Here we have two points.

First, the fontanelle is open, which usually closes at 31 months. And it has molars that usually appears between approximately 13 and 19 months.

So we are looking at a child under two years old with an enormous head."

Pablo Bayabar believes the mummy could have been a human sacrifice.

"This is possibly a human sacrifice, common during Pre-Incan and Incan times. Historians have written for example that during the times of the famous 'capacocha'-situations where the Incans died or could have died-they sacrificed children in the areas close to large mountains to honor the mountains," Bayabar said.

The mummy is currently at the Ritos Andinos Museum in Andahuaylillas, some 685 miles southeast of Lima and scientists plan to examine it in more detail. - forwarded by reader - March 2012 Click for video - Is Peruvian Mummy a Giant Toddler?

NOTE: Do these giant beings still inhabit Peru? This video was captured a few years ago by a distressed girl - Giants Filmed in Peru. Here are a few more interesting links - Human Giants - OOPARTS - Giants...Lon

Genes, Giants, Monsters, and Men: The Surviving Elites of the Cosmic War and Their Hidden Agenda

The Ancient Kingdoms of Peru