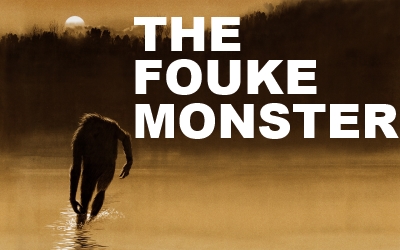 . There have been several fascinating sightings over the past 100 years. I received the following correspondence in June 2011 in reference to an encounter that occurred east of Texarkana, Arkansas. The sister of the witness (who lives in Florida) forwarded the account:

Hello Sir - My brother and his wife had a shocking event on May 5th, 2011 when they were driving home to Genoa, Arkansas from a visit with his in-laws in Texarkana. He was driving east bound on Tennessee Rd (County Rd. 16) at around 7:30 pm and had just gone by Mosely Rd. when a creature suddenly jumped out of the trees and brush, crossed the road and blended into the thick woods. It was headed in the direction of Old Bitty Lake.

They both had a decent look at it and say it was about 6 foot tall and very stout with huge legs and feet. It was covered with very long reddish-brown hair that had dirt and debris stuck to it. When they stopped the car to look into the direction it went into the woods they got a whiff of a horrific stench (the windows were open).

I had heard the tales of the 'Fouke Monster' since I was a young girl but never bought into the hype. We actually lived near the Mercer Bayou at one point and talked to several people who verified the stories. My brother doesn't dare identity himself since he feels that it may cause problems but he felt there was a need for a warning.

I do believe him because he has never lied to me and is a very trustworthy, hard-working man. He is also a very experienced outdoorsman and knows the swamps and backwoods of southwest Arkansas liked the back of his hand. But this has left him shaken, to the point where he was at a loss for words when talking to me. That is VERY unlike him.

That's about all he had to say. Can you tell me of other sightings in the area? Respectfully, Dorothy 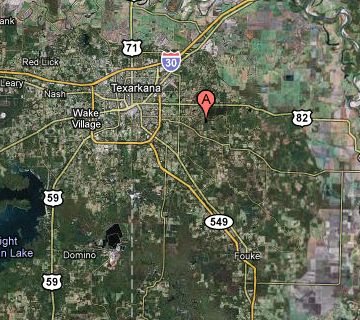 NOTE: I've read many accounts about Arkansas swamp monsters over the years...none much different that this account. The area where this sighting supposedly occurred is only 10-15 miles north from the area of the 'Fouke Monster' incident...Lon

There have been many creatures and legends come from the swamps of Arkansas. The Fouke Monster is certainly one of the strangest. This six-feet-tall, hairy, humanoid monster gained notoriety in the late 1960's when it harassed two families living outside this town in the southwest part of the state. The monster is reported to have smelled awful and made a habit of killing chickens and livestock and mauling a number of dogs. The story became so popular that a low-budget horror movie called The Legend of Boggy Creek 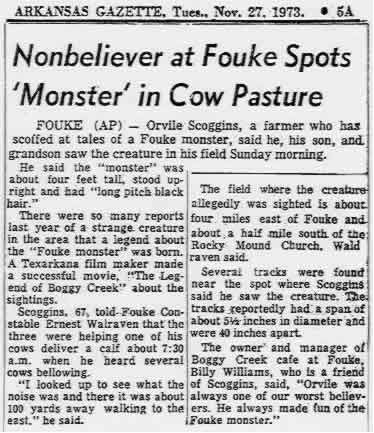 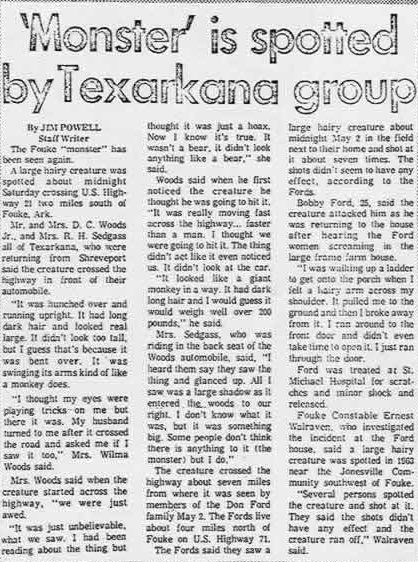 Documented Sightings of the Fouke Monster

1932 Near Fouke, Arkansas (Jonesville) – Man sees a hairy, man-like animal from his porch. It quickly moved out toward the fence on the property and disappeared into the woods.

1946 Near Fouke, Arkansas – Woman sees a strange animal in the field by her house. According to the local sheriff, she said "it looked kind of like a man, and walked like a man, but she didn't think it was a man." Texarkana Gazette.

1955 Near Fouke, Arkansas (Mercer Bayou) – Experienced hunter/trapper sees a large gorilla-like creature while fishing in a river. It appeared to be washing its hands before it walked off on two legs into the trees.

1955 Fouke, Arkansas – Man sees a large, hairy ape-like creature near his house on Boggy Creek. He shot at it 15 times with a rifle, but apparently missed. Victoria Advocate.

1964 Near Fouke, Arkansas (Jonesville) – Teenage girl sees a tall, hairy, two-legged creature lurking in the yard of her rural home one evening.

1965 Near Fouke, Arkansas (Mercer Bayou) – Hunter sees a seven-foot tall, hairy man-like animal in the woods. As he approached, the creature disappeared into the thick underbrush.

1965 Near Fouke, Arkansas (Jonesville) – Teenage boy encounters a hairy man or ape-like beast near a lake on his family's property. It was described as seven-foot tall with "reddish-brown hair about four inches long all over its body. It stood upright like a man, but had extra-long arms." As the thing approached, he fired at it with his shotgun three times and then fled. Sasquatch: The Apes Among Us (Hancock House Publishing, 1971).

1965 Near Fouke, Arkansas (Jonesville) – Another teenage boy sees the alleged monster in the woods while deer hunting. He fired his gun at the creature before running away.

1967 Near Fouke, Arkansas – Man sees hairy, man-like creature run across a road while driving on a rural road near his house.

1970s Exact year unknown / Near Fouke, Arkansas – Man and his son see the alleged monster running on two legs across their field. The creature appeared to be wounded. (As told to director Charles B. Pierce.)

1971 May / Fouke, Arkansas – Bobby Ford, Don Ford, Elizabeth Ford, and Charles Taylor claim to see a seven-foot tall, hairy creature several times during the night as it approached their rent house and stuck a hand through the window. Investigators later found evidence of scratches on the house and three-toed tracks in the yard. Texarkana Gazette.

1971 June / Near Fouke, Arkansas – Three people see a "tall hairy creature with red eyes" during the evening hours. It appeared to be "squatting" on an embankment at the edge of the woods, across the street from their home. Texarkana Gazette.

1971 June / Fouke, Arkansas – Two men from Kansas report seeing a strange, two-legged animal standing on the side of the road. Texarkana Gazette.

1990 October / Near Fouke, Arkansas – Two men from Oklahoma smell a pungent odor while driving on Highway 71. They pull over and see a tall, man-like creature covered in shaggy black hair running toward the south bank of the Sulphur River. It was running upright and had a face that was "much more human-like than a chimpanzee or a monkey." Texarkana Gazette.

1997 September / Near Fouke, Arkansas – A man, while working on his car in the driveway, sees a "large, dark-brown creature" standing in the woods watching him. He approached the creature and observed it for several minutes. Deciding to retrieve his gun, he went back to his house. When he returned, the creature was gone, but he eventually spotted it again, sitting in woods. He continued to observe the creature until dusk made it too hard to see. GCBRO (www.gcbro.com).

1998 July / Near Fouke, Arkansas – A woman babysitting some children sees a "very large, hairy creature" watching them from the edge of the woods while on a morning walk. Frightened, she quickly returned to the house. GCBRO (www.gcbro.com).

2000 January / Near Fouke, Arkansas – Hunter observes a "hairy man-like creature approximately eight-foot tall" walking in a wheat field during the late afternoon. The wheat field was approximately two miles from the Sulphur River along Boggy Creek. The creature was also described as having a musky smell. TBRC (www.texasbigfoot.com).

2000 October / Near Fouke, Arkansas – A bowhunter sees a "big black figure" approaching his tree stand before dawn. The creature reached up and grabbed his arrow with a "large black hand, very similar to the hand of a gorilla." TBRC (www.texasbigfoot.com).

2001 Near Fouke, Arkansas – Hunter comes face-to-face with a large, ape-like creature while hunting near Mercer Lake.

2010 May / Fouke, Arkansas – While driving on a County Road late one evening, a married couple sees a large, hairy creature run on two legs across the road. Light precipitation was falling, but the figure was visible in the headlights as it made its way across the pavement and into the trees beyond. The couple turned the car around to get a better look, but was only able to get one final glimpse of the creature standing in the trees before it disappeared in the darkness.

2011 September / Fouke, Arkansas – Nearby resident sees a large, bipedal creature with dark fur standing next to a hay bail as she drove down a County Road late one evening. As the car approached, the creature suddenly darted across the road running very fast on two legs. The creature came within 3-4 feet of the car, causing the driver to hit the brakes, before it disappeared into the brush on the other side of the road.

2012 October / Fouke, Arkansas - Local resident sees a hairy, ape-like creature run across a County Road a few miles south of Fouke during daylight hours. The witness felt that the creature fit the description of the Fouke Monster and was confident that it was not an ordinary animal. The sighting occurred near a location where other sightings have been reported over the years. - foukemonster.net

The Night We Saw the Fouke Monster

Smokey and the Fouke Monster: A True Story