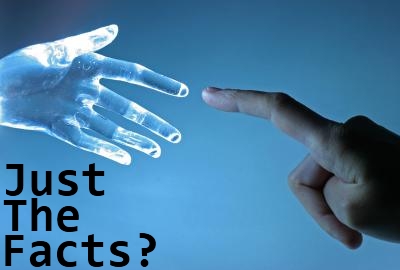 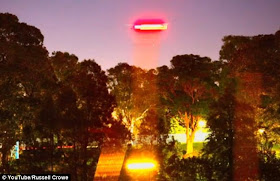 Russell Crowe has sparked a furore after claiming to have photographed a UFO outside the window of his office.

The Hollywood megastar posted a video on YouTube which he says could show a spaceship moving across the night sky.

The actor seems to have anticipated that some would be sceptical of his supernatural claims, as the clip was captioned 'THESE ARE REAL'.

He titled it: 'UFO? Time Lapse Photos Outside RC's Woolloomooloo Office (THESE ARE REAL!)'

The clip is a montage of five photographs apparently taken seconds apart, with a flash of red and yellow light moving across the screen.

The source of the light appears to be suspended in the sky above the trees which are the main focus of the images.

Mr Crowe later added: 'A friend and I set camera to capture fruit bats rising from Botanic Gardens, this was a big surprise'.

In a response to fans who suggested that the spooky effect came from the camera itself, he wrote: 'Canon 5D, no flash, can't be a lens flare because it moves, camera is fixed'.

A number of his online followers responded with ridicule, with one writing: 'Please never post anything online again Russell. It's just embarrassing.'

One even made fun of the star's past, saying: 'It's probably a telephone, flying past the window at someone's head.'

But some were more constructive, offering explanations for the phenomenon including suggestions the light came from a nearby mobile phone or car headlights.

Mr Crowe took to Twitter again today to refute suggestions that the photographs were manipulated in some way.

He wrote: 'I will grant you at the time the music wasn't playing, also, yes, we have pushed in on the frame... this is three photos in order, nothing added'.

The 48-year-old Australian came to international fame in LA Confidential, and went on to win an Oscar for his role in 2000's Gladiator.

He has also appeared in hits such as A Beautiful Mind, American Gangster and most recently Les Misérables.

His latest role is alongside Mark Wahlberg in Broken City, which has just been released in the UK and Australia, prompting rumours the UFO video could be nothing more than an attempt to drum up publicity. - Daily Mail

L.A. Exposed : Strange Myths and Curious Legends in the City of Angels

Take a Walk on the Dark Side: Rock and Roll Myths, Legends, and Curses

A woman was mauled to death by a lion as she made love to her boyfriend outdoors in Zimbabwe, it was reported today.

Sharai Mawera died yesterday after the big cat pounced while she was enjoying a romantic moment in the bush with her unnamed partner.

The My Zimbabwe news website reported that the predator attacked the couple at a secluded spot in the bush near the northern town of Kariba.

Ms Mawera's boyfriend, who has not been identified, is believed to have jumped up and fled in the nude when the lion lunged forward.

A source told the newspaper the young woman died at the scene.

He said: 'Unfortunately the woman was mauled to death by the lion, but her boyfriend managed to escape naked.'

The friend said: 'He is a fisherman and he used to often meet at the same spot with his girlfriend, who is now deceased.

'The two were romping when the incident occurred. The lion came from behind and roared.

'The guy managed to escape before stopping at a distance where he witnessed his companion being attacked.

'He later rushed to the road seeking help.'

My Zimbabwe reported that the terrified man managed to raise the alarm.

Local police and armed rangers from the Zimbabwe Parks and Wildlife Management Authority rushed to the scene.

The source said: 'Cops and officers attended the scene and fired a single shot before getting to the spot.

'The woman had already been killed. She had bloody bruises all over her body. Her neck and tummy had been mauled.'

Rangers launched a hunt for the lion following the tragedy, amid concern the same animal may have killed a local man who disappeared at the weekend.

The remains of the victim were found yesterday on the outskirts of the town, which lies near the Zambezi river.

Police believe the man, who has not been named, was mauled by a lion as he walked home from a nightclub.

Zimbabwe's state-controlled Herald newspaper reported that officers believed the fact the woman killed yesterday was mauled rather than eaten suggested the same lion could have been responsible for both attacks and not regained its appetite since devouring part of its first victim.

The newspaper added: 'Residents of the town are now living in fear as the lions are still roaming freely as there are yet to be caught.' - Daily Mail

Was that a drone flying over metro New York Monday?

That's what a pilot for Italian carrier Alitalia reported seeing from the cockpit of a flight landing at New York's JFK Airport. The pilot informed the air traffic control tower, and now his spotting has drawn the attention of both Federal Aviation Administration and counter-terrorism officials.

"The FAA is investigating a report... he saw a small, unmanned or remote-controlled aircraft while on final approach to Runway 31 Right," FAA spokeswoman Laura Brown says in a statement quoted by CNN. "The sighting was approximately four to five miles (from) the airport at an altitude of approximately 1,500 feet."

"He was very clear as to what he saw," a source tells the Post about the pilot's account of "a black drone."

Other than the pilot's sighting, the Alitalia flight landed at JFK without incident.

An aviation expert tells the Post it's possible the unverified flying object was an enthusiast's model aircraft. However, the expert – also unnamed – said he couldn't recall any other incidents in which such a model veered so close to a commercial aircraft.

Even if it was a remote-controlled recreational model, FAA guidelines say such objects may only fly to 400 feet high and must alert air traffic control if they are going to fly within three miles of an airport, according to CNN.

The object reported by the Alitalia pilot was at about 1,500 feet, ABC News' sources say.

CNN adds that "flying unmanned aerial vehicles is illegal for most business purposes; however, governments and public entities such as police departments can apply for permission to operate them." - USA Today

A county court in central China has sentenced four men to prison for digging up and selling corpses on the black market to enable "ghost marriages", a millennia-old custom of burying deceased bachelors alongside newly deceased wives so that they will not grow lonely in the afterlife.

On Saturday, the Xi'an Evening News reported that the Yanchuan county court in Yan'an City, Shanxi province, sentenced each of the men to more than two years in prison for stealing 10 female corpses, cleaning them up and counterfeiting their medical records to boost their prices, and selling them on the black market for a total of £25,000.

Ritual ghost marriages, which may date back to the 17th century BC, are increasingly rare in contemporary China – Mao Zedong tried to eliminate them when he assumed power in 1949 – but they are still practised in rural parts of Shaanxi, Shanxi, Henan, Hebei and Guangdong provinces. Families often employ a matchmaker to help find a suitable spouse for their deceased loved ones.

The four men, with surnames Pang, Bai, He and Zhang, exhumed the corpses in the winter of 2011 from a smattering of arid, coal-rich counties in Shanxi and Shaanxi provinces.

The state-run Global Times newspaper reported in 2011 that an influx of coal money to parts of northern Shaanxi province bolstered the area's underground corpse trade, with a newly wealthy but superstitious demographic suddenly being able to afford high prices for desirable postmortem mates. Some are known to purchase their corpse brides straight from hospitals, where they cut deals with grieving families.

This is not the first time that ghost marriage intermediaries have fallen on the wrong side of the law. One woman died over the lunar new year in February 2012 and was sold by her family to the family of a recently deceased young man for about £3,700; soon afterwards, police caught a graverobber selling her twice-exhumed body to another family for slightly less.

In 2009, a grieving father in Xianyang City, also in Shaanxi province, paid a team of graverobbers £2,700 to find a suitable bride for his son, who had died in a car crash. They were arrested for exhuming the remains of a teenage girl who had killed herself not long after failing her college entrance exams.

According to the Global Times, less affluent families who desire ghost marriages may use a non-human proxy for the corpse bride, such as a silver statuette or a doughy human-shaped biscuit with black beans for eyes. Some may buy an old, rotten corpse at a discounted price, dress it in clothing and reinforce its skeleton with steel wire.

The tradition has its own set of customs and rituals, including postmortem marriages with sumptuous feasts and dowries, according to the report. - Guardian

NOTE: I posted an article about this a few years ago - 'Ghost Bride' Practice Continues in China...Lon

Funerals to Die For: The Craziest, Creepiest, and Most Bizarre Funeral Traditions and Practices Ever

Tales of Lights and Shadows: Mythology of the Afterlife