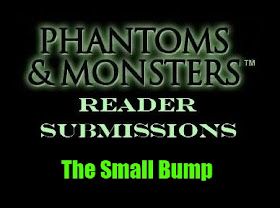 I received the following email this afternoon (12/27/12) and later talked to the experiencer by telephone:

Hello Mr. Strickler: I am giving you permission to publish my incident but I do not want any personal information disclosed. To begin, I had an strange incident when I was a child living in south Florida. I could never explain it and I did not want my family to know about it. It involved, what I believe, an abduction by alien beings. I don't remember the specifics other than I went to bed, got up to go to the bathroom but don't remember returning to my bed. When I woke in the morning, there was an ache in my neck and a small bump at the base of my skull. The pain went away quickly but the small bump remained. I never told my parents about it and they never noticed it. That incident occurred 54 years ago.

I now live in a rural township in eastern Ohio. My husband and I have lived here for over 40 years and are well-known within the community. My husband owns a business and employs several of the area's residents. We have raised 4 children and are also grandparents. We have been very happy with our life.

This past Christmas Eve, I was alone at home during the day. My husband was at work and some of my children and their families were visiting for the holidays. They had all gone out to visit friends and to do some shopping, so I was the only one at home.

Around 1:00 PM I decided to sit down in the club room and watch television. I had been busy all day cooking and doing a few other things, so I decided to take a break. I sat on the sofa and turned on the television with the remote control. As I was surfing channels the television suddenly went off. I just figured I had accidently turned it off with the remote, but I was unable to turn it back on. I got up and starting walking toward the television when everything went black. The next thing I remember is waking up on the sofa. My neck was very sore and I was laying on the sofa completely nude. My clothes were folded neatly and setting on the coffee table. I quickly dressed and noticed that the television was on and that the time was 2:48 PM. I went to rub my sore neck and noticed that the small bump that I had for 54 years was now gone. I went into the bathroom in order to look at the back of my neck with a handheld mirror. There was a 2 inch vertical red scar where the small bump had previously been.

Today is Thursday Dec. 27th, 2012. My neck no longer hurts and the scar has healed nicely. It is barely noticeable. I had never told my husband about my incident as a child but yesterday I explained everything to him. He is very open-minded and believes in UFOs and other strange things. I also told my older son about it and he suggested I contact you. I believe he reads your articles and that you have talked to him in the past.

My older son believes that I experienced an abduction. In fact, my husband agrees with him as well. Like I stated earlier, you have my permission to publish if personal details are removed. I have included my contact information below. Thank you for your time. SK

NOTE: It seems that SK is an alien abductee. There were a few other incidents described in our telephone conversation but SK didn't want me to disclose this information at this time. I do know her son BTW...I plan to talk to him very soon. I'm going to keep this incidnt on 'the back burner'...I may want to investigate it further as more information is divulged. Lon

How to Defend Yourself Against Alien Abduction

High Strangeness - Hyperdimensions and the Process of Alien Abduction