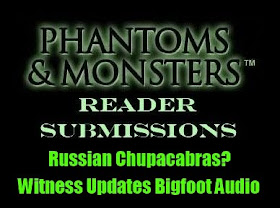 I received this report from Georgi Bonchev in Bulgaria:

Traces of Chupacabras in the Russian city Emanzhelinsk

In the early morning Nafiya Suleymanova went into the garden to feed the dog. There she noticed odd steps. It seems they were left by an animal with long legs with four fingers. Judging by the tracks it looks like the beast is armed with impressive claws. Surprisingly, tracks starts from the middle of the garden, go through the fence and go to an abandoned house. Similar traces exist in a vacant lot. According to the lady, her garden is visited by chupakabra. Her daughter, however, believe that their guest was an ancient reptile.

- "I have no explanation for this. Clearly visible tracks and nails in them. As if someone had jumped, maybe a dinosaur" - said Elvira Suleymanova.

A series of attacks by chupakabras took place about a year ago. The terrible beast was seen in Emanzhelinsk, Karabash, Kopeysk, Korkino, Verhneuralsk and other cities. According to people the predator is interested in rabbits and chickens living in cages. After the November 2011 attacks stoped, but traces still can be found in the local forests.

Video - Traces of Chupacabras in the Russian city Emanzhelinsk

Georgi's comments: I am not surprised that one of the women thinks that this is chupakabra and the other one compares it with a dinosaur. In March 2012 I translated the following material:

Was there really a vampire who fed on dinosaur blood?

Back then a reader of MISTERIKA assumed that chupakabras may be descendants of these small dinosaur-vampires who survived to the present day. This theory seems more likely now.

Wild and Weird; or, Remarkable stories of Russian life.

Heroes, Monsters and Other Worlds from Russian Mythology (The World Mythology Series)

Ben H. forwarded audio from an encounter he and his wife had in Clipper Mills, CA.:

My wife and I had an encounter that I captured on audio its on youtube here is the link if you have any questions ask away enjoy!

Comments with video: This is an audio from July 8, 2012 near Clipper Mills, CA. It is 100% real as it happened. It has improved sounds and wave sound visualization patterns have been added.