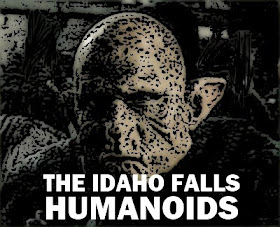 In Autumn 1967 there were at least three UFO with humanoid sighting reports from eastern Idaho (all were in the Idaho Falls metro area). These reports were filed and investigated by NICAP (National Investigations Committee on Aerial Phenomenon). Two of these reports follow...the other witness did not want to reveal his name, and was reluctant about discussing the details of his encounter: 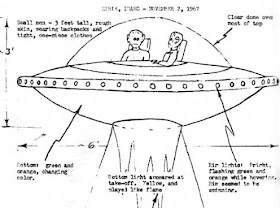 Guy Tossie and Will Begay, two Indian youths, were driving south on Highway 26 just outside Ririe on November 2, 1967, when, about 9:30 p.m., there was a sudden blinding flash of light in front of their car, followed by the abrupt appearance of a small, domed UFO. The dome was transparent and in it were seen two small, strange-looking occupants.

The car was brought to a stop - Begay, driving, did not have to apply the brakes - and the object hovered about five feet above the highway immediately ahead of them. It was about eight feet wide, and flashed green and orange lights around the rim. The area was bathed in a vivid green light. (Compare this with Mrs. Moreland's report, above)

The dome opened as if hinged and one creature emerged, apparently floating to the ground. It was about three and a half feet tall, and on its back was a kind of pack that protruded above and behind its head. Its face was oval and heavily pitted and creased. Two small, round eyes and a straight, slit-like mouth completed the facial features. Large ears stood high on the hairless head.

Approaching the driver's side of the car, the alleged being opened the door and slid behind the wheel. Horrified, the two witnesses pushed over to the right. The car began to move - whether driven by the being or "towed" by the UFO was uncertain. It was taken well out into a field of stubble wheat, and the UFO kept a fixed position a few feet in front of it.

As the car stopped, Tossie, sitting next to the door, suddenly opened it and bolted, running for the nearby farmhouse of Willard Hammon about a quarter of a mile away. He later reported being followed by a bright light - presumably carried by the second occupant.

Meanwhile, in the car, Begay cowered in the front seat in a state of near-shock while the first creature jabbered unintelligibly at him, making sounds that were high and rapid, "like a bird." The second being, who had apparently given up chasing Tossie, returned to the car. The first then got out, and the two beings "rose up and into the UFO," which then ascended in a zigzag path.

Meanwhile, at the home of Willard Hammon, Tossie could scarcely make himself understood by the astounded farmer and his family. After having calmed the Indian down, they accompanied him back to the field, where they found the car. Begay was sitting nearly speechless with fright, his eyes tightly closed.

The engine was running and the lights were still on - about 15 minutes had elapsed from the moment the young men had seen the flash. Hammon listened to their story and then followed the frightened youths home in his car. Perplexed, he later stopped in a local bar and grill to see if he could learn anything more. While there, a county deputy sheriff stopped in and Hammon told him the story. Later, both witnesses also came by and voluntarily told the deputy sheriff, in their own words, what had happened. State Police were summoned and an investigation was begun. It was discovered that a number of local farmers had reported that their cattle had bolted during the evening for unknown reasons. Others claimed to have seen lights in the area.

The report was investigated for NICAP by C.R. Ricks, of Idaho Falls. During his investigation, he learned of a man who claimed that, on the same night, he had a similar encounter. Ricks eventually tracked this man down and confirmed the report, although the witness was emphatic about not revealing his name, and was reluctant about discussing the details of his encounter. - NICAP 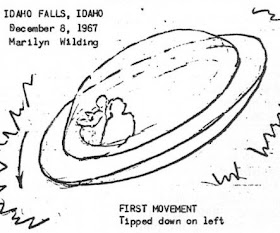 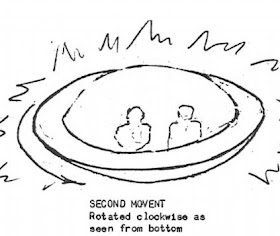 On the night of December 8, 1967, Marilyn Wilding, age 15, of Idaho Falls, went out on her front step to look for a friend coming by to pick her up. It was about 7:40 p.m. The evening was dark and overcast, cold, with snow on the ground. Miss Wilding's attention was attracted to a light source reflecting on the snow and glancing upward she saw a large light above, partially obscured by the roof of her house.

Stepping out into the yard, she saw a large, brightly lighted object hovering not far above the end of her home. It was so bright that she was unable to perceive any other color than white. The object was circular in shape, "about as big as a car."

She told the NICAP investigator that it was close enough for some one to have thrown a rock at it and hit it.

As she stood looking, the object tipped and rotated partly so that she was able to see that it had a domed top. In the dome, which was transparent, she could make out the indistinct outlines of two figures, but she was unable to make out any details because of the glare. She ran into her house and called for her younger sister to come and look, but the youngster was barefoot and did not come out. Miss Wilding then ran back outside in time to see the object begin to rotate, in a clockwise direction as seen from below. It maintained its tilted attitude while rotating, and therefore gave the appearance of wobbling. With this motion, it began moving away toward the north. As it receded into the distance, the light dimmed and turned orange in color.

The UFO's departure was observed from inside the house by Miss Wilding's younger brothers and sister, who had been alerted by the witness. (Mr. and Mrs. Wilding were not at home at the time of the incident occurred.) In her written report, Miss Wilding also gave the names of the Schuldt family, neighbors, as witnesses.

At its closest, the object was no more than 100 yards away, and from 50 to 100 feet above the ground. The incident lasted for approximately three minutes. Miss Wilding's sighting may also be compared with another incident that occurred at Ririe, Idaho, a little more than a month earlier. 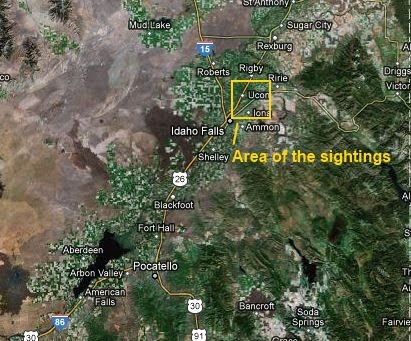 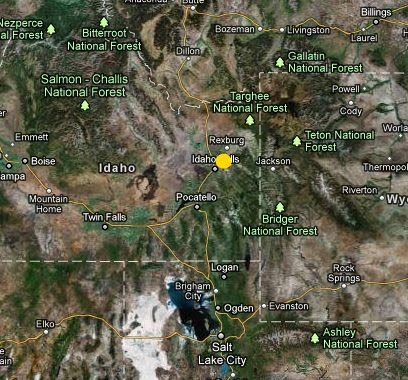 Strange: Unexplained Tales from Idaho and Beyond