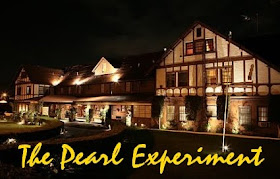 LOS ANGELES, CA - FEBRUARY 18, 2012: A team of Los Angeles based paranormal researchers conducted an experiment at the Glen Tavern Inn in Santa Paula, CA in an effort to learn if group intention could result in the physical manifestation of a thought form. Inspired by parapsychology experiments that were completed in the 1970’s by a team based in Toronto, Canada, the goal of the Los Angeles effort was to obtain audio or visual media associated with the thought form. Consisting of nothing more than mental energy, a fictitious personality that was given the name “Pearl” was described in a process designed to provide as much detail as possible in order for the participants to imagine that Pearl actually existed nearly a century before the experiment. The experiment was completed in secrecy just prior to a conference for paranormal enthusiast in 2007 with the hope that the attendees would be able to record the sounds attributed to Pearl or other evidence of her presence despite the fact our imaginary character was not physical. A photograph at the location was obtained shortly after the 2007 conference by an amateur sports photographer that appears to depict the thought form in a manner that would be physically impossible. A Los Angeles Police Department forensic photographer examined the photo then attempted to replicate the image without success. The original photographer and the LAPD CSI photo expert will both be present at the March event. The photograph of what appears to be the manifested thought form will be on display.

In order to advance new experiments away from subjectivity and move towards collecting objective data that demonstrates that group intention can alter a physical environment, a new experiment will be conducted at the conference in March. The prevailing premise for mind / matter interaction is that thought creates order from the natural randomness of matter. Attendees at this upcoming conference will be able to measure and see in real-time the effect that group consciousness will have on atomic particles by using an electronic Random Event Generator from Princeton University’s PEAR lab. Extensive studies have shown that cohesive thought by a group results in particles behaving more orderly which can then be observed as a result of a process known as quantum tunneling

Bill Murphy from the SyFy Channels hit series Fact or Faked: Paranormal Files will host the event, and a panel of nationally acclaimed speakers will be presenting on the topics of thought forms and new technology for the paranormal investigator. Attendees will have hands on access to newly developed equipment as well as be able to attend workshops on investigation and research methods. For more information and tickets please visit: www.ghosttown.tv

NOTE: this press release was forwarded to me by my friend Layla at LA Paranormal. I truly wish I could attend this conference...it is sure to be a fascinating event! Lon

Earth Mind, Earth Memories: How Ghosts, Tulpas, Strange Lights and UFOs' Exist Inside the Mind and Memories of the Living Earth