express - The fiery red eyes and the blood-curdling howls of ghostly Black Dogs have long haunted the pages of British literature.

From Arthur Conan Doyle’s The Hound of the Baskervilles to the sinister Padfoot in the tales of Harry Potter, time and again nailbiting stories have been woven around the legend of mythical huge dogs.

Whether such tales are just fiction is now open to doubt.

In recent years reports have continued to emerge of wolf-like Black Dogs seen roaming the country. Now zoologists and experts in the paranormal are calling for a probe to prove their existence.

Richard Freeman, zoological director at the Centre for Fortean Zoology in Bideford, Devon, said Black Dogs have been reported in Britain, across Europe and in South America. He said: “I would welcome support for a thorough investigation into their existence.

“If one could be captured on film or filmed with a thermal camera it might give us a clue to the nature of these creatures.” A report in this month’s Countryfile magazine details the legend of more than a dozen Black Dogs with such wild names as the Yell Hound of Devon, the Lean Dog of Tring, the Padfoot of Wakefield, the Gurt Dog of the Quantocks, Mauthe Dhoog of the Isle of Man and the Gwyligi of Wales.

Dr Simon Sherwood, senior lecturer in psychology, director of the Centre for the Study of Anomalous Psychological Processes at the University of Northampton, said: “Sightings of Black Dogs are certainly not just legendary accounts from hundreds of years ago. I still receive accounts from people who have been looking for information about similar sightings and have come across my website.

“I have probably collected about 50 or 60 accounts from around the world over the past 10 years or so and some of these are recent sightings.”

The Black Hounds of England 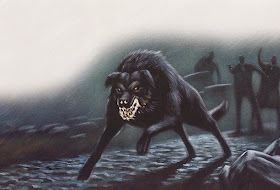 Sightings of the Black Hound have been reported all over England since the early 1500’s up until the present day. The Black Hound is often described as an abnormally large jet black dog the size of a cow or a bear, with large claws, fangs, matted or shaggy fur and glowing red eyes.

There are lots of stories about Black Hounds terrorising villages and attacking travellers, not many of which report sounds from the beast that are out of the ordinary, however some have reported a terrifying howl and even that the hound was maniacally laughing.

Accounts of the Black Hounds attacking aren’t uncommon. Suffolk, UK 1577, one Sunday it is claimed a Black Hound made its way into a church, two men who were touched by the beast fell down dead and a third man seemed to have died from severe burns.

Another account tells also of a Black Hound entering a town hall and physically killing two men before escaping.

Even now there are common sightings of the Black Hound. In 2003 a teenager reported seeing a Black Hound when on his way home around midnight, apparently the hound was seen lurking around the bottom of a tree next to a hedge (boundary) and was described as a large Black Hound with matted fur just a little smaller than a cow.

Other phantom dogs are more benevolent and stories exist of people being helped from tight spots. For example Augustus Hare in his book 'In My Solitary Life' recounts a common tale he heard about a man called Johnnie Greenwood, of Swancliffe. Johnnie had to ride through a wood in darkness for a mile to get to where he was going. At the entrance of the wood he was joined by a black dog, it pattered beside him until he emerged from the trees, whereupon it disappeared as quickly as it had arrived.

On his return journey through the wood, the dog joined him again on the dark woodland path, and disappeared mysteriously when he emerged. Apparently, some years later, two prisoners condemned to death confessed that they had decided to rob and murder Johnny that night in the wood, but the presence of the large black dog had stopped them.

Black dogs are also seen as guardians of treasure, especially in Scotland. A black dog was said to guard treasure buried under a standing stone near Murthley in Perthshire, here we have an account of a black dog at an ancient site and as a guardian of treasure.

In summery it seems that the phenomena of phantom dogs is a complex mix of folklore, sightings, and local superstition, which has roots reaching far into the past. There are probably a myriad of different explanations for modern sightings, and a phantom black dog is a powerful archetype, incorporated into modern stories such as the 'Hound of the Baskervilles' by Arthur Conan Doyle. We hope to delve into the mystery further in the future, including some of the many folk tales associated with them.

Large Hound
Location: A684 (Yorkshire) - Between Northallerton and Leeming Bar
Type: Shuck
Date / Time: Summer 2001, between 20:00h - 22:00h
Further Comments: A large black dog ran in front of two women travelling to Leeming Bar by car. The driver closed her eyes and braked hard, expecting to hit the creature. The passenger watched the hound pass through the bonnet, and noticed the creature had no facial features, floppy ears, and was shadow-like. A man that the women spoke to once they reached their destination later killed himself - was the hound a portent?

Red Eyed Dog
Location: Ailsworth (Northamptonshire) - General area
Type: Shuck
Date / Time: Unknown
Further Comments: This huge hound possesses eyes that burn as bright as the sun, making the creature easy to spot if he tries to sneak up on you.

Running Hound
Location: Alfriston (Sussex) - Between the Downs and Town Fields
Type: Shuck
Date / Time: Full Moon (reoccurring)
Further Comments: A large black dog is said to run from the Downs to Town Fields - here it stares over a flint wall before retreating the way it came.

White Dog
Location: Alfriston (Sussex) - The White Way, road leading from the town towards Seaford
Type: Shuck
Date / Time: Unknown
Further Comments: This creature is reportedly the dog of a young man murdered while out walking during the 1700s - because the pitiful hound sat by the victim's shallow grave, the criminals killed it also. The haunting is said to have ceased after the bodies of dog and owner were discovered when the road was widened.

Long Necked Dog
Location: Algarkirk (Lincolnshire) - Area around the village church
Type: Shuck
Date / Time: Twentieth century?
Further Comments: This black dog was described by a witness as being tall and lean, with a long neck and a protruding muzzle. The hound is not regarded here as an ill omen.

Hound
Location: Allington (Wiltshire) - Area between village and All Cannings
Type: Shuck
Date / Time: Early twentieth century
Further Comments: The story of the black dog was used to frighten children in this area. One man may have been chased by the creature (though it was dark and stated it might have been a pony), while another couple who spotted the hound said it stood almost as tall as their pony.

Grey Greyhound
Location: Alphamstone (Essex) - Sycamore Farm
Type: Shuck
Date / Time: One night during the late '40s.
Further Comments: After seeing a creature in his chicken coop, a farmer fired a shotgun at the creature - it ran through the wire netting and escaped. Examining the scene in the morning, the farmer could find no holes in the netting or footprints of the dog.

Black Dog
Location: Alveston (Warwickshire) - Exact location not known
Type: Shuck
Date / Time: Late Nineteenth Century
Further Comments: Charles Walton (the same man who was murdered in Lower Quinton (see Quinton database entry for further information)) claimed to have seen a phantom black dog for several successive nights when he was younger - on the last night, instead of the dog, he saw a ghostly headless woman. He soon heard that his sister had died at roughly the same time as the last sighting.

Shaggy Dog
Location: Ascot (Berkshire) - Old Huntsman's House
Type: Shuck
Date / Time: Unknown
Further Comments: It has been reported that this house is haunted by a sheepdog-looking entity, which has also been heard barking. A man in a red coat was also said once to haunt the site.

Black Dog
Location: Ayr (Ayrshire) - Wooded areas
Type: Shuck
Date / Time: Unknown
Further Comments: Mistakenly blamed for killing a child, it was later discovered that the dog had tried to defend the infant from a wolf (a la Gelert). However, this hound was less forgiving for its former master's murderous action and now runs around the dense woodland.

Monkey-faced Shuck
Location: Balsham (Cambridgeshire) - Wratting Road
Type: Shuck
Date / Time: Unknown
Further Comments: For reasons unknown, the shuck which has been observed in this area is believed to have a bald head and wide eyes, similar to that of a monkey, while the body is that of a large black shaggy dog. It leaps out in front of cars travelling along this road, only to dart out of the way at the last possible second, either on all four legs or standing upright.

Rough Coated Dog with Large Yellow Eyes
Location: Barham (Suffolk) - Along the main Norwich Road, Barham Church Lane, just past Barham Hall gates.
Type: Shuck
Date / Time: 1910s?
Further Comments: The dog harassed a couple of men walking back from work - one of them reported trying to hit the creature with a stick, but the piece of wood passed straight through the dog's body. Another version of the story states the dog disappears into a solid wall.

Shuck Haunt
Location: Barnby (Suffolk) - Bridge over Hundred Stream
Type: Shuck
Date / Time: Unknown
Further Comments: Legend states the stream to be the haunt of a Shuck, though no further information could be found.

White Dog
Location: Beccles (Suffolk) - Cemetery
Type: Shuck
Date / Time: 1974
Further Comments: A woman passing through the cemetery watched a large white dog as it faded away in front of her.

Red Eyed Hound
Location: Beckingham (Nottinghamshire) - Old Trent Road
Type: Shuck
Date / Time: Unknown
Further Comments: This large black dog with glowing eyes is said to have driven a local farmer mad after the man tried to block the creature's path. The farmer was also left almost completely paralysed. The hound is said to walk from the churchyard to nearby marshland before fading from view.

Capelthwaite
Location: Beetham (Cumbria) - General area near the river Bela
Type: Shuck
Date / Time: Unknown
Further Comments: Also known as a Cappel, this spirit is said to be able to transform into any four legged creature, though it prefers the form of a dog. A local vicar is said to have banished it into the river Bela.

Headless Hound
Location: Beetham (Cumbria) - Between village and Milnthrope, and surrounding countryside
Type: Shuck
Date / Time: Unknown
Further Comments: It is said that if this large creature follows you, death is not far behind.

Black Dog
Location: Belchalwell (Dorset) - Unnamed gate in the area (still standing?)
Type: Shuck
Date / Time: Unknown
Further Comments: A particular gate in the area was said to be home to a black dog once the sun went down.