Legendary Humanoids - Basajaun, the Lord of the Forests 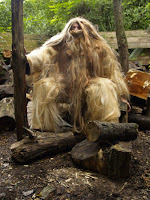 Some mythical creatures have their origin in tradition and tales from the distant past. However, each culture is associated with a multitude of interesting and odd creatures, many of these beings are humanoids. One of these legendary humanoids is the Basajaun.

In Basque mythology, the Basajaunak are a spirit that dwells in caves or in the woods who protects flocks of livestock and teaches skills such as agriculture and ironworking to humans. They are collectively known as the 'Basajaun, the Lords of the Forests.' Fifteenth-century carvings depicting the Basajaunak can be seen in Burgos Cathedral and in the monastery of Santa María la Real in Nájera. The Basajaun also exists in Aragonese mythology in the valleys of Tena, Ansó, and Broto. There are writings about these 'simiots' of Spain's Catalunya and Upper Aragon - creatures that may well find their U.S. counterparts in the Bigfoot or Sasquatch.

These creatures are of various height (though most are very tall), completely covered in hair with a long mane that falls to the knees, and wander the Pyrenees with incredible agility. They were said to be megalith builders and became known as rural genies.

The legend says that long ago, only the Basajauns knew how to plant, harvest and mill wheat to make flour. The Basajauns kept this knowledge to themselves, but one Basque man worked out a plan to steal the secret and give it to the human race. The Basque man made a bet with the Basajauns to see who could jump over the heaps of wheat they had harvested.

Then the Basque man laughed, and he laughed last and best, but quietly, because his trick had worked. Now, the Basajauns are big and slow-witted, but when they saw the Basque man walking away home, with his big, floppy shoes full of grains of their wheat, they realized that they had been tricked. When they stopped laughing, the Basque man began to run for his life, and it's a good thing that he did. He was already a far away when one of the Basajauns threw a hatchet. The lords of the woods may be slow, but they are strong.

The Basque man saw the hatchet coming, and he ducked behind a chestnut tree just in time, because the hatchet struck the tree and split it in half. Now the Basque man had the seeds, but he didn't know when was the right time of the year to sow them. Fortunately, a man was passing by the cave of one of the Basajauns, and he heard him singing:

Another part of the legend states that the Basajaun is the protective spirit of the flocks. It shouts in the mountains when a storm approaches so that the shepherds may withdraw their sheep. By lurking around a pen or its surroundings, it keeps the wolves from approaching. The Basajaun's presence is announced by the sheep who, shaking, and ring the bells around their necks. Thus the shepherds can go to sleep in peace, knowing that during that night or that day the wolves, great enemies of the flocks, will not come to bother them. 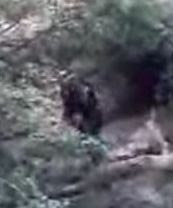 An undated screen capture from a video depicting a supposed Basajaun fleeing a cave in the Catalonia Pyrenees. My guess is that this image was from of a staged video...though I can't confirm that.

Modern day livestock farmers in Valcarlos and Ondorrola are fully convinced of this creature's existence. In testimony from an interview, an elder stated that he would receive visits from the Basajauns at his homestead, but never knew why. They had not visited him for a long time. Another eyewitness account mentions a sighting of a young Basajaun basking in the sun at the opening to the Mailuxe cave, and then added description of this creature as being blond.

In June 1993, a group of cave explorers allegedly encountered a Basajaun-like creature in the ruins of a church in the Catalan Pyrenees of Spain. The 'wild man' was described as standing 5 ft. tall and bulky, covered in shaggy hair and made a sound that resembled an enraged cat. A few months later, two paleontologists were reported to have been jumped by two large, hairy humanoids while conducting research
in the Ripoll forests of Gerona Province, Catalonia region of Spain.