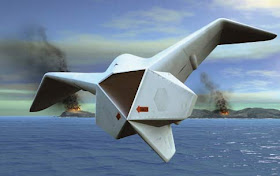 telegraph - The Defense Advanced Research Projects Agency (DARPA), the US military science and technology department, has set about creating an aircraft that can fly low over the water until near its target before disappearing under the sea to avoid detection.

It would then creep closer in submarine form before attacking its target, probably a ship or coastal installation, and fly home.

New Scientist reports that the project, which has been in development since 2008, has reached design proposal stage, and several outside developers have submitted designs. DARPA could start allocating funding to developers in as little as a year.

While the principles of hydrodynamic and aerodynamic flight are similar, the technological challenges are profound. Aircraft need to be as light as possible, so that they can use a minimum of power to get airborne, while submarines need to be dense and strong to withstand water pressure. Heavier-than-air aircraft get their lift from airflow over their wings - submarines simply pump water in and out to change their buoyancy.

One method of getting around the latter problem is to design a submarine that is lighter than water, but - like an upside-down aeroplane - uses lift generated by its wings to force it away from the surface. Then, after surfacing, the wings' "angle of attack" would be changed to generate upwards lift instead, allowing it to fly.

Graham Hawkes, a submarine designer, believes that modern lightweight carbon fibre composites could be used to build a craft that is both strong enough and light enough to fly above and below the water. He has already designed and built a submersible craft called the "Super Falcon" which uses stubby wings to "fly" down to 300 metres. He says that if it were given jet engines and larger wings, it could fly at up to 900kph (560mph) in the air, while still being capable of underwater travel at around 18kph (11mph). At these speeds, the behaviour of water and air over the control surfaces is similar. "Think about it as flying under water," says Mr Hawkes. "It can be done. It just needs a lot of work."

One problem could be overcome in a dramatic fashion - in order to get the wings to start generating downward lift, the craft would have to get underwater; but a lighter-than-water vessel would struggle to do so. Mr Hawkes suggests copying birds: "You might have to put the nose down and literally dive, smack, into the water. It would certainly be spectacular."

There are a variety of other design problems to overcome. Ordinary batteries capable of giving the craft a 44km (28 mile) range - as specified by DARPA - would weigh more than the rest of the vessel, but running it on ordinary fuel would require a supply of air, meaning a snorkel and a maximum depth of just a few meters.

Also, jet engines - which run at several hundred degrees celsius - would most likely explode from the sudden change in temperature if they were rapidly submerged after airborne use, but piston engines would not survive being immersed in water. Jim McKenna, an engineer at the UK Civil Aviation Authority, says: "You can't let cold seawater get at a hot engine because the thermal shock will blow it apart." The Pentagon's dream of a flying submarine is still some way away yet.

NOTE: This project has 'Skunk Works' written all over it. Below is an article from 2006 referencing plans by the U.S. Navy to build the 'Cormorant' system, a flying submarine. There have been other designs from what I can gather but the 'Cormorant' design seems close to what is envisioned. The whole concept sounds like reverse engineering of alien technology, if that's what you choose to believe...Lon

livescience - Lockheed Martin’s Skunk Works, famed for the U-2 and Blackbird spy planes that flew higher than anything else in the world in their day, is trying for a different altitude record: an airplane that starts and ends its mission 150 feet underwater.

The Cormorant, a stealthy, jet-powered, autonomous aircraft that could be outfitted with either short-range weapons or surveillance equipment, is designed to launch out of the Trident missile tubes in some of the U.S. Navy’s gigantic Cold War–era Ohio-class submarines. These formerly nuke-toting subs have become less useful in a military climate evolved to favor surgical strikes over nuclear stalemates, but the Cormorant could use their now-vacant tubes to provide another unmanned option for spying on or destroying targets near the coast.

This is no easy task. The tubes are as long as a semi trailer but about seven feet wide—not exactly airplane-shaped. The Cormorant has to be strong enough to withstand the pressure 150 feet underwater—enough to cave in hatches on a normal aircraft—but light enough to fly. Another challenge: Subs survive by stealth, and an airplane flying back to the boat could give its position away.

The Skunk Works’s answer is a four-ton airplane with gull wings that hinge around its body to fit inside the missile tube. The craft is made of titanium to resist corrosion, and any empty spaces are filled with plastic foam to resist crushing. The rest of the body is pressurized with inert gas. Inflatable seals keep the weapon-bay doors, engine inlet and exhaust covers watertight.

The Cormorant does not shoot out of its tube like a missile. Instead an arm-like docking “saddle” guides the craft out, sending it floating to the surface while the sub slips away. As the drone pops out of the water, the rocket boosters fire and the Cormorant takes off. After completing its mission, the plane flies to the rendezvous coordinates it receives from the sub and lands in the sea. The sub then launches a robotic underwater vehicle to fetch the floating drone.

The Defense Advanced Research Projects Agency (Darpa) is funding tests of some of the Cormorant’s unique systems, including a splashdown model and an underwater-recovery vehicle. The tests should be completed by September, after which Darpa will decide whether it will fund a flying prototype.