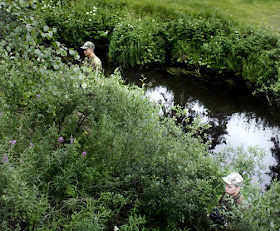 I received the following report from a regular contributor, Igor, in reference to a strange missing person case in the Lapland Region, Finland:

Last Monday, a Thai man working in Salla, Lapland as a berry picker was waiting for a lift back to his apartment. He called his contact and during this conversation he stated "Something weird is following me, it's like a dog or something" after this despite being afraid of the weird creature he hung up and immediately his cell phone was switched off either because he ran out of battery or he turned it off. After this the man disappeared without a trace. Police stated they haven't found any tracks whatsoever from the area he disappeared from, human or animal like. Despite happening this week, police announced today that they are stopping all efforts to find the man except starting an "official investigation"? The man in charge of the operation first made a statement that this is a total mystery but later stated that it is an animal attack and nothing else, almost wanting everyone to lose their attention to the story and called back all the search parties from the area. The parties were mainly made of Finnish military and police personnel and just a few of co-workers were allowed to contribute in the search despite knowing the man and speaking his language. Later they were all called back to work and for the last few days it seems to have been strictly a military/police operation. They found a berry bucket and intact clothes identified as belonging to the man at the scene but the police quickly announced that they had been brought there by the man's co-workers which seems a bit odd...why not just hand them over to officials instead of taking them into the deep forest and just leaving them there? They found no trace of the man, no blood, no tracks, nothing. No one has any clue what could have happened to the man. The particular area has some bears and wolves but bears usually tend to avoid humans instead of following them and wolves hunt in packs. So what was this weird creature he saw and why did he hang up the phone call despite being afraid of this creature? Only specs of this creature so far is "a large, dog like dark animal". There is no information whether it was bipedal or not. The Finland national broadcast network YLE (owned by the Finnish state with a 99.98% share) has removed all stories related to case from their website. Finnish media have been very quiet about this except for tabloids which is rather strange because our country is so small that even small events make it to national news. For example, just a week ago every paper was reporting about a "hippie camp" with "hundreds of naked hippies" in southern part of Finland and they covered it for days.

Here are some articles related to the case (in our moon language X__x), my story above has been translated from these articles and the paper version of two of them (the words "something strange is following me and all descriptions of the creature were exclusively on the paper versions, I guess only because they cannot be erased after printing, like from the YLE site.)

P.S. Now this could be just an animal attack but it's really a strange one if it is. For example, ending the phone call to his Finnish contact person who is from the area and is familiar with the local fauna, the heavy military presence, removing the information from the news and ending the search in just a few days. Also, the description of the creature does not make any sense, or the lack of tracks. Only logical options for a large dark creature on that area are a bear and maybe a moose and as I stated before bears don't attack people often, I personally can't remember any cases. In all the cases involving bears the bear has stumbled upon someone and then left the scene very quickly.

If there are any more information or possible remains or tracks found, I will let you know.

NOTE: I hope to receive follow ups to this case. Many thanks to Igor! Lon