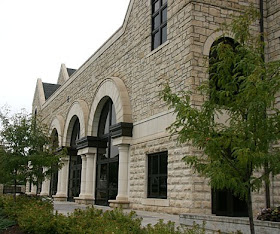 Ask anyone familiar with Nick the ghost, and you’ll hear some story of misfortune or odd occurrence. Many believe he is still at large today.

But with plans to move the Masque, and build a new Welcome Center in its place, what will happen to Nick? Will his soul still linger beneath the stone seats of East Stadium, or will he follow the Purple Masque to its new location?

“His connection isn’t to the theater itself, it’s the connection to that area on campus,” Warden said. “I don’t know if he will stick around and ‘haunt’ the new Welcome Center or not, whether he sticks around or not just depends on him, I guess.”

Warden has been a part of multiple shows in the Purple Masque and said she believes that Nick’s ghost currently haunts the theater.

“There are times in which I have been alone in an area of the Masque and had the sudden feeling that someone was there with me,” Warden said. “That’s usually the feeling I get when a ghost is near me.”

Warden said ghosts haunted the last theater she worked in and she was really excited to hear about Nick when she came to K-State. Upper classmen who worked on set with her told Warden about the legend.

According to University Archives, Nick is the spirit of a football player who was injured during a game in the 1950s. He was carried into the cafeteria of the athletic dormitory where the Purple Masque is located today. After the game was over, a coach came back to check on Nick and found him dead.

Some say that Nick died from the injury while others say Nick died of an intuitive shock he felt when his parents, who were on their way to the game to watch Nick play, died in a car accident. According to the legend, Nick haunts the Masque because he is waiting for his parents to arrive.

While there is no record of a football player named Nick dying on the football field, there may be factual basis to Nick’s story. The legend of Nick could be based on one of two K-State students, John M. Holden or Bob Mayer, who died around the same time as the supposed ghost.

Whether Nick is real or not, the thought has intrigued theater and non-theater students for years, according to Charlotte MacFarland, associate professor in the department of communication studies, theater and dance.

“There were séances galore,” she said. “People would go in and take in candles and meditate and chant and call on Nick and make up stories about him to see if they could create his essence.”

MacFarland said her experience with Nick occurred in the 1970s, during an Ebony Theatre production of “Nobody Like Us.”

MacFarland said she saw an outline of a man appear in the stage doorway while watching rehearsal one rainy evening.

“The only way I can describe it is it looks like a man, it was the outline of a man,” she said. “He stepped right in front of the light and he was just standing there ... a silhouette.”

When MacFarland got up and walked toward the stage, the man disappeared.

MacFarland said she and her stage manager searched the entire building, looking under boxes and checking every corner, but no one was there. The doors were locked.

MacFarland said that it wasn’t until she was walking back to her car alone that she thought it might not have been an actual person standing in the doorway.

“I never bought into that kind of stuff, I just said it was theater people loving drama,” she said. “But on the way back I thought, ‘I think I’d rather it be a ghost than a person.’ I don’t like to think there was some creepy guy.”

The next day, MacFarland told the story to her Fundamentals of Acting students, a class held in the Purple Masque.

“I said, ‘Nick, you really scared me last night. It doesn’t matter because the truth is: I still don’t believe in you.’ And the work light just over my head burst. It exploded,” MacFarland said.

After that event, MacFarland wouldn’t go into the theater alone. She said if she was early for class, she would wait for a student to come along before she went in.

“I just always felt like there was something there, I really did. A lot of it was just left over from my experience, but I really did feel like something was going on,” she said.

That feeling no longer lingers for MacFarland.

“There was a point where I’d go in and I thought, ‘Nah, it’s just a theater,’ which I feel right now,” she said. “It doesn’t make me nervous at all.”

Like Warden, MacFarland does not think that Nick will move with the Masque.

“Whatever that entity is has a special feel for that particular place, so I’m not sure that these things will happen,” MacFarland said. “I think that either they would not happen at all or suddenly people wouldn’t feel comfortable in the welcome center. Maybe chairs will move and faces will appear in the welcome center, which might not be such a good idea.” 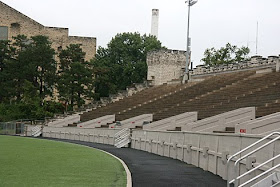 Several ghostly manifestation have reported during the time that the Purple Masque Theater was located in the East Stadium.

The mischievous spirit of the deceased football player, known as Nick got his chuckles at the expense of the living. The ex-football player died in the building in the 1950's, when it was still used as an athletic center. He was injured one day during a practice and brought into the building, where he died soon after. His playful spirit has been here ever since, stomping up and down hallways, on staircases and on the theater stage. He also moves chairs and hides theater props at night but he is most famous for the levitation's! Wooden boxes that have been stacked in the dressing room have jumped to the floor and then re-stacked themselves... before the startled eyes of several witnesses. There is also a report of a fire extinguisher that was seen spinning around in mid-air, spraying white foam as it traveled. Nick's voice has also been caught on tape.

Recently, a female witness and her boyfriend while standing in the hall behind the East Stadium seating heard the sound of someone walking in football cleats behind them. When they turned around, they both saw the back of Nick's apparition, dressed in 1950's football gear walking down the hall towards the main floor of what was the activity center in the 1950's.

An apparition of a man dressed in a Confederate Civil War uniform, has long been seen, sitting in his own phantom chair in the theater and stage area.

Unless Nick was released from this world by a parapsychologist, he is still haunting the East Stadium, not willing to accept his death which wasn't supposed to happen, cutting short his plans for his life. He may follow the thespians over to the main theater, but he has been seen recently at the East Stadium by two eye witnesses.

The entity of the Confederate soldier seems to be haunting the land, and will probably be seen again as he doesn't care what department is using this space, which was probably originally the site of his home.