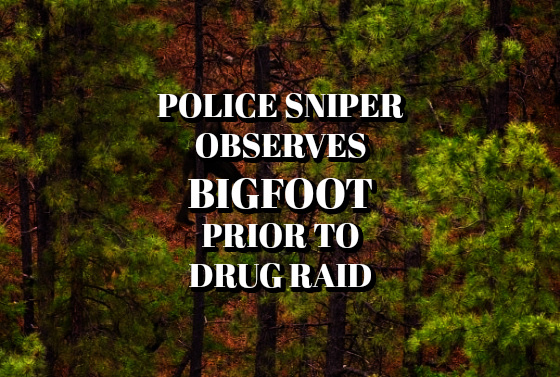 I received a telephone call from a retired police officer who wishes to remain anonymous. I am not going to name the town or county, but I will state that the area is in southwest Ohio.

The incident occurred in early September 2003 during a drug raid in an area near a state forest. The police officer was also the department's designated sniper. It was approximately 5 am and there was surveillance on the residence an hour before the time of the raid. The suspect was known to use booby traps, so there was a lot of caution. The witness told me that he was stationed about 25 yards from the back door of the house.

He had been there for awhile when he started to hear heavy breathing and snorting coming from an area behind the house. His first reaction was that the suspect was out in the yard, so he looked through his scope and noticed a huge hairy being digging through something. As he continued to observe, the being stood and looked in his direction. It began to snort heavily and raised its right arm pointing in his direction. The witness noticed long hair hanging off the arm. He could sense that this thing knew he was there watching it. The witness stayed quiet, but did attach a suppressor on the muzzle of the rifle in case he needed to use it.

It was beginning to lighten up some, so the witness was able to see more detail. He stated that this being was 7+ foot in height and had dark long hair all over it body. The face had very sparse hair and the skin was almost black in color. The nose was large and flat. He also noticed that the fingernails were also black. It continued to make heavy snorting sounds and looked back at the witness occasionally. By this time, the witness affirmed that this was probably a Bigfoot.

He told me that he thought about shooting the Bigfoot, but was afraid it was cause a ruckus and compromise the raid. After approximately 10 minutes of observation, the Bigfoot moved away from the area. But before it left, it literally broke a 3 1/2" thick limb off a nearby tree. The witness assumed that this was in reaction to him observing the beast. At this point, the witness was concerned that it would circle back and attack him. Fortunately, the raid began a few minutes after the Bigfoot left the location. The witness later told me that the Bigfoot had been digging through a pile of garbage. That's when he also examined the tree limb.

He never mentioned this incident to anyone other than his wife. He did state that the area is well-known for suspected Bigfoot activity and that his department occasionally received a sighting report. The witness laments to this day that he didn't take a shot at the beast, but did acknowledge that the arrest of the drug suspect was high priority.

I have every reason to believe the witness. Lon

Cryptozoology A To Z: The Encyclopedia of Loch Monsters, Sasquatch, Chupacabras, and Other Authentic Mysteries of Nature