'Time Travelers' From the Past? 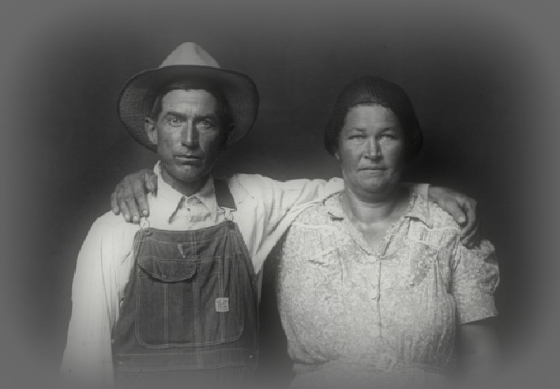 “The following account is of a strange experience that occurred to my mother at the age of 5, along with her family in the winter of 1957. The incident was the picking up of hitchhikers that may or may not be human. The incident bears some similarities with accounts of phantom hitchhikers, but goes much further to suggest that they were real flesh and bone beings.

My mother and her family, which consisted of her parents and older sister, lived between the cities of Reidsville and Greensboro in North Carolina. One day they had an errand in Reidsville and on their way there they saw an older couple walking on the opposite side of the road. A couple of hours later, leaving Reidsville on their way home, they saw the same couple in the same spot heading in the same direction as before; almost as if they had been walking on a treadmill having gained no ground at all. They pulled up and asked if they needed a lift and they said they were trying to get to Greensboro to the bus station. My grandfather agreed to take them there but first they would have to go home to be there in time to pick up their oldest daughter from the school bus near their house.

Once inside the car it became painfully obvious that they were poorly dressed for the cold icy weather. The woman was wearing a summer dress and sandals and the man a shirt and bib overalls and shoes along with a brimmed hat. My mother being a small child sat between her parents in the front seat but turned around facing the couple staring at the strangers as children do, taking in their appearance. The one thing that stood out in her mind was the man's piercing beautiful blue eyes. The man reached into his pocket and handed her a red pencil with coca cola written on it. When they reached home it was decided that they would have lunch with the couple, who said they were the Bradleys, before the drive to Greensboro. Considering their clothing my grandmother decided to give them more appropriate winter clothing and coats and shoes for the woman who only had sandals. Grandmother also decided to pack them snacks and sandwiches for their trip.

With their guests well-feed and with warmer clothing and snacks, everyone piled into the car to take them to Greensboro. Half way on their trip the Bradleys insisted that they needed to be let off on a bridge on old US Highway 29. Grandfather protested saying no they would likely not get another ride and being winter it would be getting dark soon and insisted on carrying them all the way. But they said, 'No!' They must be left off on the bridge. A sort of back and forth occurred between my grandfather and the Bradleys with them asking to please be let off on the bridge. Unable to change their mind he obliged and stopped the car. They opened the door and got out and immediately disappeared, leaving the door still open. My Grandfather was horrified, jumping out of the car, looking to see if they had fell down on the ice out of his view. But they were nowhere to be found. He looked all about and called for them but nothing but silence. The whole area was clear as far as he could see but still nothing. He got back in the car with his family, severely upset and confused as to what just happened as was everybody else. Frantically they drove up and down the road looking for them wondering if they had somehow got another ride, trying to rationalize the obviously spectacular disappearance of the Bradleys. After a fruitless search they drove back home confused as to what had occurred.

This made a huge impression on my mother, having distinctly remembered the incident all her life. So the question remains - who were the Bradleys? Were they ghosts? But ghosts don't stay all afternoon with you and eat lunch. Furthermore when they disappeared the clothes given to them disappeared as well. Even the sandwiches that were packed for them. This suggests that they were solid beings. Also why did they insist on being let off on the bridge, saying it must be done? Was it some sort of portal or gateway home. The whole thing remains a mystery.” - j boogie 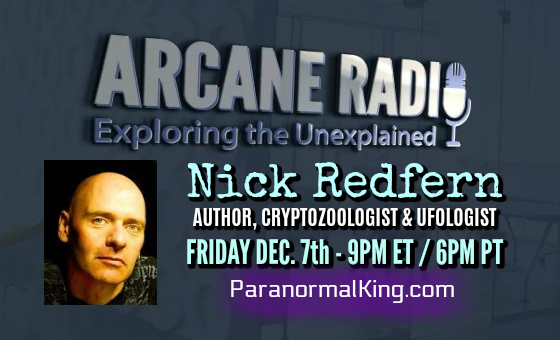 Facebook event announcement: Nick Redfern - Author, Cryptozoologist and Ufologist - Arcane Radio
Join me as I welcome author, cryptozoologist & ufologist Nick Redfern to Arcane Radio. Nick is a full-time author and journalist specializing in a wide range of unsolved mysteries, including Bigfoot, the Loch Ness Monster, UFO sightings, government conspiracies, alien abductions and paranormal phenomena. Nick works on the lecture circuit, both in the UK and overseas, and has appeared in internationally syndicated shows discussing the UFO phenomenon. His most recent title is 'Top Secret Alien Abduction Files: What the Government Doesn't Want You to Know.' This should be a very informative and entertaining show! Join us this Friday, December 7th at 9PM ET / 6PM PT on ParanormalKing.com - Meet us in the chat room...just click the banner or go to www.paranormal.olicentral.com
Listen to our podcast at Arcane Radio on Podbean. You can also listen to the podcast at Arcane Radio on Stitcher - iOS, Android and the Webplayer. Please consider becoming an Arcane Radio patron. Thanks...Lon
**********

When a Fictional Monster Came To Life…Well, Almost…

Scientists Unravel the Mystery of the Siberian Unicorn

Khon Paa: The Most Unlikely Unknown Animal Of All?


UFOs over Florida: Humanoid and other Strange Encounters in the Sunshine State

The Last Skinwalker: The Avenging Witch Of The Navajo Nation

Answers from Heaven: Incredible True Stories of Heavenly Encounters and the Afterlife

Hollywood vs. The Aliens: The Motion Picture Industry's Participation in UFO Disinformation

The Gods Never Left Us