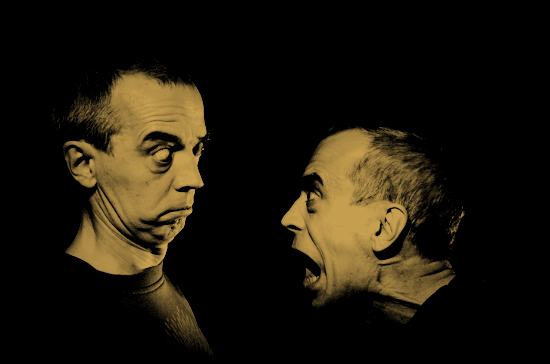 “I never physically met my own döppelganger but it seems other people have. In the 1980s, I had several people asking me if I had been living in Dunedin. That's one of New Zealand's major cities, in the south of South Island, on the east coast. I was living in Westland, on the west coast of South Island, a good seven hour drive from Dunedin. At that point, I hadn't been to Dunedin since I was an infant so no, definitely not living there. More than one person had said to me about me being there. That I was involved in the theatre, and if it wasn't me, then this young woman had the exact same hair cut and colour (long, auburn hair) and green eyes and the same first name. A name that is not that common in New Zealand. When I moved to Christchurch, on the east coast, I had one more person ask me if I'd moved north. I asked them what they meant, and they said that they'd seen me in a café in Dunedin and I said 'hi' to them but rushed off. And that was that. I never heard another thing about it. This was over thirty years ago. So weird. I shouldn't be surprised, I've had some pretty weird experiences that I can't always put down to the mushrooms or the weed. As I have become more familiar with the simulation hypotheses, the more I'm thinking it explains a lot of this weird shit such as the shadow person and hat man and several other crazy stuff I and others have experienced and may well be a reasonable explanation for people experiencing the döppelganger effect. Only problem is, at this point it is using one mystery to explain another. (sigh).”

“This happened to me about twenty five years ago. I was going through a bad time, no money for a car or any luxuries yet people claimed to have seen me in an expensive sports car at the best restaurants in town, wearing Italian suits. A number of people over a few weeks were convinced they had seen the rich me. It suddenly stopped, and has never happened since.”

“About 30 yrs. ago, me and my wife were sitting at a crowded local restaurant. We were waiting for our order when, low and behold, I saw MYSELF walk into the restaurant and sit down at a table about 15-20 from where we were sitting. I immediately pointed "him" out to my wife and we both proceeded to freak! He never saw us (it was too crowded) and he even had on my same style of clothes...not the same clothes, just the same style, including hat! Then he spoke and that's when our jaws dropped - he even had my same voice! We were just too freaked out to walk up to him and start a conversation, but he was by himself and I was afraid that if we both approached him, he might freak as well and we would end up causing a scene. However, as I understand it, doppelgangers are also associated with evil or bad luck. We never got that feeling from him at all and he wasn't just a guy who resembled me...he WAS me. I saw him one other time within a year or so of the first encounter. He was on a bicycle peddling down the road only a few streets nearby where we lived. My wife and I were in the car headed the opposite direction and we freaked out again. Haven't seen him since. It's good to see these other stories of people seeing themselves, as I thought I was the only one to do so. Doesn't make me feel so weird about it now. Can't help but wonder what it all means though???”

Couple Vanishes in the Bermuda Triangle

A Texas couple who took their private plane to go on a trip of a lifetime in the Bahamas — where they also planned to elope — have now been missing for over two weeks.

On Sept. 26, Forrest Sanco and Donna Grant of Fort Worth, Texas, took off from Fort Pierce, Florida, and landed in Freeport, Bahamas, but they never made it to their final destination in Rum Cay, where they had rented a house and planned to tie the knot.

The couple, both 56, who went to high school together, reconnected a year ago on Facebook and instantly knew they were meant to be.

“They had a whirlwind romance,” Sanco’s neice, Lee-Ann Burger, 23, tells PEOPLE. “He told us that he knew she was the one after their first date.”

“In true Sanco fashion,” says Burger, he bought a Cessna 150, reinstated his pilot’s license and planned the trip. Because the trip was going to be a romantic adventure for the couple, their families didn’t expect to hear from them often, which is why they didn’t expect anything was wrong until a week had gone by and they hadn’t heard from them. Read more at Texas Couple Goes Missing After Flying to the Bahamas to Elope: ‘We’re Trying to Remain Hopeful,’ Says Family

The house-sized asteroid that just passed by Earth, almost as close as many satellites in orbit, will be back -- and a future visit might lead to it taking up permanent residency here.

On Tuesday night/Wednesday morning, Asteroid 2012 TC4 safely passed by our planet at an altitude of 27,300 miles (44,000 kilometers), just a few thousand miles above the level of satellites in geosychronous orbit. That's nearly twice as close as when it passed us almost exactly five years ago, about a week after it was first discovered in October 2012.

The most recent models of the space rock's future path, which can be altered by Earth's gravity each time it makes a close pass, have ruled out the possibility that it will impact Earth when it makes another close call in 2050.

But the same can't be said for its visit in 2079. - Asteroid that just buzzed Earth may not miss on return visit

Shadow People On The Loose

Documentary on alien implants convinces filmmaker topic not so crazy

The Grim Crime-Scene Dollhouses Made by the ‘Mother of Forensics’

The Road to Strange: Travel Tales of the Paranormal and Beyond