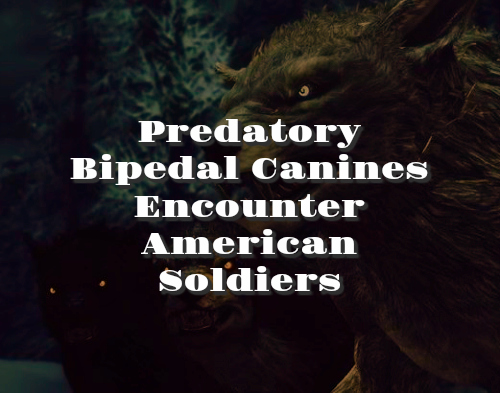 The following account describes an encounter with a pack of upright canines in war-torn Europe:

It was June 1944, a few days after D-Day and somewhere in western France, a group of soldiers were ordered to watch a hill. They were in a jeep equipped with a mounted .50 caliber rifle. As they arrived on the scene, they found three dead German soldiers, who had been torn to shreds. Body parts were everywhere. According to the witness, it almost looked as if a bomb had gone off in the area. The men got out and looked at the bodies. It was around dusk. As they inspected the area, the men heard five long howls. They then saw movement on the hill and quickly retreated back to the jeep. They then watched as five bipedal canine-like creatures walked over the hill and made their way down to the dead soldiers. They proceeded to devour them, chewing through bone as if it was nothing. Somehow, the creatures never took notice of the Americans in the jeep. That is until one of the men attempted to load his gun, which resulted in the creatures looking in their direction.

They began making their way towards them. The men in the jeep proceeded to open fire on the creatures who were ripped apart under the barrage of bullets. The witness estimated that over 1000 rounds were fired at them. It was now nightfall. Thinking that the situation was under control, the men proceeded to the top of the hill where they remained talking until morning. When they went back to the area the next morning to inspect the creatures in a daylight setting, they were astonished to find there was nothing there – no creatures and no dead soldiers. The only thing they found were numerous large dog-like tracks...as if a cleanup crew had come and scrubbed the area. The men assumed that there were more of these creatures roaming in the area. They felt they were in danger and they quickly left. This story was told by a grandfather to a family just prior to his death.

NOTE: There were tales of werewolf encounters during WWII and subsequent years when US troops were stationed in Germany. The 'Morbach Werewolf' is just one example. I have heard stories of actual Nazi-trained shapeshifting commandos that resembled large upright canines, which were used during the invasion of the Soviet Union and the Caucasus (I'm not referring to the SS Operation Werwolf that involved a guerilla troop of volunteer, Nazi forces brought together to operate secretly behind Allied enemy lines). This seems somewhat far-fetched...but if I have learned just one thing over my many years of investigating the paranormal, it's to not totally discount any bizarre report. Lon