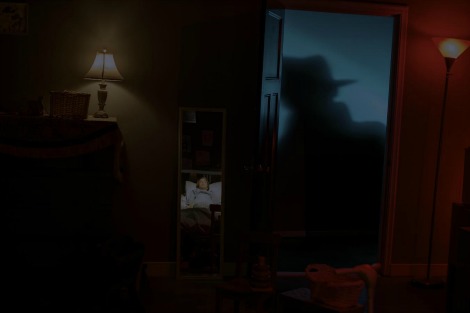 The 'Hat Man' Coming Up The Stairs

Youtuber Big Dee described the time he and his mother had a strange encounter in his Detroit home in 1966:

“I wanna tell about when I first saw the shadow man. It was in the summer of 1966. I was sleeping in my parent's bedroom, I think because my dad was painting my bedroom. And I was sleeping on an old roll-away bed. And from where the roll-away bed was situated, you could look out into the hallway and down the stairs. And I saw the shadow man. At least I think I did. I was having trouble falling asleep as I always do as I suffer from insomnia. So I'm laying there looking out into the hallway and down the stairs I see what looks like this hat forming above the stairs, because I was obviously below them. But I see this head coming up with a hat on, like a fedora hat. And it's slow, real slow coming up the stairs. I'm just looking at it thinking it was a trick of the light but there was enough light that shown into the hallways because my mother always had the night light that was on in the bathroom so that we could get to the bathroom, you know, whatever.

Anyway, I'm watching this thing and I'm not really sure what it is at the time. It's gliding up the stairs. It's no walking up the stairs. It's just kind of gliding up the stairs. And it looked, you know, I could see the head, and then the shoulders and then the torso appear, and then that's when I started to cry. Not hysterically or anything like that but I stared to weep and it seemed like I was weeping or a long long time before my mom woke up or whatever. But anyway while I was crying, I see this thing come up the stairs, all the way up the stairs now. It's on the floor, not the stairs, now. Its about, I don't know, 15 feet away from where I am and it's about that time my mom evidently heard me and picked me up and put me in her bed. Now I know she saw it because she woke up my dad and together they searched the house.

We lived in a nicer part of Detroit but anyway there were still problems. They were kinda looking for someone who may have broke in. That's why I say my mom saw it too. They searched the house and never found anything, All the windows and doors were locked just as we had left them then night before.” 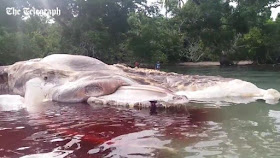 A giant carcass found washed up on a beach in Indonesia’s central Maluku province puzzled locals and authorities trying to identify the massive creature.

The massive carcass was found on Hulung Beach on Serum Island on Tuesday night by a local man, the Jakarta Globe reported.

Asrul Tuanakota, 37, said that he initially mistook the huge fleshy blob for a stranded boat, the newspaper reported.

Locals first shared images of the carcass, measuring about 15 metres (50ft) in length, on Wednesday. The animal is believed to have been dead for at least three days before being discovered.

According to local reports, fishermen thought it to be a giant squid, but a coordinator of Indonesia’s Marine and Coastal Resources Management said it was likely to be a whale. Lab tests are underway to confirm the species. 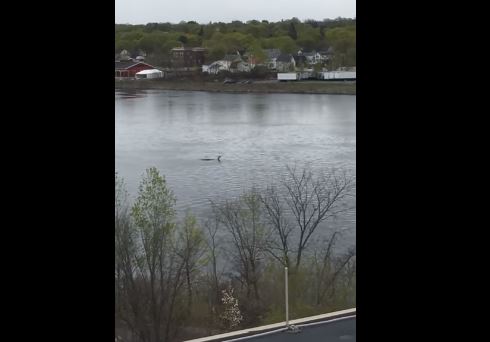 Alain Ducas was on a rooftop over looking the Penobscot river yesterday when he noticed something strange swimming by. He grabbed his phone and was able to record what looks like a sea serpent! Check out the video 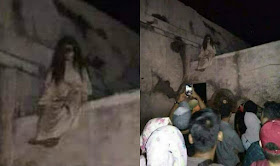 Chudail or witches or Banshee are commonly heard horrifying figures known to us all. But what happens when the chudail or the female spirit is captured on camera for real? Well, do not be a bundle of nerves as a photo of ‘chudail’ from Hyderabad in Pakistan has gone viral on the internet. It shows a scary female ghost in white, scaring the social media buffs from India and Pakistan. The scare-fest began with Faakhir Mehmood, a famous Pakistani singer posting a picture of ‘churail’ on Facebook. It started a huge discussion, with some rubbishing the authenticity of the original photo while some seemed scared by the picture of the ghostly avatar.

Anything and everything related to supernatural elements get us hooked to the news. It becomes even more dramatic when the term ‘real’ picture or incident is attached to the story. Hence, when a photo of horrifying ‘chudail from Hyderabad’ was posted by Faakhir, it was bound to catch the attention of majority. The pic shows an alien figure, definitely not human sitting at a height probably on the walls with the crowd clicking pictures in the middle of the night of the rare existence.

Faakhir captioned the viral picture of chudail as: “Can someone verify? The supposed picture of CHURAIL captured by many people in the middle of the night in Hyderabad.” This post definitely at first will make your skin crawl, till you decide to activate the logical side of your brain. There are too many accounts of individuals claiming to have had an encounter with mystical elements, popularly called as ghosts of dead people. While many brushes aside such claims as a fragment of the imagination but some individuals stand by their stories.

As for the amount of scare of this chudail photo drew on the social media, we don’t think so. The comments section was full of hilarious potshots taken at the supernatural being. The comments featured the cliché ‘woman with no make-up’ to the chudail being a first in history who is enjoying the amount of attention and in fact giving the perfect pose for best pictures. While the authenticity of this viral picture is yet to be substantiated, the chudail has brought together the Indian and Pakistani netizens – joined in fear and laughter. - Chudail from Hyderabad goes viral! See pic of the freaky Ghost in White scare India-Pakistan social media buffs

Shoe With Severed Foot Inside Appears on Dock in South Carolina

Cops Pull Over “Clown Car” Van With 40 People Crammed Inside


The Extra-Dimensionals: True Tales and Concepts of Alien Visitors

The Roswell UFO Conspiracy: Exposing A Shocking And Sinister Secret

This newsletter is licensed under a Creative Commons Attribution-Noncommercial-No Derivative Works 3.0 United States License.
Hotlinking of PM Media images and copyrighted material is strictly forbidden unless permission is obtained.
'Phantoms and Monsters' and 'phantomsandmonsters.com' is protected under the Lanham (Trademark) Act (Title 15, Chapter 22 of the United States Code)
'Phantoms and Monsters' was establish in September 2005 as part of PM Media
Copyright 2005-2017 Phantoms and Monsters / PM Media - All Rights Reserved
Lon Strickler at 2:17 PM
Share
‹
›
Home
View web version