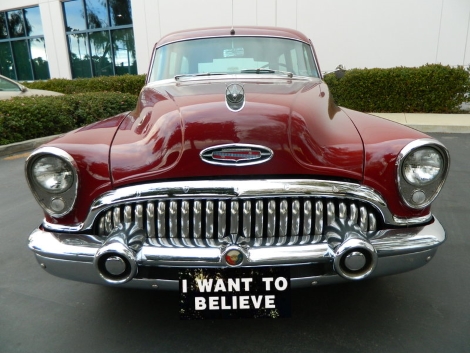 Aliens in a Red Buick

The year was 1970. I worked for Caltrans as a Right of Way Agent for the State of California. I was taking some legal documents over to Bakersfield to have a County Judge sign. I was traveling on Route 58 west of Mojave towards Bakersfield and East of Tehachopi in my 1957 Chevrolet State car. A State highway maintenance crew was repairing the westbound lanes. Traffic was stopped in these two lanes for up to 15 minutes. I pulled right, off of the highway to a dirt and gravel turnout and backed up to a low level brush and rock area with no dirt roads behind me.

I sat in the car for a few minutes and decided to take a look at the documents I was taking to Bakersfield for the Judge. Before I got the documents out, I noticed something in my rear views mirror and turned to see what it was.

I was amazed to see a vehicle directly behind my car with two individuals wearing gray-white suits. Mine was the only car on the turnout. No car could have possibly gone around the front or the back without me seeing or hearing it. There was no sound at all.

I continued to look directly at the car and individuals directly through the back window. The car was maroon in color with a dark top; the grill looked similar to an older Buick. The license plate was light in color with no discernible markings.

The two individuals in the car as stated wore jump type suits with no buttons. They were slender with no visible hat or hair and their bodies appeared to be smaller than the average sized man. Their eyes were very dark and semi oval; little larger than a normal human. They stared at me and never blinked. They both had two small holes for their nose, very small mouths, no lips and I couldn't see any ears. Nor could I see their arms due to their car hood hiding over half of their bodies.

After a few minutes of staring at each other, I noticed light traffic starting to slowly move on the highway again to the West. So I drove from my parking area out to the paved highway going towards Bakersfield again.

The highways west bound lanes were now open for the public. I was driving about normal speed in the right hand lane, just west of where the State construction was. Looking to my left I saw a maroon car driving at my speed, parallel to me with the same individuals I had seen at the turnout. The driver looked continuously to the front. I immediately noticed that he had no nose and he was bald. The passenger in the car was again staring directly at me. We drove parallel to each other for about 15 seconds.

I didn't know what to do, so I waved my hand at them as if to say goodbye. They immediately sped down the highway and disappeared around a moderate curve to the right. I sped up to try and see the maroon car again but it had disappeared. There were rather steep rock cliffs on the right side and no place to turn off the highway.

The next day driving from Bakersfield to Bishop, I stopped at the same turnout of my first encounter and went to the same spot. I saw my tire tracks from the previous day but saw no other tracks behind mine. Wow!!

As you might deduce I've never breathed a word of these happenings for decades to anyone for fear of being ridiculed. I've mulled over this experience many times over the years.

This is my true story of a very strange, mysterious and profound event. - MUFON CMS

Northern Ireland - April 4, 1998 - 3:30 AM: The witness had gone to bed and his next recollection was of “them” bringing him back. He remembers going to the kitchen to get a cup of water feeling very sleepy and unsure of what was around him. He then walked to the living room to sleep there. He attempted to turn on the light switch but it would not work. He looked up at the light and then down and realized that he was surrounded by several short humanoid figures. He shouted for help and ran for the door but ran straight into the wall falling to the floor. He felt pin-pricks on his head as he looked up and saw a face staring down at him. He was terrified as he saw large black eyes looking down at him. The witness kept shouting for help but apparently no one could hear him. He heard the alien talk to another one, but could not understand the language. He described the intruders as about 5 ft tall with very long three fingered arms. Their skin was gray/brown in color. After that he woke still shouting for help. It was already 6:00 AM but he did not wake up on the floor, he was on the sofa now. He could not remember being taken only being brought back. - Witness statement

LYNN, AR (KAIT) - An 8-year-old boy died in Lynn Saturday while attending a birthday party at a church.

According to Andrew Turner, a detective with the Lawrence County Sheriff's Office, the boy was playing in a cemetery behind a church when a large tombstone fell on him.

The boy was taken to the Lawrence Memorial Hospital where he was pronounced dead.

Members of the church say the accident shocked the community.

"Just an eight-year-old rambunctious young man, just like many eight-year-old young men and full of life," said Jeff Neely, the church's pastor. "There is definitely a lot of prayer being sent up on behalf of their family."

Church members are planning to help the family financially in some way.

Turner said he does not believe foul play is involved.

The child's name has not been released.

Ann S. was heading towards Klamath Falls, Oregon when she suddenly heard a thump and thought it may have been a flat tire. Ann grabbed a flashlight and checked the tires, which were OK, and then got back into the car. She said there was a funny smell, and she looked out the window, seeing something moving towards her. Thinking it to be a person with bad intentions she locked the doors and prepared to start the engine...whatever it was kept coming. She shined her flashlight out the window, and saw what she described as a "weirdo" creature. It had large red eyes that reflected the light when the flashlight hit them. The creature then covered its eyes with its arms crossed, and screeched. It appeared to rub its eyes as if to get its sight back. She noted that the creature was about 4 ft tall, green, scaly, and had claws on its four fingered hands. She honked the horn, which caused the creature to run away, she then noticed that it had several long green "spines" which hung off its back. - The Western Bigfoot Society 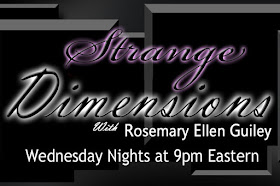 The Real Story Behind the Myth of Area 51

Argentina: An Interview with Ventura Maceiras in 1971?

An Entire Irish Village Vanished And No One Knows Why


Destiny of Souls: New Case Studies of Life Between Lives

Leonard: My Fifty-Year Friendship with a Remarkable Man