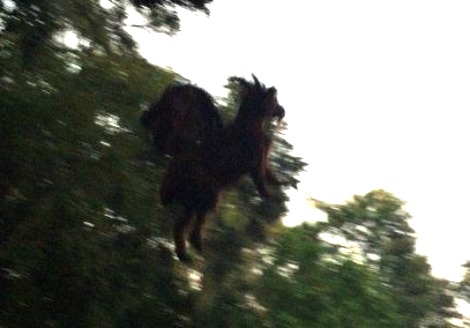 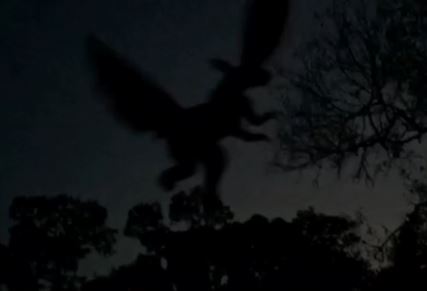 For more than 200 years, people living in or passing through New Jersey's Pinelands have reported seeing a strange, winged creature that has come to be known as the Jersey Devil.

There are tons of stories about the monster, and thousands of witnesses who claim they have encountered it.

Late Tuesday night, I received an email from a reader who recently became one of those witnesses.

Dave Black of Little Egg Harbor Township was driving home from his security guard job in Atlantic City when he saw what he thought was a llama running in and out of the trees lining the road.

"I was just driving past the golf course in Galloway on Route 9 and had to shake my head a few times when I thought I saw a llama," he wrote in his email.

What happened next is the bizarre part.

"If that wasn't enough, then it spread out leathery wings and flew off over the golf course."

Is this the Jersey Devil?

Black said he grabbed his cell phone and snapped off a few photos, but only one came out.

The creature quickly disappeared, he said, and left Black wondering.

After his encounter, Black said he stared at the photo for an hour trying to come up with an explanation for the image he had captured, before deciding to share it with NJ.com and its readers.

"Thought I'd send it in for you to share," he wrote. "I'm not looking for anything in return, just thought someone else could maybe explain this in a more rational way."

Before I could write about his experience and print the photo, I had to be sure he was sincere.

"Yes, I swear it's not Photoshopped or a staged thing," Black responded when I asked if he was willing to let me use his name and state that the photo he sent was not manipulated in any way. "People have said it's fake, but it's not. I'm honestly just looking for an explanation for what I saw."

Being a paranormal investigator, I'm very skeptical and need proof before I believe in anything that could be considered paranormal.

The photo, if it truly has not been messed with or wasn't set up, is quite...interesting.

MORE: My uncle, the Jersey Devil: Man's quest to set the record straight
You can clearly see wings on the creatures back and horns on its head. Its feet are cloven and the fur is dark brown.

And it's obviously off the ground.

I don't see any wires or string holding it up like a piñata.

However, what is it?

"The mind plays tricks on you," Black admitted. "A friend suggested that maybe it was an animal running and an owl grabbed it, the photo being a combination of them. That's still not my first instinct, but I don't know how to explain it otherwise."

His final statement on the incident was simply, "I think I saw a large, flying mammal about the size of a deer."

Have you ever seen the Jersey Devil?

Do you believe in the legend?

Strange People at the Border

Chris from Texas called in to tell of a bizarre encounter he had. 1988 – Rio Grande Valley

“Twenty-five years ago I was a brand new border patrol agent. We had more trainees than journeymen so they would stick two trainees together and say go do your job. The usual shift, there might be four people working. So we had two guys upriver and my partner and myself down river. Very little experience between the two of us. We had just gotten from the academy but neither of us had a happy year in there. So they send us down and tell us, go fight crime, midnights. So we're driving down the river looking for anything we could see that didn't look right. Not really knowing what we were doing but trying to get on the job experience. We see this bonfire out on the hill that we used to refer to as 'the party house'. It was... at the time it was out of town quite a ways. Now it's almost in town. We drove toward it thinking that maybe somebody's down there, maybe some aliens or maybe some smuggling. And at the time we had switches we could throw that could turn all the lights off in the vehicle. So if you hit the brakes and the back up light, nothing would come on. It wouldn't show where the vehicle was. So we turned off all the lights and we're driving down this long dirt road towards the river. As we come around the corner, there's about fifteen or twenty people standing in a huge circle around a giant bonfire. They are all wearing brown, full-length robes. They got their hands up in the air like they are doing some kind of religious ceremony. I saw a movie called Race With The Devil with Peter Fonda and Warren Oates several years before this and that movie came to mind. I looked at these people just in time to see two of these people turn toward us and come running at us not in aggressive manner but like we didn't have any business in there at this little ritual. It was about 2 o'clock in the morning. I looked at my partner, he looked at me, I threw it into reverse and hit the gas. I said, 'I don't see any immigration violations happening here.' I went backwards with no lights, I made a 90 degree turn and I didn't slow down until I hit the highway. Once we hit the highway, we're trying to decide what to do because our nearest backup is a good 20 to 30 minutes away. There's one sheriff's deputy and he's way the heck out of town. Who would you report this to? They didn't teach us this at the academy. We discussed it the rest of the night. Who should we report this to and we could not come to a conclusion so at 8 o'clock in the morning we decided that we were not gonna tell anybody and we were going to pretend like it never happened. We managed to keep our mouth shut for a good 20 years.”

Apparently the man was going to tell his story on Coast to Coast radio in 2010 but due to a shift change, his story got cancelled. He decided to tell the story to his class instead.

“So a couple of weeks go by and I'm teaching a class. I mention to the class that I almost made it on the radio and I told them this story about what had happened to me and my partner and it would have been neat to tell my story to the entire United States and other parts of the planet and one of the students said, “Hey, you know about a couple of years ago I was driving down by the river and came across the exact same situation. So apparently whoever these people are they are still out there and they are still doing their little rituals and I have no idea who they are or what they are doing.” 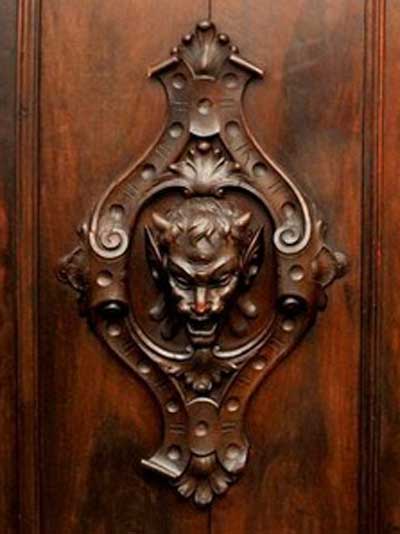 Staff at an antique shop in Paignton, Devon, have been spooked by a series of ghostly occurrences, believed to have been caused by a haunted wardrobe. The ornate piece of furniture, which features a Satanic head carving, has had such a chilling affect the store owners are now desperate to get rid of it. Ever since the Olden Ewe antique shop bought the haunted item for £350 earlier this year they claim odd things have been happening there on a daily basis.

There have been reports of customers being unable to shut the wardrobe by someone pushing it from the inside and there have also been reports of it unlocking and opening by itself. Other customers have complained the shop is significantly colder near the wardrobe, while some also sense the presence of a ghostly child nearby. Owner Linda Bell, 54, says things have got so bad she now cannot wait to find a buyer for it.

She said the haunting reports only started when they bought the early 20th century item that features a large imposing carved head on the door. She said: "We just want to get rid of it now. Some strange things have been going on in the shop since we got this piece of furniture. Two regular customers have been to view the cupboard, and both have said that they sensed the presence of a little girl. We got the cupboard from an ordinary home, and we had no odd goings on before we had the cupboard in our shop. Customers who didn't know anything about the cupboard have complained that the end of the shop where it is is very cold. - Antique shop staff get spooked by a series of ghostly occurrences from haunted wardrobe

In the world of giant vegetable growing it doesn't get much more impressive than this - a pumpkin weighing in at 1,969 pounds and earner of the top prize at the annual event near San Francisco.

The man responsible for growing the vegetable was Steve Daletas of Pleasant Hill, Oregon. Despite it's size however the pumpkin doesn't quite exceed the current world record of 2,323 pounds which was set in Germany last year by Beni Meier from Switzerland. 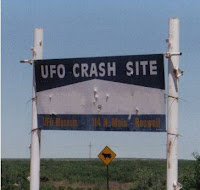 The Roswell UFO: Hiatus Or Change?

Could This Costume Prove The Patterson Gimlin Film Was A Fake?

Facebook bans everyday phrase - and no one knows why

Death Line: Danger Down Below!

The Templars: The History and the Myth: From Solomon's Temple to the Freemasons

Cults, Conspiracies, and Secret Societies: The Straight Scoop on Freemasons, The Illuminati, Skull and Bones, Black Helicopters, The New World Order, and many, many more

Going Clear: Scientology, Hollywood, and the Prison of Belief