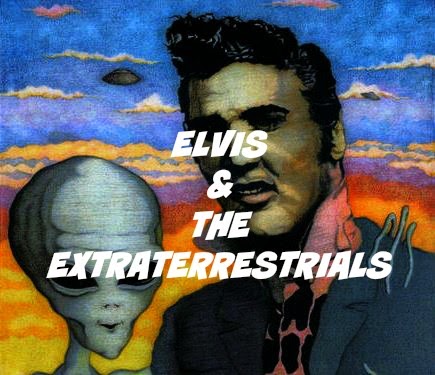 Elvis Presley reportedly had a lifelong belief in extraterrestrials and witnessed a number of UFOs during his life.

The 'King of Rock and Roll' is said to have had several sightings of UFOs during his life, with his interest sparked by an unusual sighting made by his father, Vernon, on the day he was born, January 8, 1935.

"His father told us he'd gone out to have a cigarette at 2am during the delivery and when he looked up into the skies above their little shack, he saw the strangest blue light. He knew right then and there that something special was happening." 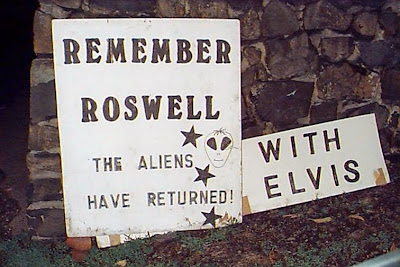 Renowned Elvis historian Cory Cooper, who's been researching the life and times of the rock 'n' roll icon for nearly 30 years, also verified the legend of the blue UFOs in Tupelo that night. He said he's personally heard that same story told multiple times by Geller and other insiders who were close to Elvis.

about musicians who have had contact with otherworldly beings - believes Elvis was later visited by aliens when he was a child.

Luckman's story is that the extraterrestrials allegedly showed Elvis a hazy image of a man in a white jumpsuit singing to a crowd, but the young boy "had no idea what it all meant at the time."

Gellar, who eventually became Elvis' 'spiritual mentor', confirmed he had extraterrestrial experiences while he was with the singer.

Recounting a time they had been driving through the desert and saw unusual lights, he stated:

"They were moving far too quickly to be airplanes, so we just chalked it up to UFOs.

"Another time, we were walking through his Graceland home and noticed odd lights in a field moving back and forth.

"Elvis was a deeply spiritual person and was very interested in the metaphysical. He had an eclectic outlook on things. Although he never had any major alien experiences, he was certainly a believer.

"He had his feet on the ground, but his head in the heavens." 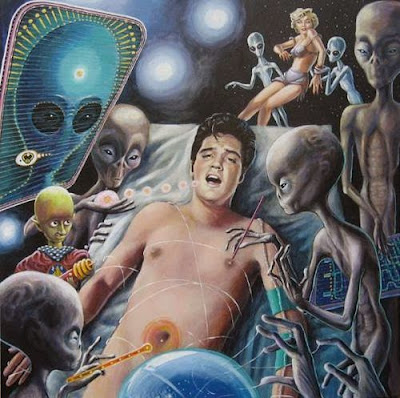 NOTE: Many people don't know that Elvis Presley was an identical twin. His twin brother was delivered 35 minutes before Elvis, stillborn. Although Elvis is considered an only child, he kept his deceased twin in his mind, mentioning him occasionally.

The loss of his brother may be one of the factors which kept Elvis interested in the paranormal. Over the course of his life, Presley amassed a sizeable collection of 350 books on the paranormal, occult, spiritualism, and UFOs. The collection bothered Presley's manager Colonel Tom, who at one point suggested that they burn all the books in a bonfire. (Elvis refused.)

In 2005, I was contacted by Margo Blu (Bluma Margaret Morrison - 1926-2009) who was a psychic channeler and claimed to have intimate knowledge of Elvis in the afterlife. She wrote an unusual book titled Herrre's Elvis..Broadcasting from the Stars

that detailed Elvis' thoughts and drawings sent to her from beyond. You can read some of Margo's recollections at Elvis, God and Me...Lon

Elvis in the UFO and other weirdness

Eternal Life in Heaven: Elvis Presley and Others