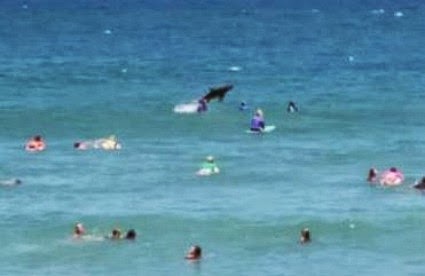 A budding photographer from the New South Wales mid north coast has captured what she describes as her "Oh-my-God moment", with a shark leaping out of the water during a local surf contest.

Steph Bellamy was at Macauley's Beach on Sunday for the Coffs Harbour Boardriders Club competition and was taking snaps of a group of mothers who had taken to the surf for a special heat.

"I took a shot, but as I stood up there was a splash and I thought, 'what was that?' and hit the button to take another photograph," she said.

"Then I heard the judges say, 'Wow, what was that?' and I expanded the shot out so I could have a look and it was as plain as day there was a major photobomb from a beautiful creature of our planet.

"It was a shark, and quite a large one."

She said the mums and kids were told to get out of the water, but 10 minutes later the competition resumed with the open men's heat.

Ms Bellamy said the swimmers in the water described the shark as "black with a white belly" and "about eight foot long".

He certainly wasn't after any of the mums, that's for sure, which is a good thing.

"It actually jumped out of the water twice and I somehow, pot luck, caught it with the second shot.

Everyone remained calm, she said, and there were "no meltdowns".

She believed the shark was chasing something when it leapt out of the water.

"He's launched twice at some sort of fish he was after, I think," she said.

"He certainly wasn't after any of the mums, that's for sure, which is a good thing."

The shark species is unconfirmed but Ms Bellamy said some "keen fisherman" in the club believe it may have been a mako, a junior bull shark or a spinner.

Ms Bellamy has been taking photographs as a hobby since age 10 and was surprised this latest effort has attracted such wide interest.

"I had a gentleman from Sky News in the UK just ring me and ask to use the photograph, so it's insane," she said. - ABC.net.au

The world famous physicist believes that artificial intelligence could pose a threat to our existence.

The idea of building an intelligent, sentient machine has been explored in books and movies for years, often with devastating results. In popular film franchises such as 'The Terminator' and 'The Matrix', humanity's ability to produce an artificially intelligent computer has inevitably led to the destruction of the human race.

Now theoretical physicist Professor Stephen Hawking has put forward concerns which echo the themes of these movies by stating that our efforts to produce a thinking machine could backfire.

"The development of full artificial intelligence could spell the end of the human race," he said. "It would take off on its own, and re-design itself at an ever increasing rate. Humans, who are limited by slow biological evolution, couldn't compete, and would be superseded."

Elsewhere however the development of intelligent machines is being hailed as a potentially world-changing breakthrough that could have a positive effect on all our lives.

"I believe we will remain in charge of the technology for a decently long time and the potential of it to solve many of the world problems will be realised," said Rollo Carpenter, creator of Cleverbot.

How the technology will ultimately pan out however remains to be seen. Read more at BBC

It was a clear summer evening in 1790. A settler in New York’s Schoharie County was sitting on the porch of his dwelling playing his fiddle. About 9 p.m., a bright shining light appeared in the northern sky with a great roar. He indicates that it grew in intensity until it would have outshone the noonday sun. The resident remarked that the light was so bright that he could have “… picked up pins in every corner.”

The German colonist said he saw what appeared to be a meteor passing west of him at a distance of about 250 yards and about 65 feet above the ground. He states that it kept close to the ground on the other side of the hollow. As the object moved over the countryside, it met with a rise of tall trees and as it did, it rose above them and continued on with the speed of galloping horse. When the object came upon the foot of a noted hill that the Indians called “Owelus Sowless,” it ascended as the ground rose and flew over the hill. The settler said that’s where he lost sight of it.

He describes “the meteor” as about 300 yards long. It had a snake-like shape, except that the apparent head “… resembled the root of a tree plucked up by force.” There was no appearance of a neck, and it was as thick as a young bull and tapered off like a serpent. Its appearance resembled “… a welding hot iron and sparking like it.”

He further stated that the intense heat warmed his entire house. He further reported that it left a stench similar to burning tar or sulfur that lingered for at least a another day.

The UFO observer was part of the first German settlement in Schoharie County. The settler swore out his story in the town of Carlisle on Aug. 23, 1823. The account was in the records of The Historical and Philosophical Society of the State of New York. - Syracuse New Times 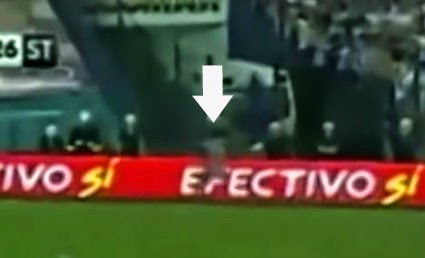 Whether you believe in the supernatural or not, this YouTube video of a "ghost" running around a football stadium is certainly spooky.

The figure of what appears to be a young man can clearly be seen jogging around the perimeter of a football pitch field in Argentina.

The video was taken during a recent clash betwen Racing Club and River Plate and has received 250,000 hits in just two days.

The figure goes back and forth at some speed as though he is using the edge as a running track but the crowd, stewards and players apparently failed to see what has been recorded on camera.

Sceptics say it is a clever bit of photography but others suggest the same figure was seen during the live match.

"In Argentina," say others, "anything can happen!" - See video at Mirror

Baku: The Legend of the Dream Eater

Sasquatch: A New Estimate of the Situation

A Christmas Carol and Other Christmas Writings (Penguin Classics)