The Mystery of The Men In Black

My brother Jake and I had a very interesting discussion about The Men in Black issue while I visited with him last week. We continued talking late in to the night as Jake had a great deal to say on the subjects of not only Men in Black but shadow people and reports of black mist appearing in haunting reports.

I will admit that all of those subjects have been neglected by me over the years and it was good to sit and talk to someone who had spent time reading and researching them in order to develop his own theories on these curious subjects.

I suggested that Jake should write something up for me about these topics to publish, not thinking he actually would, and to my delighted surprise my brother did. Jake's first article is about the Men in Black. I am hopeful while I take my hiatus from the strange and unknown Jake will send in his thoughts on all things that interest him in the blackness of the unknown.

The following is Jake's take on the Men in Black.

I have to admit that although having a family that is deeply involved in things considered strange and unknown I really did not keep up with most of the things being talked or written about.

There were a few topics however that always caught my attention yet seemed to be subjects that did not seem to get as much attention by the public or media outlets when I would search for information on them.

I thought little of it as that is how our government operates and believed the men sent out in typical dull clothes in Government Issue cars were simply G-men bored with their assignments doing a quick obligatory stop in to those making outrageous reports of UFO’s and aliens.

The reports I read seemed to play out like an old time black and white movie of a bunch of bored G-men forced to go where they did not want to go , who would take a quick look around with cigarettes hanging from their lips as they rush to get back to their hideaway to play cards and drink coffee until they are forced out in their dirty old rain coats to run through another quick stop at another wacko's house who called in yet another flying saucer sighting.

I held this attitude about the Men in Black issue until a few years ago when I finally realized I never asked my sister, who spends hours of her life researching UFO's, aliens and abductions, what she thought of the Men in Black or if she ever saw them or talked to anyone who had? I knew my sister talked to thousands of people over the years who had seen UFO’s and aliens but did not remember her ever mentioning the G-men in black to me.

A few years back while helping Chris with one of our family holiday get to gather’s I finally remembered to ask her what she knew about the infamous Men in Black.

I was astonished by her answer, she looked at me and said:

“I do not know anything at all about them. I never saw one, never spoke to anyone who saw one or had to deal with them and personally do not think they are government or military people if they do exist”

I could not believe my sisters answer and questioned her about this as I was sure someone over all the years she had been researching UFO’s and aliens would have had contact with the Men in Black somewhere along the way. I asked her about the abduction victims she interviewed and the answer was the same. Not one person ever mentioned the Men in Black visiting or sitting in black vehicles in front of their homes. I was really shocked at this and decided to look a bit more on what information I could find on this Men in Black topic.

I spent many hours searching into the material that is available on this subject and came to my own conclusion about who and what the Men in Black may be.

First I do believe that certain people who have had sightings of UFO’ and witnessed possible alien activity have been visited by strange men dressed in black who drive black cars or vans.

Years ago the descriptions of those reporting seeing Men in Black would talk about the fact they did look alike and many seemed to have an Asian type of face.
Newer reports however started to change and a clearer view was emerging concerning exactly how the Men and Black looked.

They were said to be tall over 6ft and oddly always exactly the same height. They were thin with very light skin, large odd blue eyes and either bald or wearing what looked to be wigs, but exactly the same wig and color on each man. They seemed to travel in pairs and wore sun glasses that covered the fact they did not seem to have eyelashes or eye brows. 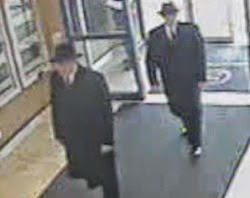 I could not find any photos of the above mentioned until the day I found the You Tube of the incident that took place in a hotel lobby where two Men in Black individuals were caught on camera while questioning the people in the hotel lobby about someone in the hotel area who had recently reported a UFO sighing. 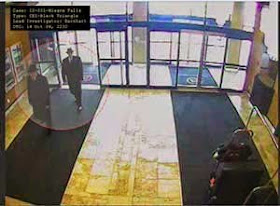 As I watched the video (I will send my sister the video for you to view on her blog) I realized at once who these men were and why they looked as they do.

I also realized and believe that along with my sister and a room full of people who worked in or had an extreme interest in science may have had contact years ago in a Yahoo chat room with one of these creatures.
In short I believe that the Men in Black are a certain type of alien visitor who are sent out after one of their crafts are accidentally seen or made contact with humans.

Surely there are many types of aliens that visit this planet that range from non-threatening to those who use us as experiments or harvest us for material they may need right through to heartless killers who simply do what they want with the humans they encounter.

The Men in Black I think are a specific type of alien who attempt to communicate with those who report seeing their crafts or catch them in their activities here on earth. I have no idea why they send out these duplicate looking robotic type beings to make these follow up calls but apparently that is exactly what they are doing.

Years ago an entire chat room full of people, who when web cam viewing first became available in chat rooms, all became familiar in this one Yahoo science based chat room with a man who called himself Sirius thinker or Sirius visitor.

He was the most unusual man we had ever seen. He was extremely thin with milk colored skin with huge eyes. I do not remember if they were brown or blue. He was completely hairless and extremely strange on all levels. He was extremely well educated in what seemed to be every level of science and seemed more like a wax robot then a man. His voice was not male or female but somewhere in between and very disturbing. He would creep out everyone who spent time talking to him and would avoid or refuse to answer questions about his appearance or private life.

This odd person made one last visit to this chat room very late one night where he simply stated he was returning to from where he came from as he finished his required time here and turned off his cam and that was that he was gone.

There were a few smart people who encountered this man in that chat room who somehow had a location on him that was narrowed down to a small town in Florida. A group of men decided this man was so unusual that they decided to join together and take a trip to visit this man as his manner, looks and knowledge was so odd they really felt he needed to be investigated. When they arrived at his last location they found a large plot of land in the middle of nowhere and not one sign of this man was anywhere to be found.

Once I viewed the hotel lobby video of the recent case of a visit from The Men in Black I knew exactly what our chat room friend had been and also believed that the ones caught on this video were two more just like him.

I think they are aliens who for reasons we may never understand are sent after the fact to areas where certain crafts and alien activity was seen and reported for reasons we do not understand. I do not think they harm people but of course we cannot be sure of anything as frankly we do not know who or what these being are or why they are here and even more confusing why they only seem to be seen after particular events are reported or certain Ufology information is involved.

I do know that after viewing the video of the hotel incident and listening to those who did deal with the two Men in Black that day that we all need to pay attention to strange men dressed in Black who are twin like in appearance and to keep a great deal of distance between them and us at all times.

Men in Black: The Secret Terror Among Us