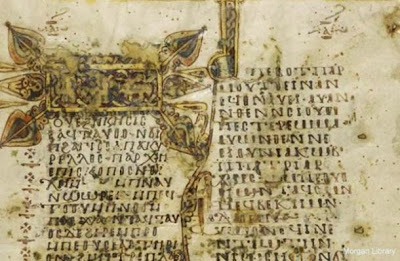 It was in March last year when reports flooded the headlines about a newly deciphered Egyptian text, dating back almost 1,200 years, which controversially described Jesus as having the ability to change shape. But just as quickly as the story made its way through major news sites around the world, it disappeared and has hardly been mentioned since. Why has the study and research surrounding this text faded into oblivion? Why has there been virtually no scholarly debate on the subject?

Written in the Coptic language, the ancient text written in the name of St. Cyril of Jerusalem, a distinguished theologian who lived during the fourth century, tells part of the crucifixion story of Jesus with apocryphal plot twists, some of which have never been seen before. They have been revealed thanks to a translation carried out by Roelof Van den Broek of Ultrecht University in the Netherlands, and published in the book Pseudo-Cyril of Jerusalem On the Life and the Passion of Christ : A Coptic Apocryphon (Supplements to Vigiliae Christianae)

The ancient text explains why Judas used a kiss, specifically, to betray Jesus. According to the canonical bible, the apostle Judas betrays Jesus in exchange for money by using a kiss to identify him leading to Jesus' arrest. This apocryphal tale explains that the reason Judas used a kiss, specifically, is because Jesus had the ability to change shape. Continue reading at ancient-origins

I received this odd report from Albert Rosales:

Allentown, PA: Thank you for accepting me. I'm glad I came across this site. Because I do have a question. Last May (2013) I was walking into a Farmers Market and there were 2 people standing at the pizza bar talking but as I was right by them they stopped. I remember seeing the tops of 3 childrens heads lined up on the other side of the pizza bar. Hair was identical like triplets but could not see any faces. But as I walked past them I felt compelled to turn around to look at them because something didnt seem right. Well the adults were standing there like stoic soldiers just staring at me. The 3 little ones didnt move a hair. What was ironic was that the so-called mother and father looked alike. She had not quite shoulder length blonde hair, he had dark hair. But they looked identical. Their eyes looked normal not like the black eyed children. And yet at no time did the children move. Then I just turned and walked away. Wish I just would have done a round trip around the corner and see if they were still there. Oh yeah and that reminds me, it was almost as if they knew I was coming there or knew me or had some kind of connection because as soon as I walked in they stopped talking and then were learing at me. It has been on my mind ever since it happened. It didnt scare me and I dont feel like Im being followed. My first thought about it was were they hybrids! It really was a freaky experience. And it wondered me sometimes, was I the only one that saw them or was it because I have a sense about things. Id be interested in what anybody thinks. Thank you so much - MUFON CMS

The following information was received from a reader:

My late uncle lived in Punta Gorda and worked heavy machinery back in the swamps digging out canals. He spend a lot of time helping to lay out North Port. His best friend, also now deceased, had a similar job in Ft. Myers. Once while visiting my uncle he told me three UFO stories after the subject arose. One was that his best friend in Ft. Myers had witnessed a saucer shaped craft land out in the swamp, in the daylight, while working. He tried to sneak up on it but it took off before he could. This would have been in the 60s or 70s. His other story was of coming back from dinner with my aunt from Ft. Myers and on one of the dual bridges, seeing a large dark object apparently siphoning energy from the power lines from the opposite bridge. BTW, my ex-brother in law told me he saw the exact same type thing east of Sarasota in either the 70s or 80s. The third sighting was by my uncle and my late grandfather after WWII when he was young, probably early teens. They saw an object doing incredible maneuvers, around Jacksonville, Fl, in the daylight during a car trip. He knew it wasn't any known craft because he was fascinated with airplanes and knew all types of craft. Your post on the SW Florida sightings reminded me of his stories. And he was the kind of guy that gave his word, didn't lie, lifelong NRA member, Florida Cracker, etc.. I was pretty blown away that day he, and my aunt, told me about their sighting and the other stories. They both said that UFOs were real and here visiting. Wow. Now, to give you an idea of how level headed they were on the subject they also told us this story. They eventually moved to the mountains of NC. One early evening Venus was especially stunning and some of the people of the valley freaked out and started to pack up thinking aliens were invading! My uncle just called them fools, told them it was only Venus. So he's the type that is smart enough not to fall for common identifications. Bill

Cryptoquest Field Guide To The Monsters, Ghosts, UFOs And Other Anomalies Of Florida (Cryptoarchaeology Field Series)

The Terrible Curse of Griffith Park

A British Surgeon Successfully 3-D Printed and Implanted a Pelvis

How a “Secret Agent” Used “Superpowers” to Commit Fraud


Chronicles of the Strange and Uncanny in Florida