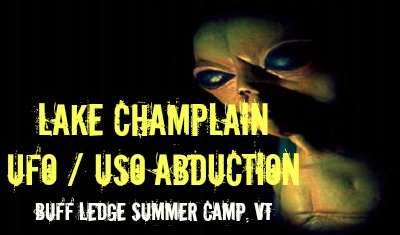 This particular case seems, at least to me, to lack the credibility needed to rank it among other better known abduction incidents. There was only one book written about the case, and it was authored by the chief investigator (who was a protege of J. Allen Hynek). Anyway...read the information that follows (as well as the links) and let me know your opinion:

On August 7, 1969, an abduction event took place at Buff Ledge summer camp for girls on the shores of Lake Champlain north of Burlington in Vermont. The case was investigated by Walter N. Webb, who spent 32 years at the Charles Hayden Planetarium in Boston as senior lecturer, assistant director, and manager of operations. Mr. Webb, who has had a lifelong interest in UFOs and who worked with J. Allen Hynek, wrote a book about his investigation called Encounter at Buff Ledge: A Ufo Case History

Two teenage camp employees, a sixteen year old boy named Michael Lapp, and a nineteen year old girl named Janet Cornell, were sitting on a boat dock late in the afternoon. The camp was mostly deserted because most everyone was gone into Burlington for a swim meet. As the sun dropped and the sky darkened, a bright light suddenly appeared. Michael said that he at first thought it was Venus. (Note: It couldn't have been Venus. Venus was a morning star on that date, rising at about 2:00 am on the Eastern horizon, not visible in the late afternoon over Lake Champlain)

As the object drew closer, the shape became more clear-it was a saucer shape. Suddenly, Michael remarked, "Wow! Venus is falling." But he knew better. The lone light now dropped three smaller lights from it and they immediately soared over the lake. The larger object soon disappeared from sight. It was obvious the objects were being intelligently controlled. The UFOs seemed to perform for the two mesmerized teenagers, doing zigzags, loops, and then would suddenly drop like a falling leaf.

Now, the three UFOs moved ever closer to the two friends. The UFOs formed a triangle formation, and then two of them pulled away, leaving just one out front. Later, Michael would recall hearing something that sounded like "a thousand tuning forks" as the two objects pulled back. The last UFO then passed right over them, shot upward and briefly disappeared. Soon, it would reappear, tilted to one side, then drop straight into the lake.

After a time, it would emerge from the lake, and then begin moving directly toward Michael and Janet. The UFO was so close now that two beings could be seen through the transparent cupola of the object. The beings appeared child-like. According to Michael, their necks were elongated, they had big heads for their body size. They had no hair, but large eyes which wrapped around the side of their heads. He thought that he was in mental contact with the beings.

For some odd reason, as Michael watched the aliens, he slapped his knee. One alien did likewise. The UFO was now directly over their heads, as it shot a beam at the two. Michael grabbed Janet's shoulder and pulled back, landing both of them on the deck on their backs. He then was terrified of being taken, and screamed, "We don't want to go!" The next thing Michael recalled was sitting on the dock and gazing at the object, which was now farther away from them. Janet seemed to just sit in a trance. It was now totally dark.

Soon, they heard members of the swim team talking as they made their way back into the camp. The UFO moved higher up into the sky. It flashed its lights a number of times, and then disappeared. Michael wondered, "How long have we been here?" Nothing would be said about what happened that late afternoon. When summer camp ended, the two went their separate ways. Michael rarely thought about his experience for the next five years, but as time went by, he began to have disturbing dreams.

Ten years after Michael's experience, he decided to contact the Center for UFO Studies. He was referred to investigator Walter Webb. After becoming familiar with the details of the case, Webb suggested regressive hypnosis to relieve Michael's nightmares, and hopefully regain his lost memories. The sessions brought back the events of the late afternoon experience at Buff Ledge. But now, he recalled being lifted by a beam into the waiting UFO, and going into a larger UFO. He also remembered Janet lying on an examination table.

The beings shone a light into her eyes, took skin samples, and fluids from her body. "The aliens all looked alike, Michael recalled, and had those large eyes, a mouth without lips, no ears, and two small openings for a nose." Michael also described the beings as having three pointed, web-like digits for fingers, and their bodies felt "damp and clammy." Michael recalls the aliens wanted life on our planet to be like theirs, without violence.

Janet, now 29, would also be regressed. Her recalled memories would only strengthen the case of alien abduction. She recalled the "coldness" of the table. Something had pulled her hair, and pinched her neck. There was no disharmony in Michael and Janet's statements.

Each MMPI score was analyzed by a local psychologist and R. Leo Sprinkle (University of Wyoming). Basically, Janet's profile appeared normal and free of sociopathy. Michael's scoreindicated normalcy except for a possible intellectual rebellion toward traditional ideas and parental/societal rules, echoing his creative life style.

The PSE tests were evaluated by a certified stress analyst, Ernest Reid (the PSE expert in the Andreasson case). While both subjects were shown to have observed a UFO, the close encounter/abduction scenario proved inconclusive. In Michael's case, the analyst concluded that the subject's test was administered incorrectly by another party. Although Reid later administered Janet's test himself, he left unexplored the abduction segment due to its having been uncovered through hypnosis.

The two personalities comprised a study in contrasts. When I last saw Michael six years ago, I characterized him then as bright, idealistic, having psychic and mystical interests, leading a creative and artistic lifestyle, and lacking in strong motivation. His life and interests appeared to have changed drastically following the UFO experience (Some of these changes, however, were undoubtedly due to an unhappy home life and to normal teen-to-adult maturation.) Unable to apply himself at college, he dropped out of schools three times, worked at odd jobs across the country, and finally returned to college where in 1978 he succeeded in graduating with a B.A. in religion. When I last contacted him some years ago, he was pursuing a modeling and acting career.

Janet, on the other hand, followed a straight and narrow path to her present station in life as a wife and mother. She appeared equally bright, well-adjusted, confident, outgoing, highly motivated, and leading a conventional lifestyle. An excellent student, she graduated from college with honors in 1971 with a B.A. in psychology. After holding several responsible administrative positions at an ivy league college, Janet married a physician in 1978 and now cares for her four children, ages 11, 8, and 5 (twins). Unlike the male witness's continued obsession with the UFO experience, Janet has become preoccupied with family life and prefers to forget the encounter.

It was established to my satisfaction that both witnesses were honest, credible individuals who did not perpetrate a hoax (indeed, they had no opportunity for collusion) nor suffer some sort of shared hallucination or delusion.

The probability is high, in my judgment, that Michael and Janet experienced a real external event of unknown origin.

NOTE: Here is a PDF with much of the information from Walter N. Webb's book Encounter at Buff Ledge: A UFO Case History...Lon

UFOs, ETs, and Alien Abductions: A Scientist Looks at the Evidence