Reader Submissions: Living in a Killer's House / Approached by the Departed

I received the following accounts several years ago:

When I first moved to GA from FL in 1991, I moved into a house in Smyrna with my future first wife and her two kids. The house was a 2-story ranch built in the early 60s. The basement had a large family room running almost the length of the house along with 2 bedrooms. There were several windows on the back side of the house, up high in the room, at about ground level outside. This is the room that had the TV. The house also had lots of walls with large drywall patches, that I initially couldn't explain. Anyway, at night I always felt something was watching me from those windows while I was watching TV. And it wasn't a warm and fuzzy feeling either. It was the kind of feeling of, I can't look at the window, because if I see something I will scream.

There were two weird, unexplainable things that happened in that house while I lived there that I know about. The first happened when I got home from work one late afternoon and went downstairs and laid on the couch with my back to the room and waited for my wife to get home. After a few minutes I heard someone walk from the direction of the stairs towards me and up behind me and stop. I figured it was my wife who was checking on me and thought I was asleep. Then I heard a big sigh and them walking away. Well about 20 minutes later my wife came home, I was all alone in the house!

The next thing that happened was when my stepdaughter and wife were cleaning her bedroom, which was downstairs in the basement. They were cleaning her dresser together and all of the sudden, a music box on the dresser opened up by itself and then closed by itself. Both of them initially just stood there stunned and didn't say anything and then came and got me.

One day, our neighbor Betty came over with a newspaper article. She had lived next door for years. She told us that a hit man for the Dixie Mafia had lived in the house for years. His name was John Elbert Ransom and Georgia authorities had him associated with 25 murders. At the time I lived in the house, he was in jail for conspiracy to commit murder. Betty told us all kind of stories, including that when they arrested him, they cut holes in the walls of the house looking for illegal drugs and guns.

I always wondered if one of his victims had come back to haunt him. 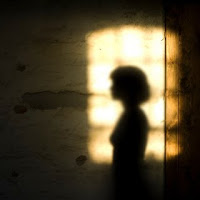 About 8 years ago, I was living with my boyfriend who was one of 7 brothers and one sister. I was told about the sister Diane who was killed in 1971 in a car accident. My boyfriend's 19 year old son lived with us until he was later killed in an accident. The next several weeks after he died, I heard footsteps coming to my room and sensed him by my bed. On one occasion, I felt so strongly he was standing there I even said "I know you are there...it's ok to show yourself. I wont be afraid". He replied telepathically "I can't always show myself...it's a universal law".I had never heard the term "universal law" prior to that.

One night, around 3am, I heard loud talking and footsteps coming through the house. Suddenly, my boyfriend's son was at the end of my bed saying "Hey Sue! Diane is here and she wants to talk to you". I turned and saw a girl next to me in bed! She looked like a real person even though it was dark. I noticed her hair shimmered...catching any bit of light and her skin was white but wasn't pasty and had a luminous quality. I said to her "Diane, you are here! Every since I have lived in this area and been around your family I have been told you are dead." I soon found out not to say this to a spirit/ghost because she quickly corrected me very sternly saying "I have always been alive...I have NEVER been dead!" She told me to tell the family her name was on a wall and now its covered. She kissed my cheek and hugged me then vanished.

There I was sitting up wondering if I was dreaming and wondering why my boyfriend wasn't next to me. I soon heard the toilet flush and my boyfriend climbing back in bed. I asked him if he heard talking or noises. I told him his son and sister were just here and I talked to his sister. He first told me "aww, go back to sleep." But I described his sister and told him what she said to me and he sobbed as the other family members did as they said "Oh, yes, that was Diane".

I later learned what her message meant. When Diane was a little girl she wrote her name on the basement wall in the old house where they had lived. Since it had been torn down so indeed her name is "covered". I have been visited by relatives, friends and others I do not know. Sue