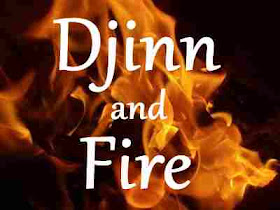 Over recent months there have been a series of small fires in Turkey households said to have been caused by Djinn. In Muslim tradition, a djinn is a spirit often capable of assuming human or animal form and exercising supernatural influence over people. It is similar to a poltergeist as far as the activity...though a poltergeist is generally developed from a 'thoughtform manifestion' that may or may not be associated with an existing earthbound entity. I have posted a few of the known incidents in Turkey as well as a major case in Malaysia in 2010. Please excuse the translation.

12/4/2012 - Siirt Province, Turkey: Mysterious fires that have broken out seemingly for no apparent reason in the house of the Toprak family in Siirt province over the last four months have aroused great curiosity in the region. The Toprak family is distraught over the mysterious fires, as between 300-400 fires incidents have occurred in the last four months. Almost all of the family's belongings and furniture have been reduced to ashes for no known cause. The Toprak family's household items apparently catch fire spontaneously, with some people believing that the fires have been caused by supernatural forces. The father of the family, Zeki Toprak, told the Anatolia news agency that between 300-400 fires have erupted in four months. Stating that they had to move house four times in as many months, Toprak said such mysterious events have continued to happen in each house they have moved to. Similar mysterious fires have also broken out in the classroom of fifth-grade-student M. Toprak.

The coat, notebooks, books and several other items belonging to M. Toprak have caught fire spontaneously in front of the students and teacher's eyes in the classroom. The teacher of M. Toprak told Anatolia that they searched M. Toprak for any material or substance which could have caused the fires, but did not find anything. The Siirt Governor's Office, the Siirt Provincial Mufti's Office and Siirt University have all taken an interest in the family. Siirt Governor Ahmet Aydın, who also spoke to the agency, defined the incidents as supernatural and said it was impossible to understand having seen the many items that apparently spontaneously combusted. Aydın also said the governor's office is giving food to the family three times a day as they could not cook any meals in their house. Siirt University Rector Murat Erman said the university is extremely interested in the incidents and has established a team to investigate the possible reasons for such mysterious fires. Siirt Province Mufti Faruk Arvas pointed out that the fires might be due to the djinn. In Islam, the djinn are spirit beings that can be good or evil. Arvas stated: "According to our faith, there are beings called djinn. The fires might have been started by such beings." (Cihan/Today's Zaman) CİHAN - The Poltergeist File 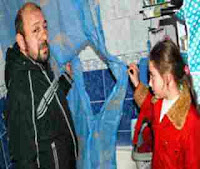 (NOTE: Please excuse the translation) 1/3/2013 - Ankara, Turkey: Anne Bu Knight, daughter of Nur İleyda unable to sense where the fire is unknown due to the recounting her daughter's' bad 'directed by jinn' claiming, said:"Yesterday afternoon, at least 10 since the fire broke out in our house. Bed, bathroom bulkhead, the work table , towels, clothes was a fire. Featured fires, We turned off on my daughter shouting Notification. daughter upstairs neighbor, while the fire was going to sink. went to a relatives house, there was a fire. I realized that my daughter has an uncanny situation. This situation, Siirt, mysterious fires, but we keep a school and home. demons believe that these fires çıkarttığına."Cevat Knight operates in the county of coffee did not fall sleep at all in the eyes of the house, they had to collect a large part of goods and ready-holding containers filled with water, he said. Knight,"District Governor and asked for help by going mufti, told us to take our daughter a doctor. Mufti, also suggested us to read the Quran. Beer and the environment met some of the professors. Quran imam read from it in our house, but 10 minutes after the fire broke out again. Himself talked to a few people dedicated to this work . daughter demons believe tarafndan routed. I can not find any other explanation for," he said.

Knight family s that never sleep, slept Bediha relatives Aktas, if söndürülmediği of the building in the event of a fire yanabileceğini describing Kemal Aktas the "Alternate wait, trying to stay awake. İleyda'yı not leave you alone. alone when fire breaks out strong. anxiety in waiting, fearing," he said. habermonitor.com

(NOTE: Please excuse the translation) 1/4/2013 - Ankara, Turkey: After news of the mysterious fire that occurred recently in Siirt urban district of Ankara there was a similar case.

Ankara 's Knight persons aged Bahcelievler family house in the neighborhood of merchandise at various intervals burn 10 times a day has led to fear and anxiety. Indicating that they were helpless in the face of this situation the family with 4 children in their homes permanently fire due to the release noted that they were keeping guard day and night.

mother Ayşe Knight, daughter of Nur İleyda unable to sense where the mysterious fire, said:"The bed, bathroom bulkhead, work desk, towels, robes was a fire in many places, such as. Featured fires Notification shouting at my daughter do we put on. daughter went upstairs neigbhour the fire broke out in the sink. Again, we went to a relatives house, there was a fire. then we realized that my daughter has an uncanny situation. This situation came up last week in Siirt, a school and We keep the same mysterious fires in the home. demons believe çıkarttığına these fires,"he said. The father, Jawad Knight kahvecilik face of this situation in the district were keeping constant guard, his eyes did not fall sleep at all that they had to collect a large part of the house and belongings, he said. İleyda family's youngest daughter Nur, the"fire walls and doors at a time When the lights are striking. Is very short. Then he leaves traces. I'm so scared because of continuous,"he said.

Knight family, relatives, indicating no sleep slept Bediha Aktas,"as well as maybe the building will burn the house put out a fire broke out. would lead to greater dangers. This is a big problem, do not know how to be solved,"he said. Ventilation, fire brigade was called to the fire in the same way that space Kemal Aktas relatives, the"wait and turns, trying to stay awake. İleyda'yı not leave you alone. Alone when fire breaks out strong. Worried and scared look,"he said. habermonitor.com

A Fire Djinn in Malaysia

Between May and December 2010 a series of strange incidents occurred in the home of a seventy-three-year-old widow, Zainab Sulaiman, in a village near Kota Bharu, Malaysia. Objects disappeared and reappeared, clothes were found cut to shreds, food scraps were strewn across beds and large quantities of salt and smelly fish sauce were dumped into cooking pots.

It was all decidedly annoying, but Zainab and her family – a widowed daughter-in-law and two granddaughters – didn’t find it particularly frightening. They were merely being pestered, they assumed, by a mildly mischievous spirit. Even when a pair of pants, missing for three days, reappeared inside the refrigerator, they remained calm, hoping the imp would tire of its tricks.

But in mid-December the weirdness escalated dangerously: over the next ten weeks dozens of small fires broke out on clothes, rugs, linoleum and mattresses throughout the residence. Sometimes several occurred within a few minutes; on one hectic day there were no fewer than 78.

Although all were quickly extinguished and surprisingly little damage was done, Zainab didn’t get a lot of sleep during those weird weeks. Her flimsy wooden dwelling, elevated on stumps and packed with clothes and bolts of cloth, was a veritable tinder box. She didn’t dare leave it unattended.

News of the activity spread quickly, and on January 4 a group of Muslim holy men arrived and declared the house was infested by invisible entities known as djinn. (Djinn is the plural; the masculine singular is djinni – or genie)

Djinn have featured prominently in Middle Eastern folklore since time immemorial and Mohammed, under the direction of the angel Gabriel, incorporated them into Muslim theology. Many of the tricks they reputedly play are highly reminiscent of those often attributed, in other cultures, to poltergeists.

Over several months, a plethora of holy men conducted exorcisms until the djinn weakened and left the location...actually scrawling a message on a banknote “Goodbye, everyone”.

Some aspects of the case strongly suggest the episode was genuinely paranormal:

* Zainab never sought to profit from the episode. It had, in fact, cost her dearly. Many of her possessions were destroyed, and she’d paid the Muslim priests 1000 Ringgits for their failed exorcism.

* She seemed completely honest, and it would have been virtually impossible for any of the family to start the fires without her noticing. No outsider could have hoaxed them.

* No family member had an obvious motive to hoax the affair.

* The steady escalation of weirdness: beginning with objects moving and disappearing, progressing to the slashing of clothes, then to the weird message, and finally to the fires – conforms to patterns of polt behaviour noted elsewhere.

* The very fact that more than 200 fires occurred without at least one of them doing serious damage – or for that matter completely consuming the flimsy dwelling - does seem almost miraculous. Uncannily localised fires have been noted at other polt sites.

* The surges in weird activity that occurred when strangers arrived corresponds with known poltergeist behaviour.

* The presence of adolescent girls is sometimes seen as a veritable hallmark of a genuine poltergeist case.

* The djinn’s rather pointless message was reminiscent of others found at poltergeist sites.

* After the holy men failed to “cleanse” the house, the rate of fire-starting sharply increased. Similar sudden escalations of activity after attempted exorcisms have been noted at many other poltergeist sites.

On the other hand, a few things suggest the episode was bogus:

* Although none had occurred for ten days, two fires broke out on the very day I visited. Some might see that as a little too fortuitous.

* The family seemed strangely unexcited by the fires.

* At one stage so many of the girl’s uniforms were damaged that they had to stay home from school. Could that have been a motive for hoaxing?

* Most suspicious of all was the similarity of Wan’s handwriting to that on the 10-Ringgit note.

But regardless of whether or not they were genuinely supernatural, the djinn, or the hoaxer(s), have called it quits, and Zainab can sleep soundly once again. - Excerpts from poltergeistfile.com

The Vengeful Djinn: Unveiling the Hidden Agenda of Genies

Legends of the Fire Spirits: Jinn and Genies from Arabia to Zanzibar