In light of the recent horrific incident in Newtown, Connecticut, the following past post may bring some solace to those who believe in miracles and a divine spirit:

Some places and dates are branded by disaster, by the stories of one horrible day that no one can forget: 9/11, Oklahoma City, Columbine. What sets this horrible day apart from others is about what didn't happened. The small town of Cokeville, Wyoming was the sight of a parent's worst nightmare on May 16th, 1986 when a mentally disturbed man and his wife entered an elementary school with guns and a homemade gasoline bomb.

The man's name was David Young, a former town marshal. He had been the tiny's towns only police officer in six months during 1979 and when he was fired for misconduct, he moved to Tucson, Arizona. He and his wife returned to Cokeville in 1986 and carried out their insidious plan. Young had a manifesto called "Zero-Infiniti" and proclaimed "this is a revolution!" as he and his wife took an entire generation - over 160 children and teachers - hostage and wouldn't release them until he was given 300 million dollars and a personal phone call from Ronald Reagan, the President of the United States.

Keeping all the children in a single room and standing in the middle of it, the Youngs began a standoff that would last 2 1/2 hours. David left the room leaving his wife alone and it was then that the bomb went off instantly killing Doris. The bomb had been on the shopping cart and, though it was homemade, it was powerful enough to destroy a section of the school. Moments before the explosion, Young handed the shoelace and clothespin to his wife and went across the hall to the bathroom. Doris Young apparently didn’t realize how sensitive the trigger mechanism was and accidently caused it to go off.

The blast knocked Williams off her feet. The room erupted in chaos as children ran screaming in the dark, smoke-filled room. While many kids, including her friends Amber Kemp and BranDee Prows, escaped through the window, Williams crawled toward a light at the doorway. She crossed paths with David Young at the door, and he tried to grab her shirt, but the tide of running children prevented him. She escaped but saw flames on her shirt and felt an odd, tickling sensation on her shoulder. She started rolling to try to put it out, but the burning sensation only intensified. She was saved from further burns when some teachers found her and slapped out the flames. Then they told her to run.

Running toward the blast Young started to randomly spray the area with gunfire. Some kids were grazed by whizzing bullets, but none were hit. Through the chaos, everyone was eventually accounted for except for the Youngs. Upon finding his burning wife, Young had shot her and then returned to the bathroom and shot himself.

The miraculous thing is that despite the shooting and the detonation of the bomb, the Youngs were the only casualties. Some children and teachers suffered severe flash burns from the explosion and minor bullet wounds, but all were alive. In the last 20 years, this event has become known as The Miracle of Cokesville.

The story runs deeper. Bomb experts called out to the scene were stunned. They couldn't figure out why the school was still intact when a bomb that size should have obliterated the entire side of the building leaving everyone - the hostage-takers and the hostages - all dead. How was this possible? To this day no one has provided an explanation. The children and teachers were alive and that was all that apparently mattered.

Then the children began to tell stories of angels who appeared to them and instructed them to move to a corner of the classroom because the bomb was about to explode. Some reported seeing beautiful figures in white while others said that they saw long-dead relatives telling them not to be afraid. Many said later that there was an angel in the room for every child and that each was protecting their charge. Some children said that they didn't see anything, but rather heard disembodied voices telling them that the disaster was about to happen and that they would be spared.

Glenna Walker’s children saw a “beautiful lady” who told them to go near the window right before the explosion. When looking at a picture in a locket later, one of the children identified the lady as Walker’s deceased mother. 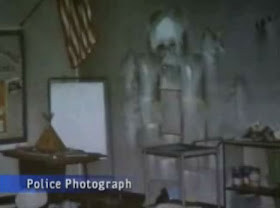 Amy Bagaso Williams was a fifth-grader at the time of the incident. Recently she said, “You come to realize there are no coincidences. Too many things happened to the point that all of us survived that day. It was not an accident. It was a loving Heavenly Father who had a plan for all these children. He prevented it from turning into a horrible tragedy.”

Williams had third-degree burns on her face, neck and back. Because there were more than 75 injured, ambulances were dispatched to Montpelier, Idaho; Kemmerer, Wyo.; Evanston, Wyo.; and to Utah. Her parents drove her to Montpelier, where the hospital had not received word of the bombing. “Get prepared for a long night,” Williams' father told them.

Williams was lying in a hospital bed when she learned two Melchizedek priesthood holders were going room to room giving blessings. She asked for a blessing.

“The blessing said Heavenly Father was there and watched over us, that he loves us, and although this terrible thing happened and my body was burned horribly, that I would heal and have no scars,” Williams said with emotion. “The scars I would have to overcome would be scars of forgiveness and trust.” 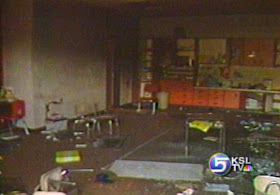 Her pediatrician, didn’t think such a promise was realistic, but Williams, feeling the same peaceful feeling she had felt earlier, believed the blessing. New skin grew in, and to this day she has no scarring, despite severe burns.

“It was a miracle. I healed completely. Nobody has any idea I was in the Cokeville bombing,” she said.

To commemorate the 20th anniversary in 2006, a group called the Cokeville Miracle Foundation compiled a 500-page book of accounts by many people who lived through the fateful day and titled it WITNESS TO MIRACLES, Remembering the Cokeville Elementary School Bombing

Susan Fiscus, Karla Toomer and Chemene Petersen gathered information for the book. Survivors and residents of Cokeville were invited to a town celebration, and some talked about the event for the first time in two decades.

To Save the Children

Where Angels Tread: Real Stories of Miracles and Angelic Intervention