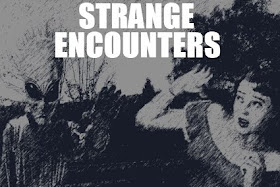 Yesterday I posted a report from Southwest Florida that described odd UFOs that would suddenly 'manifest' into visible anomalies. I included links to reports of other strange phenomena in the same general area. A few weeks ago I posted a cryptid sighting in Ft. Myers, FL. There has been a substantial number of odd encounters in Southwest Florida, in particular Charlotte, DeSoto, Manatee, Lee and Hardy counties.

Today I received an anoymous report referencing 2 humanoid sightings....one in Ft. Myers and another in Lehigh Acres, Fl. Both incidents were in Lee County, Florida.

Hi - I recently had an encounter with a bird-like creature but I know it wasn't a bird - it looked to be a flying person. I know it sounds weird and crazy but I know what I saw. Well here's the whole story. On Feb, 5th around 11:30pm my older sister and her husband were taking me, my little sister, my mom and my two nieces to eat at Denny's in a near town (Fort Myers, FL). Well as we were driving on I75 out of nowhere through the windshield I see a person with wings fly over our car. It went over two times back and forth. I got a good look - it looked like a person with wings but then again it also looked like a pterodactyl (pterosaur). My brother-in-law also saw it and agreed with me. He says it was not a bird! Well that was my encounter with the creature.

My nephew also witnessed a person-like creature. He was walking to his girlfriend's house late at night and by her neighbor's house there are some trees. He said he saw a person / figure standing in the trees looking at him. He asked his girlfriend if she also saw it - she said that its always there. He then started to walk closer to get a better view of it when the creature jumped off the tree onto his girlfriend's neighbors fence causing it to make rattling noise. The dogs started barking and then the creature flew off in front off his eyes. It then ran into his girlfiend's house scared it would come back but it didn't. My nephew's encounter happened in Lehigh Acres, FL a couple of days before my encounter happened! We have no clue as to what it is or why it would be following us?! It is very mind boggling!!

Digging deep into the history of the area produced another cryptid in Lee County, FL. This was a monster that was eventually reported in the local news:

A correspondent contributes to the Fort Myers Press a story of an immense serpent lately seen crossing the Caloosahatchee river near Chokoloskee, and the Press calls upon The Herald to match the story. As we have no big snakes in this locality, The Herald gives it up and begs to repeat what it said to Col. Tom Appleyard, that it is not an authority on snakes; and as no one in the office drinks liquor, none of us have had the pleasure of seeing snakes.

But here is the narrative of the Lee county serpent as it appeared in last week’s Press:

Col. Demere and Ervin Lowe came down from Needhelp last Sunday [presumably October 4], and report having seen an immense snake swim the river about two miles from here.

They say it appeared to be a great log on the water when they first saw it, but they learned it was a snake when they got to where it was, as the tail was just leaving the water on the south side of the river, and its head stood up four or five feet high, twenty yards from the river, and looked as large as a nail keg.

Of course the reptile must have been between fifty and sixty feet long, and its body looked about the size of a flour barrel. Now this looks fishy, but there is no one in this section that would doubt the veracity of either of these gentlemen.

We have since learned that the Indians have told of such a snake twenty years ago, having been seen by them in a certain swamp, and they always kept away from that swamp. This will give a good color to the snake story.

The serpent was heading to the south-east, and will possibly take up in the first thick swamp that suits his convenience. - Punta Gorda [Florida] Herald, October 15, 1908

Flying cryptids and / or humanoids particularly fascinate me. Here is a video from 'Animal Planet' about an Ahool encounter in Lee County, FL. The Ahool is a flying cryptid, many times described as a giant bat, pterosaur or even a flying primate.

NOTE: Granted, there have numerous Bigfoot or Skunk Ape sightings in Southwest Florida over the years. I'm not saying that these are not interesting cryptids but I'm searching for the more 'obscure' encounters...be it natural, non-terrestrial or otherwise...Lon

Cryptoquest Field Guide To The Monsters, Ghosts, UFOs And Other Anomalies Of Florida (Cryptoarchaeology Field Series)