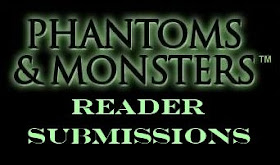 I received the following emails in response to recent posts:

Hey Lon - I just read your article on 'Skinwalkers'.

My mom died in May of 1988 but talked many times about a certain occurrence that happened to her when I was 7, which would have been 1970. In all the places we lived we had ghosts or whatever you choose to call them, and when you grow up in that - it's just normal - as odd as that might sound.

Anyhow, my mom was VERY physic and about this time (1970) she started hanging out with a lot of witches and a lot of criminals. Not that the 2 are related. Just to let you know, my brother and I had a very interesting childhood. My brother is 3-4 yrs older than me - depending on who had the last birthday and he and my mom were very close. Well, she and my brother Terry would play a lot of mental telepathy games in his room in the basement. If she was around, she would just focus on him and they'd go down to his room and do these mind games. Like what color, number, whatever am I thinking of. Stuff like that.

Anyhow, we lived in South Minneapolis at the time and it was sometime in 1970. They had been downstairs doing their thing and they came up freaked out. What my mom told me was that when they were doing their mind thing it felt like she was being pulled backwards out of her body. It was like her spirit was being drawn towards the basement window. It was one of those really small narrow ones that no one could ever fit through. She had been facing Terry and as she was being pulled, she could see Terry's (my brother) face. She said he looked terrified as he was looking at her.

She told me she fought with everything she had to get back into her body and was finally able to do so. When she got back into her body she asked Terry what happened. He told her that she started turning into a giant black cat. They both came up and told me what happened and then again many times over the years. The story never changed and I never doubted it. One thing I should say also is she always said she wanted to be a big black cat. Like a black panther. I don't know how it happened but I believe it to this day.

Then around 1979 or 1980 my mom and I lived in N.E. Minneapolis and one of her friends came over. This was a man called Moe. I don't know if that was his real name or a nickname but I remember he was super cool and belonged to Wicca and was something of a high priest. My mom always said they were the good witches and he performed exorcisms. She had a couple friends who did but Moe was the nicest. Well, she was in the tub when Moe came over so we were sitting at the kitchen table. I have ALWAYS been afraid of werewolves so thought I'd ask him about them - knowing that he would tell me they were just made up. That wasn't what he told me. He paused and said "I can't tell you if there are or aren't werewolves. I have read about werewolves being in the hills in Russia but I don't know. I DO know a woman who can turn herself into a cat though."

Well, the cat thing I really wasn't thinking too much about because I was now concentrating on the werewolf issue. My mom and I were not close and it's weird because we never had a 'normal' family and didn't talk about what most people do I guess but later it dawned on me that (what I have come to believe at any rate) is that that was Moe's way of telling me about my mom. Perhaps she was finally able to learn and harness the energy it took to make the change. She wasn't home much but spent a great deal of time with her witch friends so who knows? Anyhow, I value Moe's input and I know from Terry and my mom both that at least that one time she was indeed turning from a human physical form into a giant cat. How this is possible I cannot fathom or comprehend but I believe it because the story from 1970 to when she died in 1988 NEVER ONCE CHANGED.

For what it's worth - I thought I would share. Take it easy and the best wishes to you and yours - Liz

Lon, my heart goes out to this woman (in Twenty-Three Years Of Constant Fear ). However, if her father was having similar problems, that could be a factor in her own issues, whether actual encounters or imagined. I don't say "imagined" as if I assume they both had a mental deficiency or disease. Perhaps they both are sensitive to magnetic or other energies, which can trigger an abduction scenario in sensitive individuals. (Scientifically proven.) I can't help but wonder if any of her psychiatric help discussed this possibility with her, and if it helped relieve her anxiety or not. The disappearance of her father, who strongly believed he was being abducted, is a powerful trauma on its own, even if she did not have the experiences she reported.

There are some things that bothered me about the story. Like the friend and her going through something, but not having talked about it at all. That could have been because she "flipped out" having an experience in her mind, and perhaps in her panic, convincing her friend something was going on as well. The friend, being a supportive, true friend, has stuck by her through the years, but perhaps can't tell her she was flipping out, or scared her to death.

You know I have had my share of odd experiences and encounters, and am not certain if they were real or not, or the result of being sensitive to various energies, such as microwaves and electric towers, and not wanting to know for sure at times, because I didn't want to deal with the reality if such horrific scenarios were real. So, I can empathize with the woman who wrote to you.

The only advice I can give, completely in confidence, without revealing my identity, is this woman might feel better if she were able to focus on the fact that she is a survivor. She has had no lasting physical affects that she is aware of, and she needs to concern herself with what she has control over: trying to heal from the emotional impact of these traumatic events in her life, and preparing herself mentally on how to deal with any future encounters. If and when another situation begins to happen, she could respond as many have, do all in her power to convince herself she is dreaming. That she is having a panic attack in her dream, and try to breathe deeply and calm herself, that she will awaken in the morning and be OK. Even if her clothes are inside out or missing, she can assess that she is OK in the morning, all in one piece and not hurt, and focus on that part of the resolution of the experience.

I would also recommend that, for the confidence, clarity and reassurance it brings, she pray for protection, for peace, for wisdom to know how to respond and react and reason the best for her own health and safety.

I hope in some way what I have said will be of help to her, as it has to me.

Hello, I read your blog every day and am a fan on Facebook so I finally decided to email an experience in.

Over a period of around seven years while I was growing up two figures regularly appeared to me at night (sometimes each night of the week, sometimes only appearing once or twice a week) they would appear just outside and just inside of my bedroom doorway, and they never tried to move any closer into the room. They would appear while I lay in bed. One figure appeared to be male, the other female. They were perfect silhouettes with no features to speak of. However, they appeared to be made of something similar to static on a television. They were brightly coloured, as if made of tiny blue pink and green dots of static. Sometimes they stood still and watched me and others they moved quickly and fluently around the area they were standing in. Although a small part of me told myself I should probably feel frightened, I never felt threatened by the figures and I never fell asleep as calmly as when they had appeared. Sometimes I would lose focus of them for a second but they would always reappear a few seconds later. As I grew up I stopped seeing the figures (Probably at about age 11.)

I've had many different experiences with the paranormal since then, having grown up with a passionate interest, but I have never seen anything remotely like these figures since they stopped appearing to me, and I have never really come across anything that could explain it, either.

I would greatly appreciate any info or any similar experiences you have heard about, although it doesn't seem important when compared to some of the things you are emailed with I've been trying for a long time to find something out about what they were.

Thank you very much for your time
Bernice

NOTE: Please feel free to comment on these submissions. I appreciate the time and effort made by readers when they forward their experiences and thoughts. I sincerely attempt to answer all inquiries and to post credible well-written anecdotes. Thanks again for making this blog a favorite for thousands of readers...Lon
Lon Strickler at 2:24 PM
Share
‹
›
Home
View web version