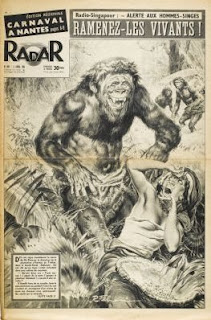 Some mythical creatures have their origin in tradition and tales from the distant past. However, each culture is associated with a multitude of interesting and odd creatures, many of these beings are humanoids. One of these legendary humanoids is the Mono Grande.

The Mono Grande (Spanish for "Large Monkey"), a large monkey-like creature, has been occasionally reported in South America. The first formal record of the creature called "marimondas" or "maribundas" comes from 1533, when Pedro Cieza de León reported sightings from natives and from one Spanish settler. In his writings, Sir Walter Raleigh referred to reports of large monkey-like creatures in South America. He did not witness a creature himself, but deemed them credible, noting the ubiquity and consistency of reports. German naturalist Alexander von Humboldt, who travelled in South America during early 19th century collected stories from Orinoco about furry human-like creatures called Salvaje ("Wild"), that according to Humboldt were rumored to capture women, build huts and to occasionally eat human flesh.

In 1860, Philip Gosse in his book The Romance of Natural History stated that a "large anthropoid ape, not yet recognized by zoologists," probably existed in the forests of South America. More accounts of the animal came to light in 1876, when explorer Charles Barrington Brown wrote of a creature called the Didi. This creature, according to Brown, was a wild man which lived in the forests of British Guiana. He stated that on several occasions he had heard its cries, and on others he had seen footprints identified as coming from the creature.

The best evidence (and most controversial) for the existence of an anthropoid ape in South America's jungles came later, when Swiss geologist Francois de Loys led an expedition to the borders of Colombia and Venezuela and set up camp near the Tarra River. Two creatures emerged from the forest and moved towards the campsite. De Loys noted that they were a male and a female and about five feet in height. He recounts how the creatures broke off branches of trees and waved them at the party. During this assault, de Loys said, the creatures began to howl and screech, and eventually they threw their own dung at the expedition. The party opened fire, and the female was killed. The male retreated into the forest.

The men, realizing that their kill was something out of the ordinary, sat its body on a crate, propping its head up with a stick. De Loys recorded that the creature was skinned, and its skull and jawbone preserved. Perhaps conveniently, these remains of the creature were lost. Nearly a decade passed before the image was made public.

De Loys' friend George Montandon took great interest in the photograph and published it in 1929, dubbing the creature Ameranthropoides loysi. On June 15, in the Illustrated London News, de Loys told the story of what had happened. Almost immediately, de Loys and Montandon came under attack from the scientific community. Many debunkers of the de Loys photo, foremost among them Sir Arthur Keith, proclaimed that the alleged "anthropoid" was actually a normal spider monkey, its tail concealed behind the crate on which its body sat. Furthermore, said Keith, there was nothing in the photo that was a clear measure of the animal's size.

Yet others have established the height of the creature at about five feet tall, saying that most crates of the kind on which it sits are 20 inches in height. The largest spider monkey ever recorded was only three feet, seven inches tall. Keith also dismissed the detail that the ape threw its own feces at de Loys and his men, although it is well-known that some types of ape do this when threatened. Still, most skeptics accept Keith's debunking of the photo.

Ivan T. Sanderson, respected Fortean researcher and author of several books on the subject, also finds fault in Montandon’s claim. Sanderson writes in his book, Abominable Snowmen: Legend Come To Life, "...this picture produced by Dr. Francios de Loys is obviously that of a spider monkey...". After calculating the creatures actual size, he goes on to say, "Thus this animal, with its head poked up to an unnatural degree by a stick, measures about 27 inches. This is a fair-sized spider monkey but not even a large one. The original photograph is not just a case of mistaken identity; it is an outright hoax, and an obnoxious one at that, being a deliberate deception..."

Sightings of the creature have continued to the present day. In 1968, at Marirupa Falls in Venezuela, Pino Turolla heard from a native guide that three Mono Grande had attacked and killed his son with branches. Turolla later found the de Loys photograph, and showed it to his guide. The guide confirmed that Ameranthropoides loysi was the same as the Mono Grande. In the valley where the guide's son was killed, Turolla heard screeches and saw two large, apelike bipeds. In 1971, he claimed to have had another sighting in Ecuador.

In Turolla's memoirs, he makes the following reference to the incident:

"….toward the southeastern slopes of the surrounding mountains. The trail was heavy with mud, the incline made the going even more difficult, and finally I said, 'Antonio, let's stop here and take a break.'
'No, senor,' he said. 'Better we go away from here, out of this area. This is El Mono area.' Seeing the puzzled look on my face, he added, 'Si, senor, el Mono Grande.'
'A big monkey,' I said. 'How big?'
'Senor, el Mono Grande is big like you.'
'A monkey my size?' I said in amazement. 'Six feet tall?'
'Si, senor, Si!'
'Oh, come on, Antonio. Don't tell me such stories. How can there be a monkey that size?'
'Senor, I saw him. My son was killed by one of these monos. They are big. They are strong. They defend themselves and attack you with a club.
'I looked at Antonio, and perhaps he saw the disbelief in my eyes. But his expression was dead serious, and I knew him well enough by this time to know that if he was not sure of what he said he would not mention such things."
"He looked at the picture and an expression of complete astonishment came over his face. He couldn't believe his eyes.
'Where did you get this?' he asked.
Ramirez looked at the photograph over Antonio's shoulder and his eyes grew big.
'From a book,' I replied. 'The animal was shot forty-eight years ago by a Swiss geologist. His account of the incident says that the creature was as big as a human. Do you think this is the kind of animal you saw?'
'Yes,' Antonio said. 'It looks very similar. I've never heard of this incident, but if you have this picture, it must be so.'"