Is the Full Moon an Accessory to Crime and Craziness? 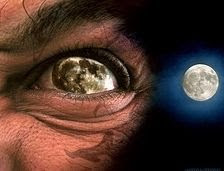 Lunar effect: The lunar effect is a pseudoscientific theory which overlaps into sociology, psychology and physiology suggesting that there is correlation between specific stages of the Earth's lunar cycle and deviant behavior in human beings. The claims of a correlation of lunar phases to human behavior do not hold up under scientific scrutiny. The theory is sometimes also referred to as the Transylvanian hypothesis or the Transylvanian effect in scholarly literature.

Lunacy: Across the centuries, many a person has uttered the phrase “There must be a full moon out there” in an attempt to explain weird happenings at night. Indeed, the Roman goddess of the moon bore a name that remains familiar to us today: Luna, prefix of the word “lunatic.” Greek philosopher Aristotle and Roman historian Pliny the Elder suggested that the brain was the “moistest” organ in the body and thereby most susceptible to the pernicious influences of the moon, which triggers the tides. Belief in the “lunar lunacy effect,” or “Transylvania effect,” as it is sometimes called, persisted in Europe through the Middle Ages, when humans were widely reputed to transmogrify into werewolves or vampires during a full moon.
__________

usatoday - "Western lore has long suggested a relationship between the phases of the moon and various forms of aberrant, antisocial, deviant, and criminal human conduct," begins the Journal of Criminal Justice study led by criminologist Joseph Schafer of Southern Illinois University in Carbondale. "Policing, crime, and criminal justice have not been immune from speculation concerning the lunar-crime relationship."

Cops frequently have complained about crime's rising during a full moon, the study authors note. So have scholars, such as in a 1972 American Journal of Psychiatry report that found murders peaked around Miami over a 15-year period during the full moon. The same report looked at 13 years of murders in an Ohio county, finding no lunar effect.

So it has gone for full moon malice, with a few studies finding a mixed effect on crimes. Overall in the last four decades, most found no lunar link to suicides and homicides, as well as "prison escapes," "hospital admissions for dog bite injuries," and "aggression among ice hockey players," according to the study.

Still, "research has shown that belief in lunar effects continued to be strong, including among police officers and tended to be associated with beliefs in other paranormal phenomena," write Schafer and colleagues. Many of the past studies finding weak or no effects suffered from defects ranging from limited data, weak statistics and even disagreement on lunar phases, raising the possibility the cops are just more observant than criminologists give them credit for. "Officers have the benefit of directly observing the aftermath of criminal incidents; their experiences may provide them with unique insights into lunar effects," says the study, "or police culture may simply perpetuate false beliefs about lunar effects."

So, to find out, the study team looked at San Antonio, Tex., from 2001 to 2005, a city of more than a million people for which exhaustive crime data is available. The team crunched nightly crime data, noting rain, daylight, indoor vs. outdoor locations and other environmental effects unaccounted for in past efforts. Murder happens too rarely in San Antonio to give a statistical signal, so the team looked at assaults, burglary, theft, drugs and vice crimes, traffic crimes, and "other disturbances," totaling about 130,000 incidents a year.

"It is the very error of the moon," wrote Shakespeare in Othello. "She comes more near the earth than she was wont, And makes men mad."

Maybe in Venice, but not in San Antonio, the study concludes. "Substantive lunar effects on crime were not found in the data analyzed here," say the report. "Although popular culture, folk lore, and even certain occupational lore suggested the 'freaks' come out during full moons, this phenomenon was not reflected in San Antonio police data as used here."

Instead, weekends and warm weather were linked to crime, as you might expect. Winter and rain decreased crimes, except in the city's Riverwalk entertainment district, home to bars, hotels, convention facilities, shops, and theaters, where the level of crime was the same regardless of conditions. The only slight effects of a full moon were a small increase in burglaries citywide, and a drop in vice arrests in the Riverwalk center, at the same time. Neither was statistically convincing.

But while the crime data don't show any lunar effects, that doesn't mean people aren't weirder during a full moon, the study authors acknowledge, something unlikely to come across in the dry language of a police report.

After all, the belief that the moon affects human behavior is "deeply entrenched in popular belief," write Robert Bartholomew and Hilary Evans in the "Lunar Influences" entry of Outbreak, the Encyclopedia of Extraordinary Social Behavior. The Roman physician Galen, one of the "fathers of medicine," claimed that epileptic fits were triggered by the moon in the 2nd Century. Disturbed patients in London were flogged during the full moon in the 18th century to halt their expected violence.

"Whether or not the lunar effect has any biological basis, the belief in it may be associated with popular practices," concludes the encyclopedia. "The Moon's phases could thus be a contributing or enabling factor in extraordinary social behavior, whether directly, by affecting people en masse, or indirectly, by affecting especially susceptible individuals."
__________

Full Moon Madness - Old Farmer's Almanac: As the full moon shines bright over Earth tomorrow night, people on the planet may go a little crazy, or so some believe. Having long held mystery and intrigue, the full moon has been blamed for causing a sudden increase in crime, psychotic behaviors, and accidents. Nineteenth century lawyers in England would even argue their clients were “guilty by reason of the full moon” and should therefore not be held accountable for their “lunatic” actions.

Is there any truth to this lunar lunatic theory? If you ask a policemen or hospital worker, you will most likely get an answer in the affirmative followed by stories of crowded jails and busy emergency rooms on moonlit nights. One study conducted in Dade County, Florida, even seemed to support the plausibility of this legend, stating their research showed an increase in the murder rate during full moons. However, the study was later proven flawed, and when the data was reanalyzed, no conclusive evidence was found. And this seems to be the pattern for a number of other studies as well, none of which show any linkage between human behavior and the full moon.

So how you do explain this perpetual myth that so many swear by? Some say it could be simply due to the fact people are looking for a connection. When weird behavior occurs under a full moon, it’s easy to blame it on the moon, whereas when odd things happen throughout the rest of the month, we don’t really think about it.

While there seems to be little scientific evidence to support the full moon lunacy lore, there will always be those who will argue otherwise. You can decide for yourself as the next full moon rises!

Is the Full Moon an Accessory to Crime and Craziness?
Lon Strickler at 2:02 PM
Share
‹
›
Home
View web version