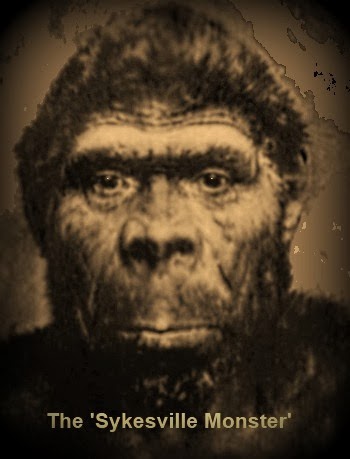 My interest in cryptozoology began the day I witnessed a creature that was beyond my belief or, what I thought, the boundaries of reality. The incident was reported to a BFRO investigator several years ago in hope that they may be able to get further information from local authorities. Unfortunately, this investigator was unable to help.

The date of the encounter was May 9, 1981 about 10:00 am and I was fly-fishing for redeye and smallmouth bass on the south branch of the Patapsco River approximately 1 mile downstream from Rt.32 near Sykesville, Maryland. The weather was sunny and slightly breezy and the air temperature was in the low 60’s. This section of river flattens out into riffles then empties into a larger pool, an area I had fished several times previously.

I was on the south bank near the riffles when I noticed a stray mixed breed dog sniffing around the weeds and thickets on the north bank. The dog was about 50 yards from me and was weaving in and out of the brush. I wasn’t worried about the dog bothering me, so I just put it out of my mind and concentrated on fishing.

After a few minutes or so, I heard the dog barking and growling. I figured that he stirred up a deer, but when I looked at the direction of the ruckus I noticed a dark hairy creature bobbing up and down in the thickets. I stopped fishing and moved closer to the riffles to get a better look and noticed that the dog stopped barking. Suddenly, I heard a loud yelp from the dog and the creature stood up. The best I could tell is that this “thing” was about 7-8 ft. tall and had dark matted hair. I could only see the body from the chest up because the rest of the body was obscured by the weeds and thickets. I stood completely still and could hear a series of “tick” sounds while observing this creature walk slowly through the thickets towards the woods. I started to follow it and in the meantime I noticed a strong musky scent that reminded me of fox urine.

I had waders on so I could only move so fast in an attempt to get a better look at this creature. It simply moved too fast for me. I decided to go back to my car, drive into Sykesville and make an immediate report to the authorities. On my way back to the vehicle, I noticed the dog and it had noticeable blood around the neck and hind area but seemed to be able to get around. I figured I better stay away for the dog regardless.

I drove to the nearest telephone which was located outside a bar. The local police told me to go back to the area and they would meet me there. So I got back into the car (I seriously thought about going into the bar for a minute first, but better judgment made me change my mind) and started to drive back to the river. I was amazed that a Maryland State Police cruiser was already there. The State Police officer told to get back in my car and leave immediately because they didn’t know how dangerous the situation was. I tried to explain to him that I made the initial report, but he refused to let me talk and again told me to leave. I went back to the area about 1 hour later and the place was crawling with people and many state and other official vehicles. One man standing near the road did tell me that someone found some hair samples but refused to say anything else.

For many years, I tried to gather information from local authorities in regards to this incident, but I have always been told that “no information is available” or “we have no report of an incident”. Since that time, I have decided that I would do my own investigations and find information on my own.

I later received this comment to this incident (unedited):

“This sure brings up some old memories. I always expected that sooner or later it would get out. I'm glad someone else saw it and kicked over the can. I'll add beans.

I was one of the responders on that call. Right after we'd closed down the road a government response team arrived. Those guys weren't fooling around. Their big dogs and bigger guns made that evident. It wasn't long before we were locked out: ordered into our cruisers and away from the area. The "into our cruisers" part was the weirdest. We were outmanned, outgunned and outranked by the feds who had taken over. Soon after that, within an hour at most, several choppers were overhead... as in three. It was a manhunt on a larger scale than we could have mustered so quickly, and that is saying a lot.

I've never really been positive what happened. None of our guys had actually seen "it," though I imagine "it" was caught or killed. They said there were hair samples and footprint photos and casts taken. We were debriefed and basically instructed not to speak of this matter. With that I'll close and say no more except that it did happen as described on here.”

At the time, I called the being I witnessed a 'Bigfoot' because, frankly, that was the only way I could have described it. It wasn't human...it wasn't an ape. For over 30 years my encounter with this being had left a strange hole in my understanding of nature and reality.

Over the years, I have tried to gather more information on my sighting as well as other sightings in the general area. Since my sighting in 1981 there have been two (2) more BFRO 'Class A' reports along the Patapsco River Valley and another four (4) general reports and sightings in the same area from 1972-1979.

I interviewed and got to know several of the witnesses of the 1972-73 ‘Sykesville Monster’ flap after my personal encounter in 1981. Many of these witnesses have since passed away. There were other unreported incidents in the general Sykesville and Gaither, MD areas. I personally took statements to eight (8) more sightings / encounters between 1972-1979, including a home invasion on Norris Ave. and a utility shed break-in on Oklahoma Ave. Both were located in Sykesville. There were also several chicken pens broke into up and down the South Branch of the Patapsco River in Gaither, MD - Sykesville, MD - Woodstock, MD - Daniels, MD and Ellicott City, MD. Most of the sightings have been within the Patapsco State Park...which has a history of unusual activity (UFO, paranormal and cryptid) throughout the park. I still live within 15 miles of all the locations.

I decided to come to grips with my encounter and had a sketch or image of the being's face created. I knew that if the image was similar to what I actually witnessed there would be controversy and doubters...but I couldn’t let that bother me.

After making a few inquiries, I was directed to a retired police forensics artist who was a private investigator in Florida. I forwarded all the facial descriptions that I had gathered from the witness' sightings and subsequent interviews. I received the image with a note from the artist that read “are you sure this is what you witnessed? It looks like a rendering of early man except for a few features.” I called him and assured him that this is what I witnessed...this is what we all witnessed. This was the 'Sykesville Monster'.

A few years after my Bigfoot encounter I happened upon an older gentleman named Phil who was fishing on Piney Run near Marriottsville, MD. I had been trying out a new fly rod upstream and confronted Phil as he was packing up gear by his car. We started talking about a few odds and ends when he mentioned that skeletal remains of a large 'human' had been found on the Piney Run south bank not far from where we were standing. He said that another fisherman had chanced upon the bones while he wandered off the trail. After the discovery the man simply mentioned to a few other fishermen that there were bones in that direction as he gestured to the area.

Phil said that he and a companion walked over to the other side of the stream to take a look at the remains. He said that some of the bones were obviously missing but there was a skull without a jawbone as well as the vertebrae, a few ribs and long bones of the arms and legs. There was no visible tissue but there were a few small desiccated patches of reddish brown fur scattered around. Phil said that both he and his companion both muttered at the same time "where are the clothes?" Then Phil said "this is too big to be a human."

This was back in the early 1980's so there were no cell phones. Phil's companion walked to the small store by the Patapsco River Bridge to call the police. As they waited for the authorities Phil took out his fish tape and measured the upper arm bone (Humerus)...he remembered it measure 22 inches. Phil's observations and conclusions were that it was something similar to a large ape or gorilla. He also mentioned that the skull looked very much human but larger.

After the Baltimore County Police and State Police arrived on the scene everyone was advised to leave the area. In fact, Phil said they placed crime scene tape across the road so no one could get within 300 yards of the location. He said he and a few others hung around the general store by the railroad tracks so they could see who was coming and going from the scene. There were unmarked helicopters bringing people on-site as well as several unmarked vehicles. These vehicles were similar to what I had seen after my encounter. There was never any mention on the local news.

As a result of the information I gathered from witnesses and residents I assume that there may have been a breeding population of Bigfoot in the Patapsco State Park. The most recent sighting was in 1993 by an 8 year old boy in the Woodstock, MD area...a few miles downriver from Marriottsville. There was a report filed for a sighting in 2001 at the Liberty Reservoir (witnesses thought they saw Bigfoot on frozen lake). Since the area is now heavily zoned for residential dwellings, it's obvious to me that these creature breeding units have moved on to more natural locations.