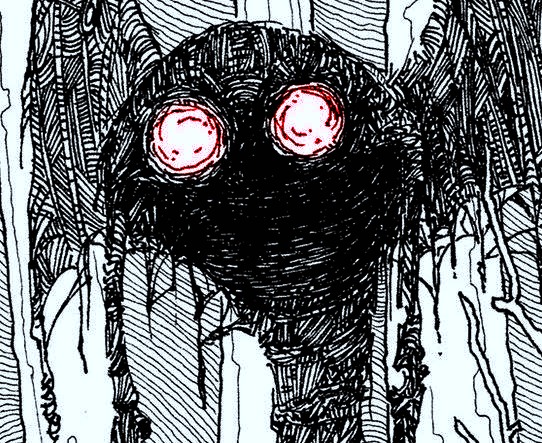 In early autumn 1988 I was at a local exhibition near Baltimore and bumped into Andy, an old friend who was there as part of a group from the Boy Scouts of York-Adams Area Council (Pa.). Both of us had been Boy Scouts together and I was happy to see that he continued as a troop leader. We decided to grab a bite to eat and catch up a bit... it had been 12 years since we had seen each other. After awhile, the subject of my paranormal investigations came into the conversation. He had always been fascinated with ghost sightings at Gettysburg and the surrounding area and had camped near the battlefield on several occasions.

Andy stated that a few of the local troops had recently been camping at the old Camp Conewago and some of the boys had reported hearing "crying" sounds and were spooked bad enough that a few left their campsites early. They had setup their campsites deeper than usual in the woods near the Conewago Creek fork (where the Little Conewago and main Conewago Creek meet). He stated that he and another scout leader were going to check out the area the following weekend and he wanted to know if I'd at least go up for the day and investigate with them. I accepted the invitation.

Camp Conewago is located north of New Oxford, Pa. in Adams County along the main Conewago Creek upstream from Dick's Dam. It was established in 1919 for exclusive use by the local Boy Scouts of America. The area is rich in early colonial history since it was located on a major hunting route used by the Susquehannock Indians. Several attempts to establish settlements in this area failed because of Indian raids. As well, the Susquehannocks constantly warred with neighboring tribes. The Susquehannocks were eventually forced back into northeast Maryland and Delaware and the colonists were able to expand westward into the Allegheny Mountains. The area became an important trading stop for settlers to stock up on supplies and to get updates before heading into the wilderness.

I met with Andy and John the following Friday at the campground. I was shocked at how little the place had changed. A flood of boyhood memories came over me while I walked around the cabins and the administration building. Andy wanted to know how long I planned to stay and that they were going to setup camp in the same area of the reports. I was game... so I told him I'd stay for the weekend, grabbed my gear and followed them into the woods. I suppose we hiked about 500 yards or so before we came to the bank of the creek, then we followed the creek for another 300 yards until we came to the fork. We setup 3 tents and had a nice fire going in short order. It was around 7:00 pm by this time, so we decided stay close to camp for the remainder of the evening.

The first night was fairly uneventful, though I sensed that something was watching us. I didn't say anything but kept my eyes open and head clear. These woods are somewhat thick with ground cover and are inhabited by a fair amount of wildlife, especially white-tailed deer and raccoons. I remember when I was a Boy Scout, the older kids would send out the new members of the scout troop on an initiation "snipe" hunt. They'd give the prospective "hunter" a burlap bag and a flashlight and set them out into the woods at night telling them they could return only after they caught a "snipe". They were usually running back to the campsite within an hour scared to the point of tears. It was a bit cruel, but we all had to go through the indignity... it was a tradition.

The next morning was sunny and cool... a perfect day to explore the woods. We sat down to breakfast when John asked if we heard footsteps and movement during the night. Andy said he slept straight through the night. I said I heard some movement but assumed it was one of my companions. Nothing seemed to be disturbed in the campsite, so we dismissed it... though I still had this lingering sense that we were being watched. We spent the day walking for several miles through the woods and examining points of interest. I wasn't picking up any spirit connections and started to think that this was going to be a quiet weekend. About 6:00 pm we got back to camp and sat down to talk about any little thing that came into our heads.

Later that evening, we were sitting around the fire engaged in a conversation about football when suddenly a scream rang out downstream from our location. I thought it sounded like an owl at first, but a few minutes later it happened again and it distinctively sounded like a child. I couldn't tell how far away it was but it lasted for several seconds and seemed to fade in and out. We got up and walked a few yards into the woods expecting to hear the sound again. It was quiet for about an hour and we were discussing what could have naturally caused that sound. I have heard bobcats, owls and rabbits scream and none sounded close to this. We agreed that it was definitely the cries of a child.

We decided to stay up for the entire night. There was a full moon and much of the woods and creek were visible. At approximately 1:00 am, I was walking the perimeter of our camp when I suddenly felt like something was watching me. I stood still and tried to gauge what was going on. I told Andy and John what I felt and we started to walk deeper into the woods towards the fork. We walked about 50 feet when, without warning, we recognized to our right a large dark figure with bright red eyes standing in the creek... and suddenly it shot straight up into the air with an audible "whoosh". A few seconds later, we heard another scream that seemed to fade as if was moving away from us.

We hurried back to the campsite and compared thoughts about this phantom. Andy was shook up and didn't talk for several minutes until I prodded him for his recollection. John was surprising calm and estimated that it was 6 foot or so, dark in color and seemed to have something extending from its back. I also noticed the structures on the back and commented that it reminded me of wings but I was unsure. We all agreed that it had bright red eyes. This creature or phantom jettisoned so fast that we didn't even have time to get a flashlight on it. Andy wanted to spend the night in the administration building and come back and collect our gear in the morning. He and John walked back, but I decided to stay in the campsite for the remainder of the night. Nothing significant occurred though that feeling of being watched remained.

After the investigation and further research, I concluded that this creature or phantom was more than a simple spirit or energy. I was aware of the numerous sightings of a "Mothman" in West Virginia and it seemed that this being was somewhat similar in description. I and other researchers have investigated this area since our sighting and have come up with minimal evidence, though a report of a dark creature was made by a resident who lived near Dick's Dam a few years later. The investigation remains open... hopefully I or someone else will be able to offer a plausible answer in the future.

NOTE: In 2008, I received an email from a man who lived a mile or so upstream from this incident (near Dick's Dam). He stated that he had heard similar screams for many years and that the frightful sounds continued to this day. A scout leader also emailed me approximately the same time and wanted to tell me that a few of the boys in his troop had witnessed what they described as a 'dragon' that was 6 foot tall with wings and a tail... but looked like it had fur or feathers. He said that the boys seemed serious but thought they were 'showing off' and dismissed their claims until later when he read the account of my experience.

Since that time, I have continued to check up on the area to see if anything strange develops. The Native American folklore and stories from settlers who inhabited the area offer several possibilities as to the identity of this being...but to date, I have not been able to make a natural assessment as to what is being heard or seen. Lon