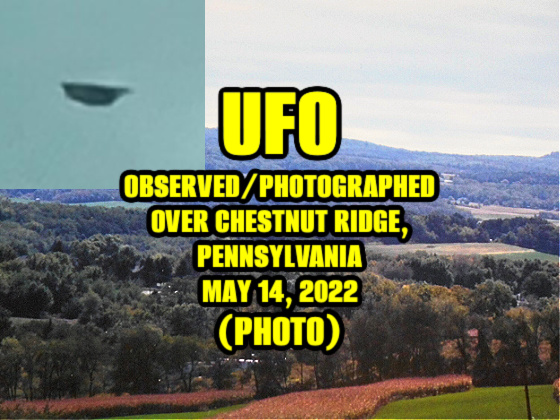 UFO Observed and Photographed Over The Chestnut Ridge in Pennsylvania-May 14, 2022

Enlargement of the object used with permission of the witness

On the afternoon of May 14, 2022, a witness was in his vehicle sitting in a parking lot in the Latrobe, Pennsylvania area when he happened to look up into the sky. That is when he observed an object that was moving at high altitude among the clouds.

The object was moving over a section of the Chestnut Ridge east of Latrobe. What caught the attention of the witness was that the object at first seemed to be moving slowly across the sky then suddenly there was a burst of speed as the object moved out of sight. He was only able to observe it for about 20  seconds.

The witness stated that the object whatever it was appeared black in color, but he could not determine the shape at that distance. He felt that the object would have been quite large for him to see it and photograph it at that altitude. The object can clearly be seen in the photo.

The picture was examined by research associate Jim Brown (www.jimsdestinations.com) who has been analyzing UFO pictures and videos for many years. The photo appears to show a solid black, upside down, domed shaped object with a flat top. 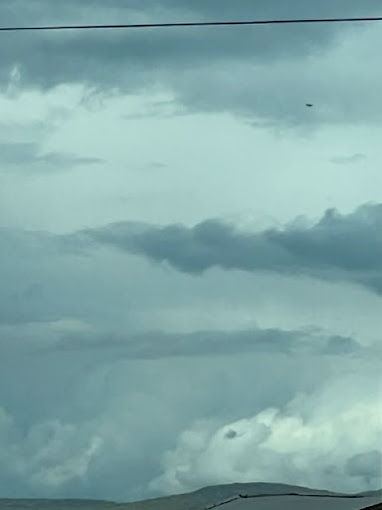 The following is Jim Brown’s analysis of the photograph:

The image as submitted was processed, and the following EXIF data extracted:

I cropped the image to reduce overall file size and enhanced it by:

2. – Increasing the dynamic range across the area showing the object.

3. – Applying false color to increase contrast depth on the object itself.

The results of the processing show some artifacts created by the original compression. For example, note the top of the object and how it appears lighter in the enhancement.  In addition, a slight halo can be seen surrounding the object. This effect is not seen as readily in the original image.  A probable cause of this effect may be artifacts that are being introduced into the enlargement process.  This gives a false coloration along the top of the object.

Another clue that indicates compression is file size The original image is only 52 K, which is very small for an original photograph.  This is a common tactic used by phones to reduce file size. But in doing so, any subsequent enhancement, even using the Weimer Method which attempts to determine intermediate pixel weights, will be subject to loss of detail in the enhanced image.

With these caveats in mind, I went ahead and processed the enhancement. The results are seen in the attached image file being returned with this document.

I did a pixel weight scan in both horizontal and vertical across the object.   This, plus the shutter speed data in the EXIF file can rule out any form of motion blur.   The object as seen is in focus and not blurred due to camera movement.

I did a second pixel weight scan across the dark line at the top of the enhanced image.   This line appears to be a phone cable or similar utility line above the vehicle. While definite distances are estimated, one can assume that the line is 50 – 100 feet away from the camera. The pixel weight scan matches the scan across the object. This would indicate the auto focus was at a point where both the object and the cable were in the same depth of field. Such data rules out a small object near the camera; the object in question was a considerable distance away.

The main issue is the resolution. Due to compression and artifacts in the image no details are present. This makes a final determination of exactly what the object is impossible to determine.  Also note that the presence of clouds prevents any definitive shadows on the object; source light is diffused.  The witness stated the object was moving slowly then jumped quickly out of sight.  While this may be true, the single image here does not show any movement. Thus this aspect cannot be confirmed nor refuted since the single image shows only a single frame.

The object in question appears solid, however no definitive conclusions can be made based on the data as provided.

Phone Disclaimer applies here.  As with all images captured on phone cameras, the compression factor prevents ruling out hoaxing. While no intent at faking anything was detected, the resolution prevents actually confirming the validity of the image.  Conclusions are based on these limitations and cannot be considered definitive.

UFO sighting reports from Pennsylvania have continued throughout 2022. Some of these incidents have been explained. Sightings of the Starlink satellites have frequently been reported as they pass over.

There have also been reports of large, structured objects observed in some areas. UFO sightings have been reported in the Latrobe area, and from locations around the Chestnut Ridge. In recent weeks, daylight sightings of a very large solid object observed at low level were reported in the Ligonier area. There have also been close range observations of small spherical luminous objects low to the ground.