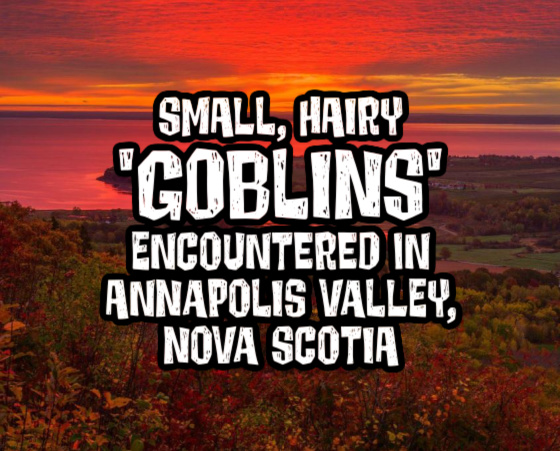 A Nova Scotia man is exploring along a creek in the Annapolis Valley. He soon becomes aware of several small hairy humanoids following him. Quite a bizarre account!

I received the following account from Kyle & Cam at Expanded Perspectives:

"For years I have been exploring the woods, valleys, and caves of Nova Scotia for mystery, history, and adventure. I've seen some things in my younger, less educated years that I assumed was normal because I didn't catch the nuances of mystery. I just rolled my eyes at the tales told from, I assumed, was the bottom of a whiskey bottle as years passed.

Well, it was about 2010 when I was around 30 when things started making me question as I began going alone in the woods in search of caves and historical spots. Whether it was caves in limestone and gypsum of central Nova Scotia and east, or huge crevices in the basalt and granites of the Annapolis Valley. There has always been something to look for or be told about by the elder generations. Treasures, Acadians, Indians, and creatures of unknown origins have all been included in things told to me. And than there are the things NO ONE told me about.

I had read about a find of an old Acadian vase along Bloody Creek around the 1880s, which was then shown at the World's Fair. It was said to have been found in a cave along the shallow but wide creek's upper reaches near the mountain. Over the course of weeks I walked the creek looking on both sides, up to the gravel pit that was quarrying granite gravels, and past it, up the mountain a fair way to an old power dam from the 1890s that provided electricity to a place called Paradise.

It was September, and I decided to cross the creek and look in some suspect areas I had passed by before, but the sun went down faster than I thought it would so I was caught with a piece of junk keychain light to light up about an inch in front of me. My mind was playing tricks on me on the way back and I kept hearing birds in the brook but could not see anything. The following evening I went back with a new headlamp and upon the return seen eyes reflecting back silvery and bobbing up and down behind a rock. I thought an animal had its family there for a drink so I cut away and beat through bush to avoid disturbing things.

I bought a much better flashlight so I could look a lot more after 8:30pm sundown. This was my 4th time I stayed after dark, about 2 weeks after the keychain walk. Once again, I started hearing splashes in the creek following me. The splashes would stop when I turned to look, but this time there were sounds like a bird chirping, a croak like a frog going on, and the eyes bobbing up and down behind sizeable boulders. It was in the final stretch from the creek to the base of the small slope that went to the road my car was parked at that things finally got insane.

I had walked halfway to the slope and noticed it was silent. Not a breeze. Even the creek sounded like it was under blankets in a muffled manner. I turned around to see what was behind me and my world got crazier when I cranked my newest light up to full.

Peering from behind a tree, about 16 inches high, was a round face with a wide mouth and round, silvery unblinking eyes that ducked behind the tree again. To the right near a fallen tree, in plain view, stood a little humanoid that was 18 inches tall, with a dark-skinned wiry muscular body with long white, brown, and grey hair coming from the rounded head and down to the back of its knees, a huge fluff of pubes. It looked like hair grew on the shoulders and back as well when it turned its torso. When it croaked out, I finally came to my senses and seen there were a half-dozen other small humanoids peeking around or walking towards me slowly and most had what looked like sharpened sticks.

I turned around and behind me at the slope was another one with a stick, but I ran frantically towards the slope top. I turned around and saw them hiding, and how it looked with their coloration. They camouflaged into the natural setting quickly. I also seen a big onion bag placed under a spruce tree, filled with vegetables and packaged candy, chocolate, and Spam, along with cheeses in baggies and still mostly frozen so it would all last.

I don't know what I saw, but I knew somehow that bag of stuff would have become my garnishments as I became the main course in some cold hole in the earth. They looked like they had heads very similar to 'Where the Wild Things Are' creatures, with rounded silver eyes that did not blink or move. They looked like silver globes in their sockets, a wide mouth with thick lips, upturned noses, and a body like an African Pygmy.

I went home that night wondering if what I'd seen was from a bump on my head I didn't know about or something. I decided to go back and look in the daytime again, but I stopped and went in from another direction, beside the 101 Highway where it crosses over the creek.

Parting the trees as I walked towards the area of question, I instantly realized it was a bone field I was walking through of a few deer and smaller animals. Many of the bones were chewed on and smashed up. At first glance it just looked like a spot where animals got hit by cars on the provincial highway. Cars don't leave small child-like teeth marks on porcupine bones, nor do they splinter bones on the spot 30 feet off the road, leaving them sucked empty. Cars don't. But carnivores do.

I went back again, but never alone after I realized someone was feeding those 'goblins.' Possibly to keep things safe and left alone as I learned may have been the case at a much later time. And I got a machete for such.

Things indeed, go bump at night...and in the daylight. But that's for later." RT