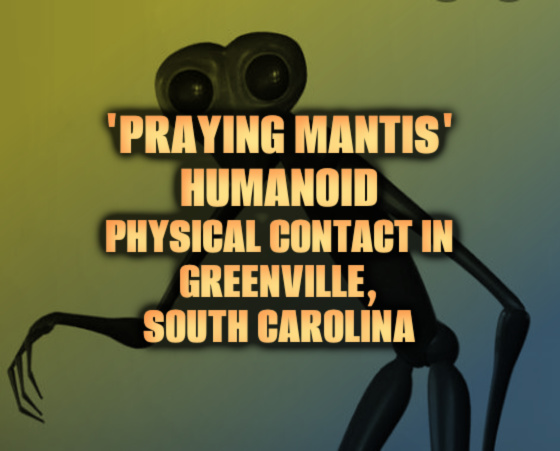 A grandmother recalls her encounter with a 'praying mantis humanoid' when she was a child in a Greenville, South Carolina trailer park. She experienced possibly reproductive intrusion.

This is a review of an account I received several years ago:

"Hi, I'm a 42 year old female, married with grown kids and five grandchildren. First of all, since this encounter, I have never forgotten it. Although exactly what happened is a mystery to me.

I was young, and we lived in a trailer park in Greenville, South Carolina in Mr. Hicums Trailer Park. This would have been in the mid-1970s. All this information has been confirmed by my Mom.

It was a warm and sunny day. I was playing outside with my two older brothers. I was the youngest of three. It was a day like all the others. We were playing tag or hide and go seek. I went to hide. I ran around the back of our home, and suddenly I almost ran into a humanoid praying mantis. At the time I thought it was a giant insect, I could not really comprehend what I was seeing. I felt like all the breath was taken from me. It was taller than my dad and it was standing next to our propane tank. Years later when I thought about it I told my self that maybe there was a gas leak.

Anyway, back to the mantis. I stood there frozen in broad daylight and the creature was just staring back at me. And then everything is blank, until I come running back into our trailer screaming that I'm in pain between my legs. My mother is so concerned that she pulled down my shorts and underwear to inspect. She says nothing is wrong, and I go to sleep crying. This has always been with me. It and this praying mantis stays in the back of my mind.

Then a few years ago I hear about this UFO sighting reported by Highland, Illinois police department. Weird I thought, we moved up there when I was 7 and moved back to SC when I was 10-years-old. I was telling my husband about this thing that happens when I was a kid, we both laughed as I swore it really did happen. So I got curious and Googled the praying mantis aliens. I remember it felt like I was punched in the stomach as I sat there looking at an imagery exactly how I saw it over 30 years ago. I showed it to my husband and he was in shock.

I don't know what happened to me between my encounter and when I came running in screaming about burning down there. I had a real fear of monsters after that and a great deal of nightmares, but nothing like what I saw. It was all about bloody baby dolls inside plastic bags, scooting their plastic bodies around and down the hallways trying to get me. Also another reoccurring dream was a farmer-type man in overalls with a pitch fork walking by all my family members just to get to me. At the end of the dream he would stab me in the chest. This dream started when I lived in Highland, Illinois.

I never was able to give birth naturally either. I had to have C-sections. My father passed away at the age of 38 from lung cancer, I was only 15. It has not been an easy life for me, but I'm a Christian and find comfort in God's word. I have tried to read more about this mantis humanoid creature and have not got a lot of info. Usually when I'm reading about it, right before bed, I fall asleep very quickly and get nowhere. I'm reaching out because I feel like this is really happening, and not just to me. It doesn't matter to me to get attention, via printing a story. I just want to know if you have heard of others like me?

NOTE: CMB contacted me as a result of the Hackettstown, NJ encounters and investigation. As for possible physical contact, this report was a first for me at the time. I have since been involved with several physical contact cases with mantis beings. Most people that have encountered these beings experience severe headaches and mental distress. I mentioned to CMB to feel free to contact me if she wished to disclose further information. Lon