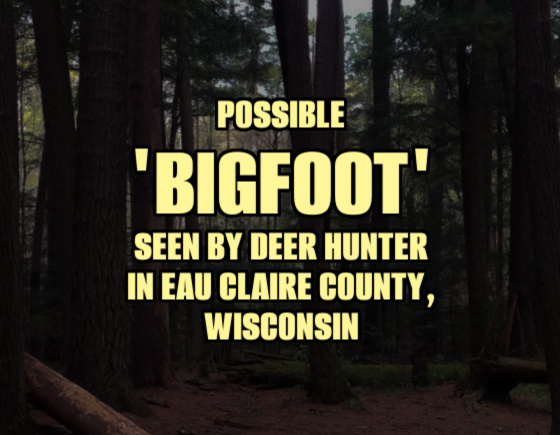 Two deer hunters are in a pine forest in Eau Claire County, Wisconsin. One of the hunters thinks he sees his friend moving ahead off him. Later, he was told that he had never moved. Interesting account.

"My friend and I were deer hunting, early bow season in west central Wisconsin (Eau Claire County). We had scouted earlier and so we knew the area. We drove in and parked, and then walked in off the corner of a couple of fire trails. Maybe 200-300 yards. Total dark forest, but a lot of pine so not much undercover. Somewhat rolling terrain but easy walking. Didn't bring flashlights. I got to my spot, my buddy went on to his chosen location maybe 100-125 yards farther in. He would be roughly on my 10:00 o'clock position. It's probably 4:30 AM. (We wanted everything to settle down. Great location, several deer trails passing through to a swampy area across the road).

It was a nice morning to be in the woods. My eyes became somewhat accustomed to the dark; I could vaguely make out the trunks of the pines surrounding me... black, compared to very dark grey. My shooting lane was pretty open from about my 11:00 - 1:00 o'clock, out to about 50 yards.

Sometime around 5:45 AM, false dawn, my buddy decides to change positions. I see him pass left-to-right in front of me, out about maybe 50 yards. Barely visible. He is crouched over, not making a sound. Passes out of sight. I'm a little miffed. What was the point of coming in so early if we're going to be wandering around? Oh well, it was his area, I was the guest.

Well, after it gets light, and there had been no deer moving at all, I get up, stretch, pack up my stuff and head straight out. Same time, I see my buddy coming back out from the left. I wait until he gets up to me and asked, "Why did you move? And how did you get back to your original stand?"

He looked quizzical. "I never moved." I told him I saw him, gave him the story. He shook his head, "Wasn't me!"

Not many theories will fit this. Another hunter would make sense, but he sure didn't drive in. And his license would have to say 'Quasimodo.' Was it as hunchback bear walking on his hind legs? Very doubtful.

My hunting buddy was a Vietnam vet, and used to talk about the 'Rock Ape' that he encountered once and that other soldiers talked about. I asked him if I may have seen a Bigfoot. He didn't give me an answer.

Then about a month later, he told me that a few years prior to us hunting there, rumors of Bigfoot were being told by several hunters in the region. He never thought much of it, but was a bit surprised when I told him what I saw." JP