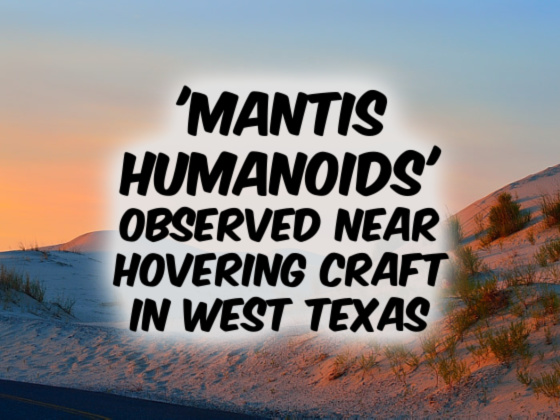 A group of family members encounter an oval-shaped craft hovered in a clearing near Monahans, Texas. They soon observed two mantis-like humanoids walking the area.

"In the Fall of 2009, we were having a family/friends get together to celebrate a birthday. During the celebration two of my nephews and a niece came tearing into the house, screaming at the top of their lungs, saying that a plane crashed in one of the adjacent pastures. My brother, myself and about 3 others walked outside to see what was causing all the ruckus.

We didn't see anything out of the ordinary except a strange burning odor that smelled like burning mesquite. We didn't think anything of it since it was kind of nippy and someone could have been burning some wood in their fireplaces. We told them to show us where they saw the plane go down and we walked over to the place they showed us.

The first thing we noticed was that all the dogs in the area were going bonkers. They were barking up a storm, like they were all seeing the same thing.

The area we live in is pretty much a rural community, unless you live in the city of Monahans, Texas. Many of the houses are set on large plots of land, usually 4-5 acres per house. Although we can see the houses of many of our neighbors and we do have traffic on the road, you do get the feeling of being all to yourself out here. Some of the land by our house is over run by wild mesquite trees. Only a small portion of the land surrounding the house is cultivated and cleared out. Beyond the stand of trees runs a small barbed wire fence that separates us from our neighbors, who I could see were home from the lights on in the house.

We walked around the edge of the trees, not wanting to really go into the stand at night. Even though its technically winter, there could be rattlesnakes seeking shelter in amongst the trees, not to mention that mesquite trees have some wicked thorns that protrude from them. They are razor sharp and quite capable of punching through a pair of jeans or boots and they hurt  to remove.

As we looked around, we started noticing a sort of electrical charge to the very air around us. Almost like the kind you feel when you approach a large electrical substation or a charged and active radio antenna.

As we made our way around, one of my brothers noticed some light peeking through the trees, I told him it was probably one of the neighbors leaving or coming home. He promptly told me that it couldn't be head lights because the light seemed too defused and not as concentrated as a car's headlight.

We moved around and as we cleared the stand of trees, we were shocked to see an oval shaped object hovering, maybe 4-5 feet off the ground. We stood there in total shock, and awe. I can only imagine that our jaws were probably on the ground. As we stood there watching this object hover there without a sound. I took note that the object was maybe about 30-40 feet from front to back, it was maybe the same dimensions around. The object seemed to be of a highly polished material that reflected the area around it. The reflection of the distant street lights from the surrounding neighbors properties seemed to reflect off the surface of the object. There was also a small dull glow to the object, barely noticeable unless you were really looking, almost like an aura of sorts, a iridescent blue of sorts.

As we stood there in total shock, with my brother next to me, we saw two strange looking "men" appear from around the object. They at first didn't notice us, they were busy running around and gathering objects from the ground, from the trees. They didn't seem to notice us at first. They looked to be about the size of my oldest nephew, about 4 feet tall, but they looked very skinny, like they had no meat on their bones. Their heads were large and their arms were long, skinny and hung down around their knee's. About this time my two nephews came walking up behind us (scaring the hell out of us). They saw the object and the strange "men" and in a voice that only a kid can project, screamed out loud "WHAT ARE THOSE THINGS!"

That's when the creatures turned and noticed us. The sight of these creatures was something that will haunt me till the day I die. It turned and looked right at us. Its eyes were large, almost like the eyes of a praying mantis, except they were jet back and wrapped around its head. The two creatures looked at us for about 7 seconds, not an ounce of movement, before they calmly walked around the craft, one right after the other. They disappeared behind the craft and we never saw them again.

A few seconds later the craft lifts up, not a sound coming from the object, no rush of wind, not even a swaying of the nearby branches of a mesquite tree. It rose quietly and hovered about 40 feet from the ground, and shot out like a bat out of hell. As it zoomed away, it started glowing and made it easier to track as it zoomed away getting higher and higher till it faded away.

We stood there in complete silence as we tried to make heads or tails of what we just saw. My brother finally piped up and said, "Should we call the police?" After which, I burst out in laughter and replied to him, "And tell them what?" My nephew looked like he had just seen the devil himself, which considering what we just saw I don't blame him.

He didn't want to talk about it, and after we made our way back to the house, he still didn't talk. I tried to ask him about it yesterday and he basically told me that he didn't want to think about it yet, he was still processing what had happened to him. I was more than happy to leave it at that.

I never really believed in the subject of UFOs or aliens, but after the events of this night, I'm seriously going to re-evaluate that belief.

I know that I plan to keep my mind open, and start looking up towards the sky a little bit more from now on.

We are asking the worldwide public to come forward with your sightings & encounters. Contact me at
410-241-5974
or by email - Thanks. Lon