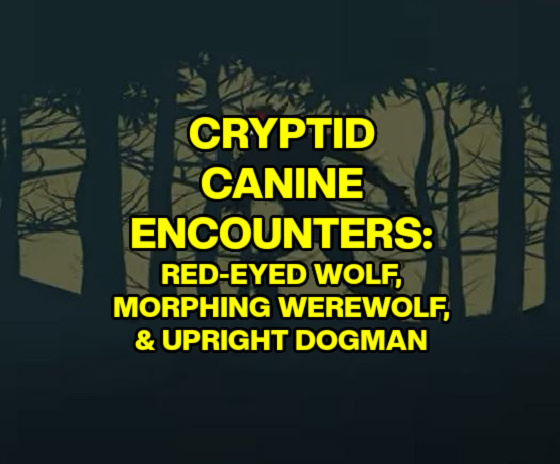 Three separate encounters with unknown cryptid canines in Connecticut, New South Wales, and Quebec. If you have had an encounter or sighting, please contact me.

The following accounts were forwarded to me:

"I saw a big black wolf with glowing red eyes in the middle of the afternoon when I was younger. I was outside of my grandmother's house playing. I ran around to the front yard and on the right side of the house I this this creature. It just stood there and didn’t move at all. Being young it terrified me and I ran away.

Curiosity was also a major factor, so about 15 seconds after I ran away I went back to where I saw it and it was gone. She had a fenced in backyard and where it was standing I would have seen it leave the property. This wasn’t in a rural area either. This was in a suburb in Connecticut. Very big and busy town. Right near the town green.

I’ve searched the internet for years for what this might have been but I have never found anyone having a similar experience. I’ve read tales of similar creatures in dreams or whatnot but never one of them out in a suburb in the middle of the afternoon on a sunny day.

Also it might be important to add that my grandmother did witchcraft or black magic. (I don’t know if there’s even a difference between the two)

There was another time me and my younger brother were inside my grandmother's house and we were walking up the stairs. Keep in mind this is a very old house with a chapel in it with the stained glass window and everything. 3/4 of the way up the stairs we see the literal grim reaper walk from the right side and stop at the top of the stairs and stare at us. We both stopped and looked at each other at exactly the same time so I know it wasn’t our imagination. It then walked into a bedroom on the left. We ran down those stairs faster than you’d think children can run.

I don’t know if these two encounters could be related in some way. I am 25 now and have been wondering for years what those creatures were. And this isn’t one of those made up creepy pastas to scare people. This is legit." MG

"A friend and myself were walking home at about 3 o'clock, in the morning, about 6 kilometers across a small town in New South Wales, Australia from one friend's place to another in which i was living at the time. We were only about 1 kilometer away from home on about a five hundred kilometer stretch of of straight road.

We were walking along a sidewalk, he was pushing my BMX we were just talking shit as we usually did where all of a sudden something caught my eye. Two greyhound looking dogs, but larger than your average dogs in height, probably twice the size.

They ran out of a block of flats/units/apartments(what ever you would call it in your part of the world), and jumped the brick mailboxes on the inside of the footpath on the other side of the road, which stood about three to four feet high and cleared about 12 feet before they hit the road. Both of these dogs landed in the middle of the road, then ran in the opposite direction to which we were walking. As they ran further away they grew larger and larger in size.

While they grew larger they seemed to begin to stand up on their hind legs and morph into some large muscular bigfoot or werewolf looking creature and in my mind I could not comprehend what I saw.

These creatures ran around the corner in the exact direction we walked from and about five to ten seconds after they turned the corner we heard what sounded like a female child scream.

At that point we both looked at each other and I could tell he saw what I'd seen as he was just about to bail on me on my bike. I jumped on the handlebars and he pedaled like I've never seen before, I don't think he skipped a pedal for the whole rest of the trip home.

When we got home we locked the doors and closed the windows and I asked him to explain exactly what he saw to me and to no surprise it was exactly as I had witnessed.

He was an indigenous Australian as was his elder brother. We explained the experience to him and he said it was probably a "Yowie" which I believed at the time. But this story is not typical to Yowie sightings in Australia.

Safe to say this scared me not to go out at night for quite a while.

We told a few people about the experience afterwards but most of the time people would laugh or joke that we were on drugs but I can assure the people reading this the same thing we told them, This was a completely sober experience.

After the joking and carrying on I pretty much kept this story to myself, only telling a select few people who want to hear paranormal stories. I don't try to convince anyone if it's real or not, they can decide for themselves, but, I know what I saw." BB

"I was camping with the Cadet de la Marine Royal du 2-19 Memphremagog in Québec, Canada. I don't remember where exactly for the city, it was 13 years ago when I was a teen.

Here I was sleeping in a army-like tent with the roof not even connected to the floor which create an open space to the outside.

It was summer morning around 6AM when I felt a terrible cold through my sleeping bag for a few minute before opening my eyes and what I saw was...? First thing first. I realized I was outside in broad daylight and in front of me was standing a huge black dog-like thing, 6 or 7 feet away from me. It was standing in an impressive 2.5 metres height. It was on 2 or 4 legs. This encounter lasted less than five second because I thought I was dreaming. I closed my eyes ignoring completely the red flag and felled back to sleep, waking up a few hours later at the same spot, but the black thing was gone.

Now, to be sure, I wasn't dreaming. I finally woke up and look around me to see that I've been drag out of the tent a few feet away. I crawled back into the tent and fall back asleep for the last time. I asked the person that was in the same tent if he noticed that I was gone. He replied that he pushed me to the side of the tent but nothing else. After hearing this, it confirmed to me that these things might exist for real and I've been drag out the tent for some reason." F