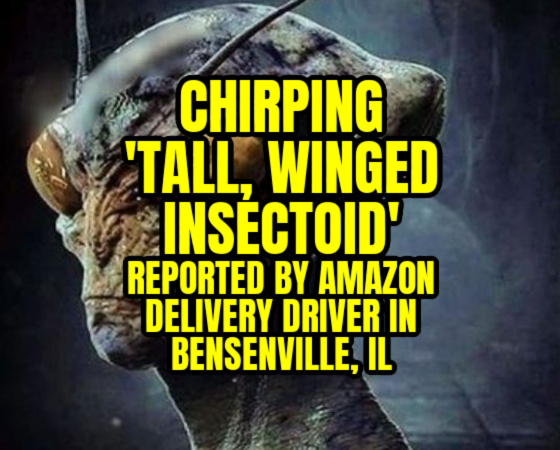 4th sighting of a winged humanoid in the Bensenville, Illinois. As with other reports, this was a tall chirping winged humanoid, but reminded the witness of a flying insectoid.

Number of Witnesses: One

"I work for Amazon as a delivery driver and I was doing my delivery route at about 7 p.m. on May 13th In Bensenville, Illinois on Center Street just south of West Green Street. I had just finished dropping off a couple of boxes at a residence and was walking back to my van when I heard a chirping sound followed by a series of clicks that came in quick succession. I thought at first that it sounded like a woodpecker and that is what I dismissed it as until I heard the same sequence again and it sounded like it was coming from behind me. I turned to look and heard the sound again, I looked toward the sound and I could not believe my eyes.

There on top of the house next door was a tall thin winged person who was looking directly at me. It looked like a giant flying insect but must have been at least 6-7 feet tall. I initially jumped and as I watched it took off straight into the air and just flat out disappeared out of sight. I looked around hoping it had flown out into the trees but never saw it again. I walked back to my van and kept looking up hoping to see it again but did not and the rest of my route was uneventful."

An investigator has reached out to the witness and is awaiting a response. Once further information has been obtained it will be posted to the website. This case has also been forwarded to the Phantom and Monsters Fortean Research Team for further investigation. 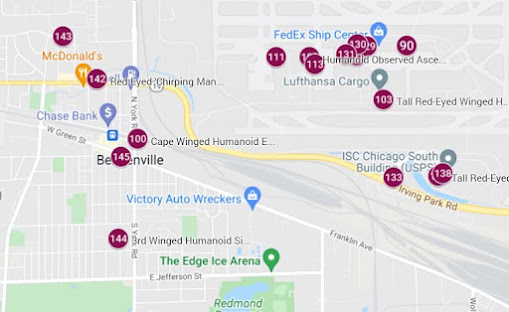