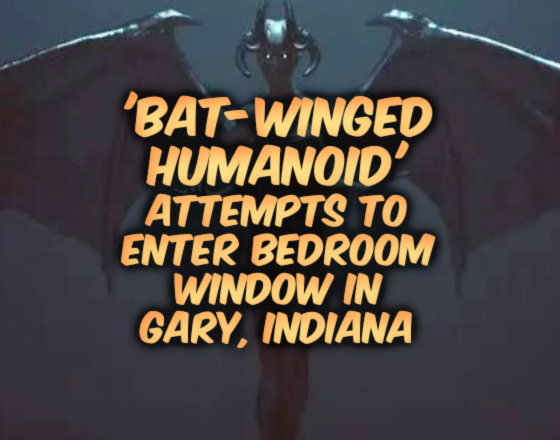 In January of 2019, the Phantoms & Monsters Fortean Research team received two separate reports of winged beings in Gary, Indiana. I recently came across another report from the area.

“Me and my girlfriend had an experience with a flying humanoid bat-like cryptid in 2018. Apparently there were over 100 sightings of this same thing in Chicago and then in Gary, Indiana close to where we live. We were just seeing this large thing on the roof of the house and then I would see it land in the tree outside my bedroom window. And after several months of seeing this large flying thing at a distance we saw it up close when it tried to get in my bed room window. It was a very traumatic experience for both of us. I wouldn't blame someone for not believing this story either, it’s hard to believe but this actually happened.” DP

In January 2019, we received a few of reports regarding winged humanoids / Mothman:

"Hi. My husband and I live in Gary, Indiana. He came home freaking out tonight (Saturday, January 19th) saying he saw something that had to of been 4-5 feet tall with large wings that were similar to bat wings. He said it was a grayish color and it flew in front of his truck just inches of it getting hit, He said it flew up in the trees and disappeared. It was on Chase St.

I don't know if it's the same thing people have been reporting in he area, but it can't be the Mothman...can it? I'm not sure but whatever it is, he's scared him to death." ES

NOTE: the email was dated Saturday, January 19th at 11:11PM local time. I have attempted to talk to the witness, but he is far too shaken and fearful this being will re-engage with him. Hopefully, the witness will eventually open up. Lon

On Monday, January 22, 2019, I received a text message from a resident in Gary, Indiana. I called the witness, RH, to discuss his observations.

RH states that his family had been on their front porch one evening in late September 2018. This was on the 300 block of E. 43rd Ave. in Gary, Indiana. Across the street was a small lot with several tall trees. It was a clear night and the moon backlit the grove of trees.

RH's brother or father noticed a large winged being flying near the top of one of the trees, and made the rest of the family aware of the being. The children were taken back into the house. RH, his brother and father continued to observe the winged humanoid...which was described as having a body of 4-5 ft in length. The wingspan was approximately 10-12 ft, but could have been larger. The entire body and wings were dark in color.

RH stated that body reminded him of a 'large monkey' in shape. The wings were bat-like and reflected in the moonlight. All the witnesses heard a 'whooshing' sound when the being flapped it's huge wings.

The winged being flew into the trees and disappeared.

RH's brother contacted him when he saw my post of the recent winged humanoid sighting in Gary, Indiana. They had not told anyone else outside of the family. At that point, RH texted me.

Have you had a sighting of a flying humanoid or huge bat-like creature? Please feel free to contact me at lonstrickler@phantomsandmonsters.com - your anonymity is guaranteed. Our investigative group is conducting a serious examination of his phenomenon. We are merely seeking the truth and wish to determine what eyewitnesses have been encountering. Your cooperation is truly appreciated. You can call me directly at 410-241-5974 as well. Thanks...Lon Strickler #ChicagoMothman #ChicagoPhantom
Have you had a sighting or encounter?
Contact me by email - Thanks. Lon