The following recent encounter was reported to Manuel Navarette at UFO Clearinghouse:

"I was at work Thursday night (April 28, 2022). I had just brought back a man-lift from a construction site that we had picked up and brought back to the yard. I had just driven the man-lift off of the trailer and was just about to get back into the truck to park it when I saw some movement from the back of the yard. I grabbed a flashlight and headed back toward the storage containers that are kept in the back. I saw something on top of the container and I shined the light on it and asked them what the hell they were doing back there and that I was about to call the police if they didn’t get out of there. I kept walking toward them and yelling when I heard a series of clicks, rapid-fire clicks and what sounded like chirping. I’m a bit of a history buff and back in WW2, U.S. troops used to carry these clickers called “crickets” that they used to communicate with one another. This sounded like these clickers only faster and louder, same pitch and tone.

I was about 12 feet from the containers, I looked up and was met with a pair of red eyes that were staring directly at me. These were attached to what looked like a tall being that must have been at least 6-7 feet tall and looked like a giant man-bat kind of thing. I lost it and started backing up while trying not to scream like a little girl. This man-bat was partially lit up by the lights we have around the yard. I tried to shine my flashlight on this thing and it started clicking at me and took off into the air. It took off toward the north. I practically ran back to the truck and got in and parked it. I swear to God, I sprinted toward my car, which was parked by the main building where it was lit up by the street lights. Thoughts of something swooping down to attack me were swirling around in my head. I got in my car and left, not stopping till I got home."

An investigator has reached out to the witness and more details will be posted as soon as possible. NOTE: When we receive further information, I will add it to this post. The 'chirping' sound is a new aspect relating to this phenomenon. Lon

I reached out to the witness and they were initially hesitant to speak and asked me to call them back before I was able to convince him to speak with me in regards to his sighting. The witness works for an industrial rental company where they service and rent a wide variety of industrial equipment. The witness is a driver for the company and has been there for about 3 years, the witness describes his job as delivering and picking up various pieces of equipment. The witness stated that they had picked up a man-lift ( portable piece of heavy equipment used to raise and lower people used for various construction projects) The witness had just arrived back at his employer and had just dropped off the equipment and was in the process of parking his semi and trailer when he saw the entity.

The witness stated that they had a row of transportation containers along the back that were used for storage purposes and it was there that he had seen movement and decided to investigate. The witness stated that he thought it was an intruder looking around the containers looking to steal tools or equipment. He stated that had reached into his truck and had pulled out a large Mag-lite flashlight which is a long flashlight with a sturdy metal handle that can be used as a baton. He stated that as he walked toward the containers he saw something standing on top of the containers and that as he got closer he noticed a pair of bright red eyes looking directly at him. He estimated the entity as standing about 6-7 feet tall and described it as a “Man-Bat” For reference purposes, Man-Bat is a supervillain appearing in comic books published by DC Comics. Introduced in Detective Comics #400 as an enemy of the superhero Batman. Phantoms and Monsters Fortean Research Team member Vincent Richardson did prepare sketches based on the witnesses description and they will be posted in the report below for reference purposes.

The witness did state that as he approached the containers he started to hear clicking coming from the direction of the entity. The witness described the clicking as sounding as coming from a WW2 era clicker, commonly referred to as a “cricket” by Allie soldiers. These devices were handheld brass clickers used by soldiers to communicate and identify each other during nighttime raids. They were most famously used by American Airborne soldiers of the 102nd Airborne division. The witness stated that the sound was similar in tone, only faster and louder and only got faster and louder as he approached the storage containers. As the witness approached the containers he stated that the entity stood up and took flight toward the north and was out of sight within seconds. The witness described running back to his truck and then after parking it, running to his car with an overwhelming feeling that something might swoop down and attack him. The witness stated even when he got home he could not shake the feeling and stayed in his car for 2-3 minutes before getting out and going home. The next day the witness did some research online where he found our contact information and submitted his report. The witness appeared to be sincere in his recounting of the events of that night and did not change any of his story and even corrected the investigator when he tried to purposely embellish the story. The next step will be field investigation and with the witnesses permission, that will be conducted at the earliest available opportunity. 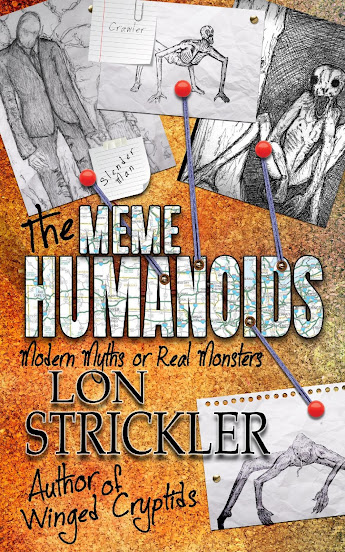 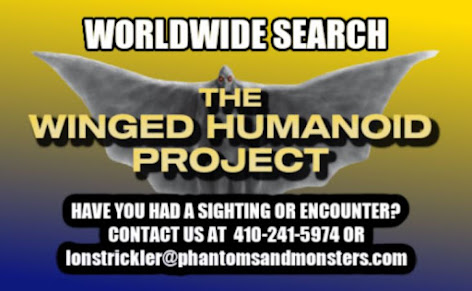 Because of recent revelations involving the winged humanoids (The Unseen Ones), we are asking the worldwide public to come forward with your sightings & encounters. Contact us at
410-241-5974
or by email - Thanks. Lon