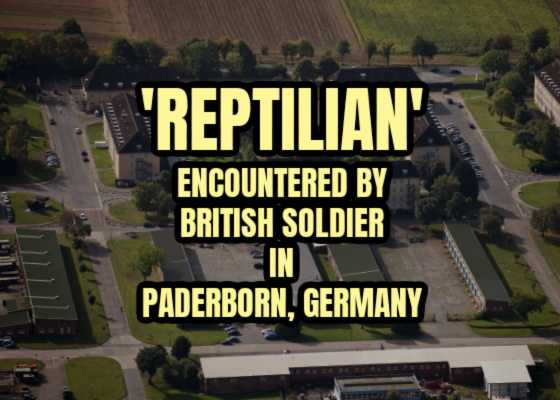 A British soldier, stationed in Germany, experiences a Reptilian being one morning in his barracks. The encounter was later reported to his superiors, who likened it as a vivid dream.

The following account was recently forwarded by a reader:

TT joined the British military when he was 20-years-old in 2008, as part of 3 Close Support Battalion REME. He was stationed at Barker Barracks, Paderborn, Germany. In January 2011 he slept on the 2nd floor of Block 2. There were two other soldiers sleeping in the same room.
One Saturday morning TT awoke alone in the room. One of his roommates had been out drinking all night and had not returned to the room, the other had spent the night with his girlfriend. He thinks the time must have been around 9 am, but didn’t check the clock. He was facing the window and the morning sun was in his eyes so he rolled over.
When he did, he immediately became aware of a 6-foot-tall lizard-like being standing about 1.5 metres away from the edge of the bed. It was slightly transparent, bipedal, and slightly hunched over him. The skin of its arms and legs was covered in green scales, although the chest area was smoother. It had a lizard-like snout and mouth, and eyes with vertical slits in them. The being was largely unclothed other than a belt around its waist. Around the belt were what looked like silver-coloured cylinders. TT estimates there were about 12 of these cylinders. Each was 2.5cm wide by 5cm long.
TT froze not knowing what to do. He was both shocked and puzzled by the presence of this strange being. He did not shout out for help as he was trying to process what was taking place. The Reptilian stood still also, although TT could see it breathing. It felt to him that it was surprised he had woken up. They stared at each other for about a minute. Then he suddenly felt drowsy and dropped off to sleep. It was as though the being had implanted the thought to go to sleep into his mind.
TT estimates about 10-15 minutes later he awoke again. The being was no longer present in the room. He lay still in bed for around 10 minutes trying to process what had taken place. In the end he worked up the courage to get up. He picked up a small blunt object to use as a weapon. He then began searching all around the room, half expecting the being to still be present.
After a while of searching and discovering it had definitely gone, TT went over to his laptop. He had the word “Reptoid” in his mind, but did not know why. He searched for the word on the internet and up came some pictures of Reptilians. Upon seeing the similarity of the drawings to what he had witnessed he briskly closed the laptop, quite un-nerved. The reality that others were reporting the same type of being that he had seen was quite shocking and frightening to him.
Not long afterwards he left the room and went about his normal morning routine. He did not speak about the incident with any of the other soldiers as he felt they would not believe him.
For the next two years TT did not mention the incident to anyone. However on a phone call in 2013 his father mentioned to him a book he had been reading by David Icke called “The Biggest Secret.” In the book David talks about his theories regarding the Reptilians. When his father mentioned this to him, TT decided to tell his father about what happened.
In May 2014 TT decided to inform his superiors about the incident. He told two lieutenants and his sergeant. One lieutenant put it down to a dream. The other suggested he should speak with a doctor. His sergeant claimed to believe his story but could offer no further advice.
NOTE: TT had no interest in UFOs or ETs contact prior to his experience. An aspect of the experience is the way in which TT could slightly see through the being. TT had the distinct impression that it was the belt around the being which was causing this effect although he was not told this directly. Is it possible that TT was abducted and experience lost time?
This installation was once under Nazi Wehrmacht control. From the 1930s, the barracks was home to "training and replacement tank battalion 500." The majority of crews for the Tiger tank, to crew the independent German heavy tank battalions, were trained here. Lon